https://arxiv.org/abs/1809.01197v1
Building up spacetime with quantum entanglement II: It from BC-bit
Mark Van Raamsdonk
(Submitted on 4 Sep 2018)
In this note, we describe how collections of arbitrary numbers of "BC-bits," distinct non-interacting quantum systems each consisting of a holographic boundary conformal field theory (BCFT), can be placed in multipartite entangled states in order to encode single connected bulk spacetimes that approximate geometries dual to holographic CFT states. The BC-bit version of a holographic CFT state corresponds to a geometry that can be made arbitrarily similar to the associated CFT-state geometry within a "causal diamond" region defined by points that are spacelike separated from the boundary time slice at which the state is defined. These holographic multi BC-bit states can be well-represented by tensor networks in which the individual tensors are associated with states of small numbers of BC-bits
Spinnor
Gold Member

Demystifier said:
@atyy something for you:
http://lanl.arxiv.org/abs/1807.05998
A solution to the chiral fermion problem: 1+1D U(1) chiral fermion theory realized by a truly local lattice model with U(1) on-site symmetry
Juven Wang, Xiao-Gang Wen

I clicked on the above link and got a warning from Google Chrome. 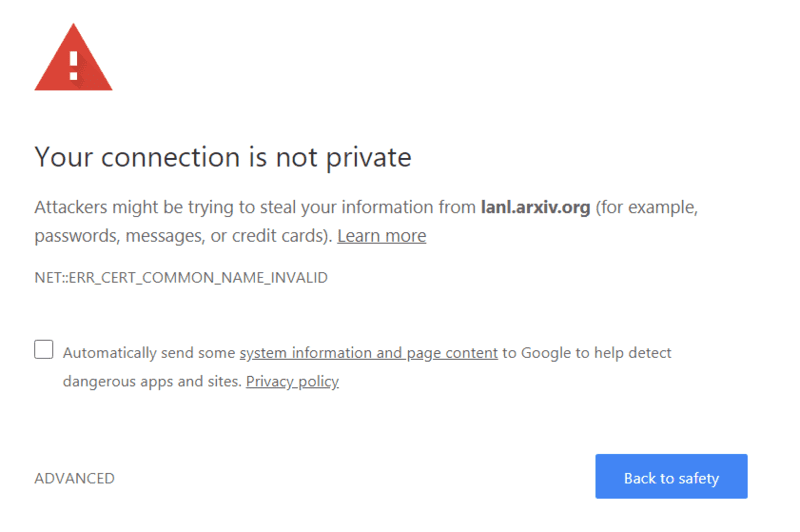 which Google tells me is a safe connection.

https://arxiv.org/abs/1902.10157
Holographic Tensor Networks in Full AdS/CFT
Ning Bao, Geoffrey Penington, Jonathan Sorce, Aron C. Wall
(Submitted on 26 Feb 2019)
We present a general procedure for constructing tensor networks for geometric states in the Anti-de Sitter/Conformal Field Theory (AdS/CFT) correspondence. Given a state in a large-N CFT with a static, semiclassical gravitational dual, our procedure produces a tensor network for the boundary state whose internal geometry matches (a discretization of) the bulk spacetime geometry. By invoking the "holographic entanglement of purification" conjecture, our construction can be made to capture the structure of the bulk spacetime at sub-AdS scales.
atyy
Science Advisor

https://arxiv.org/abs/1905.08255Entanglement Wedge Reconstruction and the Information Paradox
Geoffrey Penington
When absorbing boundary conditions are used to evaporate a black hole in AdS/CFT, we show that there is a phase transition in the location of the quantum Ryu-Takayanagi surface, at precisely the Page time. The new RT surface lies slightly inside the event horizon, at an infalling time approximately the scrambling time β/2πlogSBH into the past. We can immediately derive the Page curve, using the Ryu-Takayanagi formula, and the Hayden-Preskill decoding criterion, using entanglement wedge reconstruction. Because part of the interior is now encoded in the early Hawking radiation, the decreasing entanglement entropy of the black hole is exactly consistent with the semiclassical bulk entanglement of the late-time Hawking modes, despite the absence of a firewall.
By studying the entanglement wedge of highly mixed states, we can understand the state dependence of the interior reconstructions. A crucial role is played by the existence of tiny, non-perturbative errors in entanglement wedge reconstruction. Directly after the Page time, interior operators can only be reconstructed from the Hawking radiation if the initial state of the black hole is known. As the black hole continues to evaporate, reconstructions become possible that simultaneously work for a large class of initial states. Using similar techniques, we generalise Hayden-Preskill to show how the amount of Hawking radiation required to reconstruct a large diary, thrown into the black hole, depends on both the energy and the entropy of the diary. Finally we argue that, before the evaporation begins, a single, state-independent interior reconstruction exists for any code space of microstates with entropy strictly less than the Bekenstein-Hawking entropy, and show that this is sufficient state dependence to avoid the AMPSS typical-state firewall paradox.
Share:
Share

I Falsification of LQG

I Evolving laws of physics?

A Barbero-Irmizi and LQG observables?

A Any model or theory in physics akin to "Law without law"?

A How does LQG describe gravity?

I Primordial neutron star -- a new candidate for dark matter

I Why do representations label the edges in LQG?

A Branes with any number "n" of dimensions and laws of physics?

I Models and theories of laws of physics emerging from chaos?