b) An anomaly that can occur in controlled rectification is drift of the firing
angle on one half cycle, so causing an asymmetrical waveform, as illustrated opposite. State the effect, if any, this would have on the harmonic content of the waveform.

Show the "asymmetrical waveform, as illustrated opposite. " so we can see what it is the author has in mind ?.

I can tell you from experience that it takes surprisingly little asymmetric firing to produce a DC component in the controlled waveform that'll burn up relay coils.

Try evaluating your integrals from (pi/3 ± a few degrees) to (the next zero crossing) and find a relation between degrees of asymmetry in firing and DC content of resulting controlled waveform..

An incandescent lamp will be indifferent but an inductive load won't. 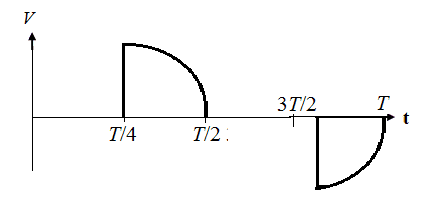 Apologies i didn't add the image. So are you saying to integrate the sine wave between T/4 & T? Sorry only thing i found in my notes was very little other than the statement above.

Connorm1 said:
View attachment 229332
Apologies i didn't add the image. So are you saying to integrate the sine wave between T/4 & T? Sorry only thing i found in my notes was very little other than the statement above.

Connorm1 said:
View attachment 229332
Apologies i didn't add the image. So are you saying to integrate the sine wave between T/4 & T? Sorry only thing i found in my notes was very little other than the statement above.

Connorm1 said:
Apologies i didn't add the image. So are you saying to integrate the sine wave between T/4 & T?

You asked about the effect of asymmetric firing.
The image you posted shows asymmetric firing?
positive for one-quarter cycle duration T/4, from T/4 to T/2
negative i can't make out looks like from 1.5T to T which is backward.

Here's what i meant to suggest
Clearly the black quarter circles have equal area and if you integrate them individually you'll get two equal magnitude but opposite polarity numbers that'll sum to zero. That's what average value is, area uder the curve.

If you offset your firing points by n degrees to show asymetric firing you'll get unequal areas that'll no longer sum to zero.
So that wave will have a DC component or ofset. That'll show up as the first term of your Fourier series should you choose that approach.... 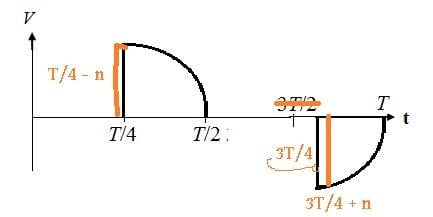 In my day i'd have written a Qbasic program to generate a table of DC offset vs firing angle asymmetry. You young guys have Excel and Matlab to do the same thing.

I'd add another column to show the integral of voltage because for an inductor current is the integral of voltage.
An asymmetrically firing thyristor will burn up an AC relay coil connected to it ,
i've experienced it myself.
We had a batch of temperature sensitive thyristors that went asymmetric as they heated up.
That resulted in several trips of a nuke plant, and at a million bucks per trip it was well worth tracking down the cause and learning how to prevent it..
We found by observing the relay coil currents with a clamp around current probe and oscilloscope that asymmetric firing showed up as distorted sinewave current with high peaks on only one side of the wave.
We looked at every such relay driver in the plant and fixed those showing asymmetry . That stopped our epidemic of relay coil failures.
Needless to say management was very happy.

I hope that little tip helps you someday.
Make yourself painfully aware of the inductor's integral-derivative relation between volts , current & flux. It has so many practical applications that you need it to be intuitive.

ps sorry to be so slow getting back to you. sickness in family, i was away for a few days..

Can anyone suggest any reading material that I can study to better improve my knowledge in answerin question 1 b)?
Share:
Share