As described in Wikipedia as well as this entry http://physics.stackexchange.com/qu...xplanation-of-the-equivalence-principle-wrong,
"being at rest on the surface of the Earth is equivalent to being inside a spaceship (far from any sources of gravity) that is being accelerated by its engines." Even more fundamentally, in an elevator in space, how do you know you are moving at a constant speed or are stationary?

I am confused about something. Consider the following situation: 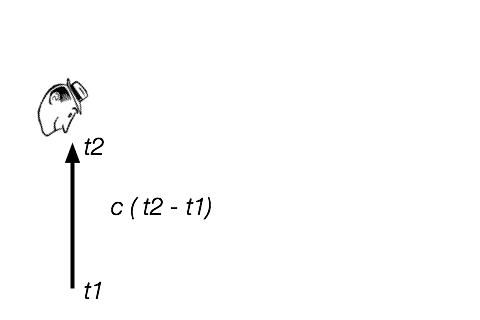 An alien with spectacular vision (that can resolve time differences on the order of 10^-12 seconds) is in a train that is stationary and is looking at a light that is very briefly pulsed on-off about a meter away from his eye. The light is pulsed at time t1 and he perceives it at t2.( even though it has been off for a long time by then). Now consider the situation when the train starts to move. 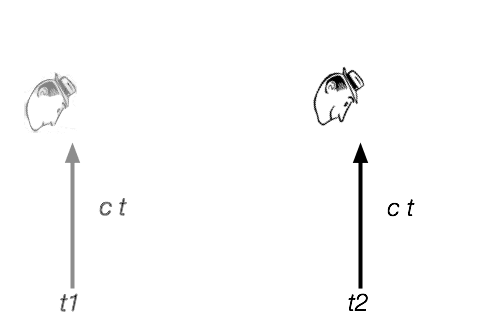 The alien sees the same event. There are no windows and there is no way the alien can get information from outside the cabin. According to the fact that the train is not accelerating but moving at a constant velocity, nothing the alien can do should tell him that he is moving. But consider which photons the alien is seeing. 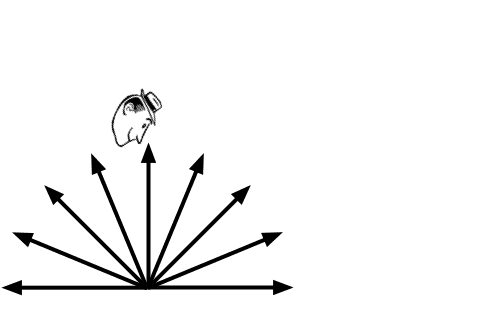 When the light is pulsed, the photons go in all directions. In a stationary train, the alien sees the photon going straight up, but in the moving train, the photon that reaches his eye, is the one that takes off from the light at an angle. 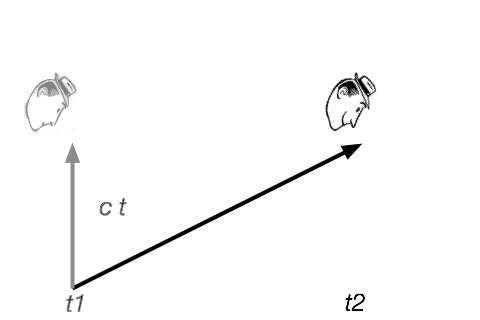 Now make a stencil with numbers cut out on it like so: 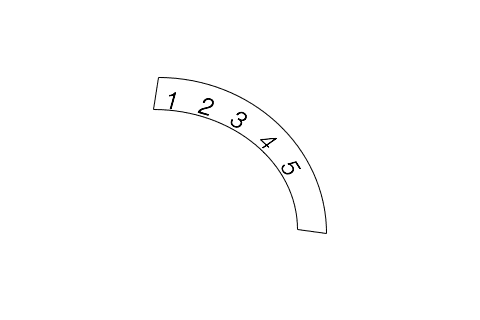 and put it right over the light like so: 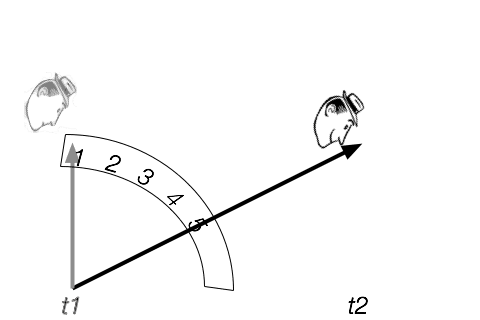 Please forgive the scale. I wanted to make the numbers readable so I made the mask very large. You might be tempted to say that by the time the light pulse traveling obliquely reaches the mask, the mask will have moved so the alien will really see a different number (2 maybe?). But make the mask really small so it is really close to the source. And make the stenciling really small so you can resolve small differences.

So it seems to me that such a 'light speedometer' can tell us how fast our frame of reference is moving even without any information from outside our frame. It relies on the fact that we know the speed of light is constant in all inertial reference frames. This seems to suggest that we can distinguish inertial frames of reference. It goes all the back to the idea of Newton who spoke about absolute reference frames here
http://plato.stanford.edu/entries/spacetime-iframes/

Please note, I have not made any claims about time or the concept of simultaneity. I am not discussing special relativity. Yet the concept of the space elevator introduced by Einstein now bothers me. With such a 'light speedometer' shouldn't I be able to know how fast I am going in an absolute sense?

An observer in the train (top) infers the thing is moving vertically up and down.

An observer on the ground (bottom) infers the thing is "sliding sideways" in a zig-zag path.

This is valid in both relativistic and Newtonian mechanics.[/QUOTE]
Last edited by a moderator: May 7, 2017
Dale
Mentor
Insights Author
2021 Award

@ Dale The alien CANNOT see a 1 because the photons from the light pulse that carry the '1' information are going straight up. By the time those few photons reach where his head should be, his head has moved on. The photons that strike his eye at t2 are not carrying '1' information. The only photons that reach his eye at t2 are traveling obliquely. All photons intercept the mask early in their travel so the oblique ones carry '5' information. This is because at the very beginning at t1, vertical photons are labeled 1 and oblique photons are labeled 5. For simplicity, I postulated a very brief light pulse at t1. When the '1' mask is under his eye at t2, there is no light. The train is not going at the speed of light.

@greg I am NOT considering what anyone sees outside the train. The mask, the light and the alien are ALL in the train. Your drawing attempts to illustrate relativity between two different reference frames - one stationary and one moving. I am only looking at what is going on inside the train.
Last edited: Mar 23, 2016
Orodruin
Staff Emeritus
Science Advisor
Homework Helper
Insights Author
Gold Member
2021 Award

bwana said:
The alien CANNOT see a 1 because the photons from the light pulse that carry the '1' information are going straight up.

You are (wrongly) assuming that the scale is not moving. It will go through one because the scale (and therefore the one) moves with the train. If the scale does not move with the train, it will not go through 1, bit the alien will attribute this to the scale moving relative to him so it is no longer the same experiment.

This is nothing but abberation of light - it travels in different directions in different frames. You can obsreve abberation when you drive on a rainy day - all the rain seems to be coming from the front, but in the Earth rest frame it goes straight down.
Ibix
Science Advisor
Insights Author

@bwana - DrGreg's answer is correct. Your last diagram is wrong. It shows (viewed from an inertial frame in which the train is moving to the right) where the alien is at the time of the emission and where it is at the time it sees the pulse. But it only shows the stencil at the time of emission, not at the time the pulse passes it. If the number 1 is a fraction ##f## of the height of the train above the source, the travel time of the light is ##\Delta t##, and the horizontal travel of the alien in that time is ##\Delta x## then the light pulse will be at the same height as the 1 at time ##f\Delta t##, at which point the 1 will have moved horizontally ##f\Delta x##. In other words - right on your diagonal ray.

You can't get out of this by making ##f## small, which is what I think you are trying to do. You can only avoid it by making ##f=0##, in which case all the numbers are in the same place and the ray goes through all of them.
Dale
Mentor
Insights Author
2021 Award

You seem to forget that the mask is travelling at the same speed too. If he sees a 1 at rest then he sees a 1 at any uniform velocity. The 1 selects obliquely moving light when it is moving. You should work out the math on this.

The size of the mask and it's distance to the source are not relevant.
Last edited: Mar 23, 2016
DrGreg
Science Advisor
Gold Member

bwana said:
@greg I am NOT considering what anyone sees outside the train. The mask, the light and the alien are ALL in the train. Your drawing attempts to illustrate relativity between two different reference frames - one stationary and one moving. I am only looking at what is going on inside the train.

Just look at my top diagram and ignore the pale blue gridlines and the pink diagonal line. The red ball is moving vertically up and down, i.e. in the "1" direction of the stencil attached to the train. There's a vertical U-shaped black "tube" on the floor of the train that is effectively the same thing as your stencil.

If you had another stencil attached to the ground, the bottom diagram shows how the ball would be measured by that second stencil in the "5" direction.
pixel

This same basic question has come up more than once recently. Here is a post that I started last year:

pixel said:
This same basic question has come up more than once recently. Here is a post that I started last year:

Thank you. That was helpful and I apologize for recapitulating an already explained topic. Specifically, this sentence

'The same applies to photons, which have impulse just like the ball'

I also appreciate the time everyone took to answer. I know I did not use fancy math but it was the underlying model of light on which the fancy math is based.
Dale
Mentor
Insights Author
2021 Award

bwana said:
I know I did not use fancy math but it was the underlying model of light on which the fancy math is based.

But you didn't use the underlying model on which the math is based. If you had then you would have gotten an answer which agreed with the math.

Do you feel that you have now adjusted your mental model to understand how the "1" selects obliquely moving light?
bwana

Indeed. Photons behave just like billiard balls. The only difference is that we do not have any tool that travels faster than they do. As a result we need to use relativistic corrections when studying them from different reference frames.
Orodruin
Staff Emeritus
Science Advisor
Homework Helper
Insights Author
Gold Member
2021 Award

They most certainly do not. They behave as excitations of quantum fields. If you do not feel comfortable with that you should probably refer to "light pulses" instead of photons.
Share:
Share

I About inertial reference frames and logical deduction
2