Draw the electric field lines and equipotential lines for the electrode configure. Assume one of the parallel plate is at a positive potential and the other one is grounded.

It'd be great if someone could look it over to see if I'm on the right track. Thanks! 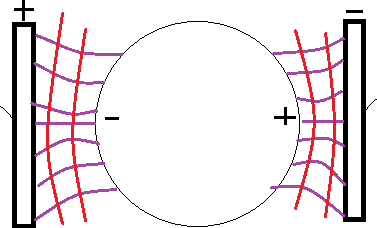 red ones are equi. pot. surfaces and purple are field lines

Close to the surface of a plate, the E-field should remain about parallel, but as you get closer to the conducting surface, the E-field bends more sharply toward its center.

The E-field at any point between the plate and the conducting surface = E_plate+E_surface (Vector Sum). The E_plate is constant for all space. The E_surface could be modeled as a dipole centered at the center of the surface with aggregate negative charge half-a-radius to the left and aggregate positive charge half-a-radius to the right along the central line. If you consider that only one end of the dipole primarily interacts with the region near its plate, then it looks like a point charge. Then points equidistant from the plate but farther away from the "aggregate charge position" have a less pronounced E-field in the direction of the center of the surface.

Also, the lines should not enter the material parallel to the horizontal central line because close to the surface of the conductor, they would point toward the "aggregate charge position."

Though I may have convoluted that explanation, that's my conceptual two-cents. I like tmilford's diagram better.
ads891

hey guys, don't mean to hijack this post, but how would i go about drawying equipotential and field lines for a small circle within a large one, off centre, toward the edge? is there a program to automate this?
i thought of drawing a square outside each of the circles and drawing a line from each corner, then rubbing out those squares and the result is something that looks right, although i'm not quite sure. any help?
Share:
Share