Two long, parallel and perfectly conducting rails at a distance l = 50 cm from each other are placed in a homogeneous magnetic field with magnetic induction B = 2 mT, which is perpendicular to the rail plane. The rails are conductively connected at one point.
Electrical resistance of the connection is R = 5 Ω. A perfectly conducting rod slides on these rails with a constant speed v = 2 ms-1. Determine:
a) the electromotive force induced in the conducting rod, the value and direction of induced electric current in the closed part of the circuit,
b) the mechanical pulling force needed to keep the rod at the constant speed and mechanical powe 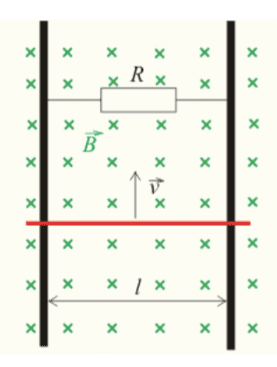 I agree with you. The convention is that a cross is into the page (circle with center point is out of the page) and then ##\vec v \times \vec B ## points to the left.

Any indication in the solution (which solution?) that they have the red rod on the top of the picture, having passed the resistor ?
Log in or register to reply now!

Related Threads on Electromotive force induced in a conducting rod

How does change in current induce electromotive force