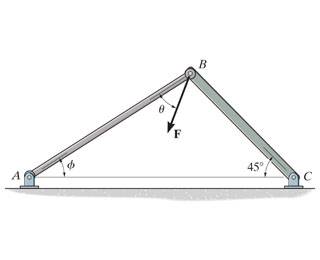 Which means everything I did was wrong.
So what triangle magic do I do to get from the initial problem, to the final F=870 θ=34°, without doing something so complicated I need Wolfram Alpha to crunch it out?

Start over with the two simpler equations. You'll get a different value for θ and F.
Xovvo

what do you mean by that? Because F=870 and θ≈34° are set in stone Those are the answers for this problem.
Doc Al
Mentor

And yet you know that:

Xovvo said:
Those are the answers for this problem.

Why not just solve it using that trig substitution. You'll solve it easily without needing Wolfram.
Xovvo

Says The homework. Because I've already gotten this question wrong, and the answers were displayed. I'm asking about this question here so I know what to do when this sort of problem comes up again.
Doc Al
Mentor

Xovvo said:
Says The homework. Because I've already gotten this question wrong, and the answers were displayed.

Do you not agree that the given answers do not work? That they contradict the problem statement?


Xovvo said:
I'm asking about this question here so I know what to do when this sort of problem comes up again.

I would solve it in the manner described above, so you can get a straightforward answer.
Xovvo

The given answers don't work for Fcos(θ)=600, no. But that could mean either Mastering Engineering flubbed or, more likely, I flubbed the starting equations.
Share:
Share

Friction force applied at an unknown angle to horrizontal plane

I
Unknown angle in equilibrium

P
Work done by force on an angle

Modulus of rupture at an angle

Finding angle and Forces in a system

I
Finding an angle in 3D