The bracket shown in figure 1 is applied to both ends of a beam (figure 2) which experiences a single static load at its center. The bottom of both brackets are fixed by some method, so it can't deflect. According to Solidworks, the bracket survives with flying colors, but it bothers me that I can't seem to get similar results with a simple hand calculation. I thought about treating the brackets like a wall and solving for a beam with fixed ends, but when I apply it to a physical object, I get stumped. In college, we're always concerned about the deflection of a beam and the flexural stresses, but we never consider all the different ways that a bracket can be employed and the different types of supports that it represents. How would you solve a problem like this? 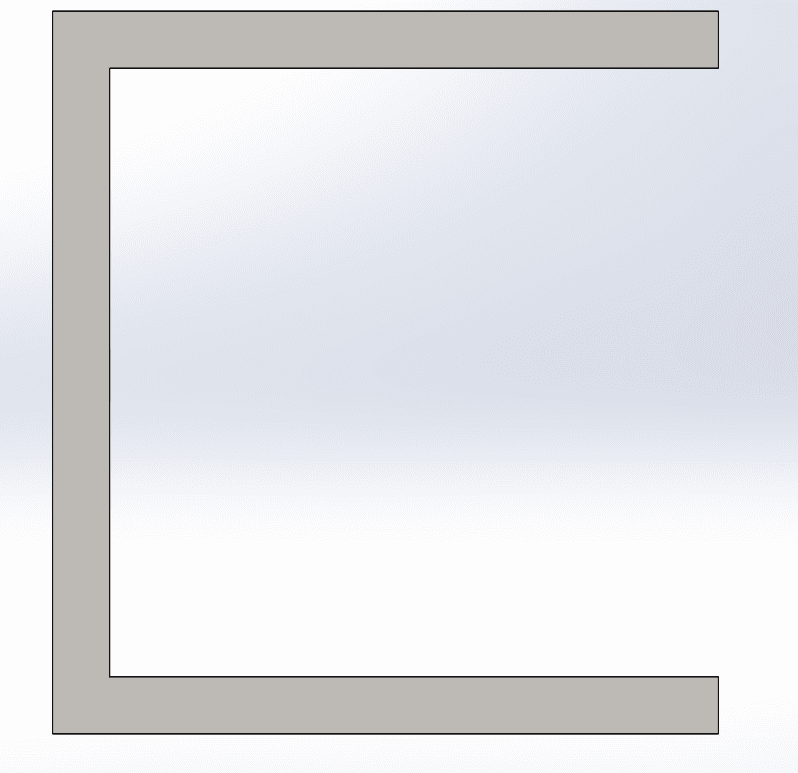 For clarity, here's the set-up:

Analyze the beam as simply supported at the ends to see if there is any significant reduction in bending deflection. If not, then the primary stresses on the brackets are shearing of the the bottom plate connection to the back plate, tearing of the back plate at the structure connections and shearing of the fasteners connecting the bracket to the adjoining structure. PS If it is a static load at the center of the beam then don't show a series of distributed loads in your illustration.
Satonam

Thanks for the reply!

In this case, there isn't much deflection (~0.003"), but if there were significant deflection, then that means that the bracket is exerting a reactive moment on the beam. How would you analyze a situation like that? Where on the bracket is the moment affecting?


JBA said:
PS If it is a static load at the center of the beam then don't show a series of distributed loads in your illustration.

I only left it distributed because a uniform distributed load should be similar to a point load at the center.
JBA
Science Advisor
Gold Member

In addition to the above stresses you would also have a moment on the bracket that results in a tension on the back plate to structure top retaining fasteners and shearing on the top fasteners connecting the bracket to the top of the beam.
Satonam

Makes sense, but then how do you determine what those forces are? If the center load is F, then the shear force experienced by the bottom of the bracket when there is no deflection is F/2. However, when significant deflection occurs and the bottom is fixed so as to not deflect, the beam's end will deflect upwards and push against the top of the plate. As you said, now we have tension on the back plate and shear on the top plate. Are those forces also F/2? When does the magnitude of M factor in to the equation of stress in this scenario?

I was thinking of treating this scenario as a cantilever beam with a fixed end. If the end of a simply supported beam deflects 1", then the force a bracket would have to exert on that end to prevent the deflection is the same force that causes a 1" deflection on the cantilever beam. Would you agree with this reasoning?

But then, even if my reasoning makes sense, when modeling the cantilever beam, how long should this beam be? If I use the same length as the original beam, then I get a very small force; but if I model the cantilever beam to span the length of the bracket, I get a much higher force -which seems more reasonable to me compared to the previous case, but I still can't tell whether it's a reliable assumption.
Last edited: Jun 6, 2019
JBA
Science Advisor
Gold Member

The deflection profile for a cantilever beam will be different from that of a center loaded beam; but, assuming the bracket will not allow any rotation of the beam end then a comparison might be to use a cantilever beam 1/2 the length of the original beam with and end load 1/2 of the original load to calculate the moment about the beam end bottom edge to obtain a pull away force on the top of the bracket.
At the same time, I really do not know how accurate this representation would be (it would on the conservative side but probably too much so).
Satonam

I'm getting a very different deflection, so I guess this method isn't reliable either... Real life is very different to academics it seems. Heh.
JBA
Science Advisor
Gold Member

I didn't like that analog very well either so just took time to look at my Machinery Handbook chart of Stresses and Deflection in Beams and for Case 19 Fixed at Both Ends, Load at Center the answer to your problem is presented right there, because it shows that the reaction moment at each end of the beam = WL/8 which the moment that your end plate will see about its lower edge and using the end plate height gives you the separating force of the beam on the top of the plate.

Edit: Amazing what you can find in books
Satonam

JBA said:
...the reaction moment at each end of the beam = WL/8 which the moment that your end plate will see about its lower edge and using the end plate height gives you the separating force of the beam on the top of the plate.

This is what I wanted to know. I know the value, according to those tables. What I'm not certain is how to apply them considering that the connection between the wall and the beam is treated as a point with reaction forces and moments. But, in the given case, if we zoom into that "point", it becomes a bracket. So the moment we calculate is acting on the bottom plate of the bracket? How would you use the height of the bracket to determine the separating force?

See figure 1 for clarification of the problem I'm posing. In figure 2, if the bottom plate is fixed so it may not deflect and the beam is bending, the red circle indicates a point of stress due to contact between the bending of the beam and the top plate's resistance to that bending. My impression is that the usual reaction forces we solve in Figure 1 are the sum of forces and moments acting on the bracket -however, to truly design a bracket, we would have to expand all the forces represented by that value in the location that they're applied.

If R1, according to the table, is W/2 and M is WL/8, R1 is the sum of vertical forces acting on the bracket while M is the sum of moments. But if we expand R1 and M into its components, what does its distribution look like? We can confidently claim that the greatest component for R1 acts on the bottom plate of the bracket and therefore any other component is irrelevant, but what about the moment? I'd say the moment is shared somewhere between the bottom plate (as shown) and the red circle. Is what I'm trying to say make sense? 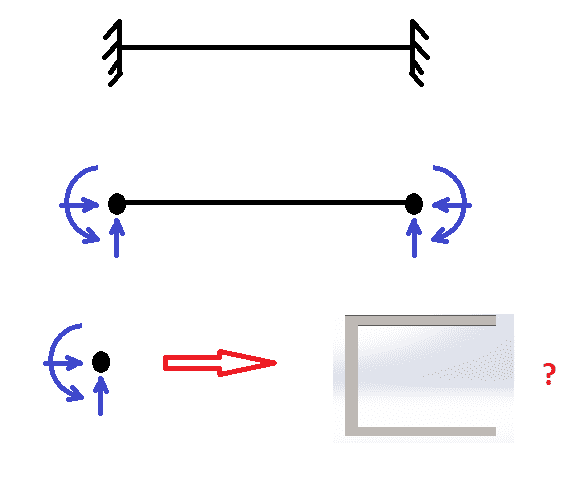 Deflection of fixed beam with point load at center

Deflection of Prismatic Beam With Fixed Ends and Single Load

Load Distribution of a Beam with Multiple End Connections

Resultant moment of beam fixed at one end