In Einstein's book, "Relativity: The Special and General Theory", he uses the Fizeau experiment to show how the Lorentz Transform correctly predicts the addition of velocities.

I have some difficulty understanding the interpretation of the results, however. Suppose that liquid M is in reference frame F, and liquid N is in reference plane F'. Also, N is moving at velocity v wrt M. When light travels through M, assume the velocity is measured as u wrt F. If light were travelling in N, I would also expect it to travel at velocity u but this time wrt F' since firstly, the medium (N) is at rest in F', and secondly, Einstein says that the speed of light does not depend on the frame of reference. According to this principle, I would also expect light travelling in N to travel at speed u wrt both F and F'.

This is analogous to the moving train wrt a platform example, where a light shone from the front of the train would have a measured speed of c in both the reference frame of the train, and of the platform.

Why then does Einstein use a principle of additive velocities to calculate the new speed of the light?


thanks for the help,
Aaron

Hi Doaaron, a precision may be useful here: it's a postulate of relativity (based on Maxwell's theory) that the speed of the source has no effect on the speed of light.
The train example was meant to illustrate how the same speed of light in (near) vacuum can be measured with measurement systems that are in relative motion.
doaaron


thanks for the reply. I was aware of the stuff you mentioned (I think), but I still have a few doubts.

First, does air count as a medium, or not? If it does count as a medium, then the original results in Michelson and Morley can be explained by movement of the medium (air), and SR is not needed. I understand of course that the Michelson and Morley experiment has since been performed in vacuum, but I'm wondering how people concluded in favor of SR over movement of the medium (at the time).

Another question. In theory if your experiment consists of a light source, and a light receiver, then neither movement of the source nor the receiver should have any effect on the measured speed of light. I wonder if any experiments have been performed with a moving light receiver. Obviously such an experiment would be more difficult to set up. My curiosity is from looking at mechanical waves such as sound. For sound, I think that the speed of the source has negligible effect on the speed of the wave, but the speed of the receiver would be directly related to the measured speed of the wave (I'm not too sure about this, but that's my intuition).

I'm actually reading Einstein's book on relativity so more questions will be coming.


thanks and best regards,
Aaron
harrylin

First, does air count as a medium, or not? If it does count as a medium, then the original results in Michelson and Morley can be explained by movement of the medium (air), and SR is not needed. I understand of course that the Michelson and Morley experiment has since been performed in vacuum, but I'm wondering how people concluded in favor of SR over movement of the medium (at the time).

Hi one of the starting considerations of SR was the Fizeau experiment (see the last paragraph of that section), and which showed that a moving medium has only little influence on the speed of light. In fact, the index of refraction of moving air is close to perfect vacuum; just plug in some numbers in the Fizeau equation and you will see that the speed of light is only little affected by moving air.

As far as I know, no theory that assumes light to move at c' relative to a material medium can explain the Fizeau equation as well as many other effects that SR correctly predicts/postdicts.

Also with sound, the speed of neither the source nor the receiver has any influence on its speed until it reaches the receiver - perhaps you confounded the speed of the detector relative to the used reference system with the motion of the reference system itself?
Tests with moving light sources have also been done as you can find in the Physics Faq: http://www.edu-observatory.org/physics-faq/Relativity/SR/experiments.html#moving-source_tests

The Faq mentions elsewhere experiments with Sagnac devices which have rotating source and detector, and a variant with glass as medium shows again the Fizeau effect. Such devices are used as gyroscopes.
http://math.ucr.edu/home/baez/physics/Relativity/SR/experiments.html#Sagnac
compare: https://en.wikipedia.org/wiki/History_of_special_relativity#Experiments_by_Fizeau_and_Sagnac

And as a matter of fact, the GPS system is continuously verifying that neither moving sources not moving detectors have any effect on the speed of radio waves.
Last edited: Jan 6, 2015
doaaron


thanks for the reply.

It was just poor intuition. Since you pointed out my mistake, I have a better picture of it in my mind. Thanks for the links.

I thought that I had understood your point here, but now I'm not so sure. So I've illustrated my experiment below.

In the experiment, we send either light or sound from a source, and calculate the speed of the wave as (d1 + d0)/(t1 - t0). My understanding is that for light, the calculated speed will be c regardless of v. However, for sound travelling in a stationary medium such as air, its speed in a stationary frame of reference will be independent of v, but the speed calculated by the receiver, (d1 + d0)/(t1 - t0) depends on v.

So where am I going wrong?

P.S anybody is welcome to respond. 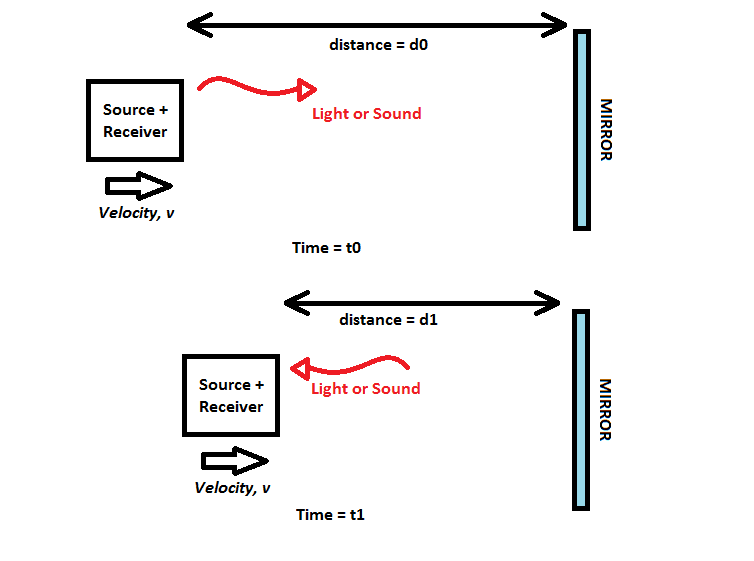 I Fizeau's experiment and TRANSFORMATION OF VELOCITIES

C
I Michelson–Morley experiment as proof of Special Relativity