Forces in a homogeneous electric field

I was wondering if anyone could help me out with this one:

Problem statement:
A charged metal ball is hanging from a nylon wire in the space between both plates of a loaded capacitor. The ball has a mass of 9.2 grams. The distance between the hanging point and the ball's centre of mass equals 71.7 cm. After the ball has been charged, it horizontally moves 4.3 cm. See this illustration for the forces working on the ball: 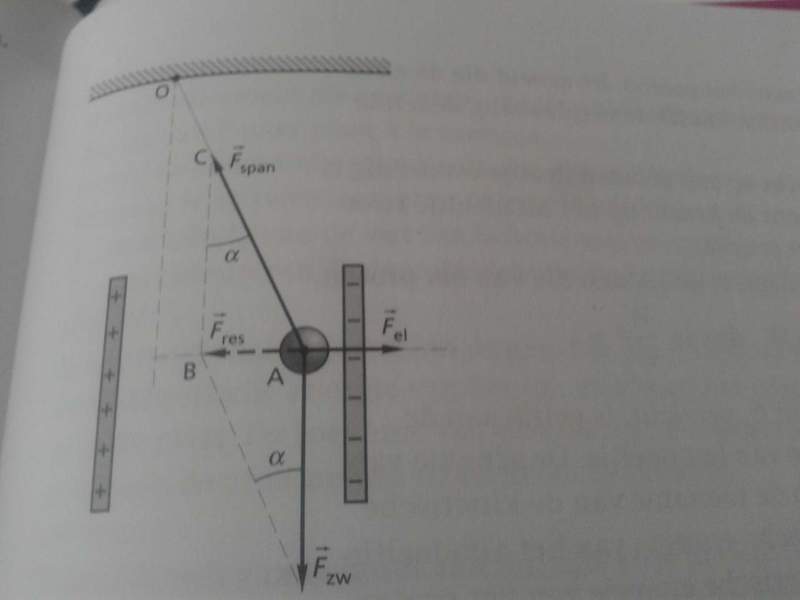 Calculate the electrical force working on the ball.

My attempt at solution:
The gravitational force equals 0.0903 N which is equal to the vertical component of the tensile force. I'm actually already stuck right now because of the following problems:

1. I don't see how to calculate the angle α because I only have one side of the triangle.
2. I don't know how to write an equation for Fel because the presence of a nett force doesn't allow me to set it equal to the horizontal component of the tensile force.

Thank you very much in advance!

1. You have two sides; the length of the wire and the horizontal displacement.

Thank you for your reponse! I see how to work it out with similar triangles now :)
You must log in or register to reply here.

Related Threads on Forces in a homogeneous electric field

Electron moving inside a region of homogeneous electric field

Problem concerning a mass with charge in a homogeneous electric field

Homogeneization of physic formula of electromagnetic field and velocity

I can't get the concept of electromagnetic induction in a homogenous magnetic field.

Free fall of straight wire in a homogeneous magnetic field

Calculating the Inertia Tensor of a Homogeneous Sphere

Moment of inertia of a non-homogenous cylinder