Two blocks are positioned according to the figure. Block A (80 lb) is attached to a rope as such that it doesn't slide or fall from block B (120lb). Compute the smallest value of Force to be applied on Block B for it to not move parallel to the inclined plane. 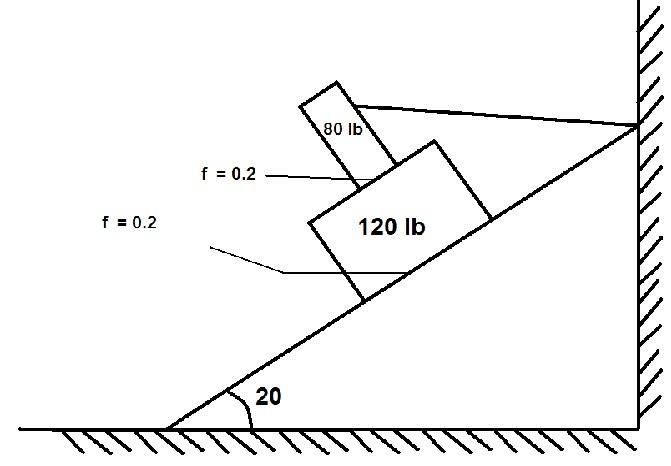 Here's how I did, I assumed that Block B is sliding downwards parallel to the inclined plane.

Then I compute the Frictional force between block A and B, so

W = 80 lb
N = 80cos20
Friction forceA&B = 0.2(80cos20) direction is upwards parallel to inclined plane, because it will resist the downward sliding motion of Block B.

Then compute for Friction force between Block B and plane, so

Then I compute for the sliding magnitude of Block B, assuming it will slide because of none external force acting on it other than friction

I equate F2 as my answer because that's the only force left in the system needed to be countered..... so my force needs to be acting upward...

When I substituted all values.... it gives me a negative answer force... so does that mean... I'm wrong?

First off, the angle between the rope and wall is not given. If as shown, it increases the normal forces you calculated, and you would need to know that angle. But secondly, it doesn't appear that the lower block can move as shown in the setup, even if the rope was parallel to the incline. Is this problem stated and illustrated correctly?
Share:
Share

Suggested for: Friction of Two Blocks and Rope Problem

Friction problem of a ring

Circular motion of rope and ball