"Hence the partial derivatives ru and rv at P are tangential

I've been looking at the equation for r tilde prime in the image I attached below, but I cannot understand why it is that they say "Hence, the partial derivatives ru and rv at P are tangential to S at P". 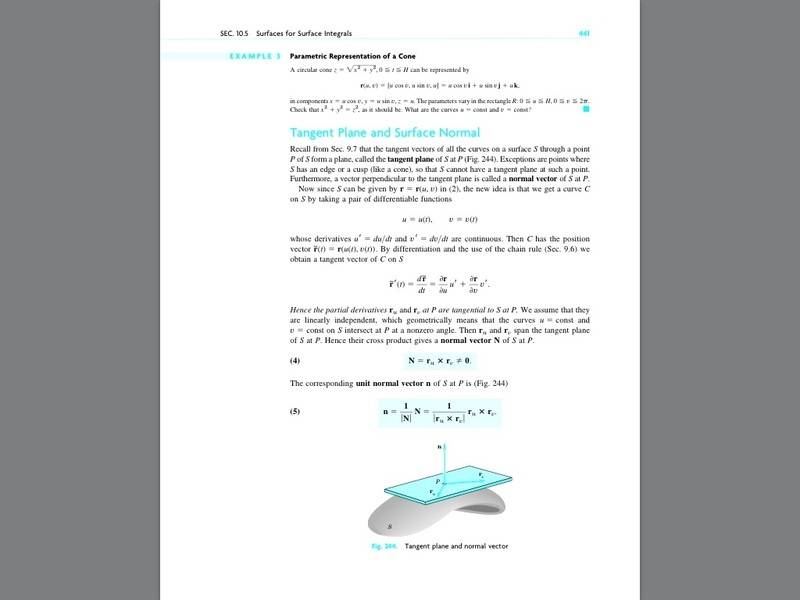 How does that equation imply that ru and rv are tangential to P?

When you parametize a surface and have some position function ## r=r(u,v) ## that defines the surface, you can vary u and v independently and any new value of u and/or v (e.g. ## u_1 ## and ## v_1 ##) will give a location ## r=r(u_1,v_1) ## that is also on the surface. As a result, if you allow just u to vary infinitesimally (keeping v constant), you will move along the surface and your direction of motion will be tangent to the (two-dimensional) surface. Likewise, infinitesimal variations in v (keeping u constant) will also cause you to move tangent to the surface, i.e. the motion is somewhere in the plane that is tangent to the surface at that point. Normally the motion caused by varying u and the motion caused by varying v are not colinear. The two partial derivatives (by taking a vector cross product) will give you a vector normal to the tangent plane at that point(i.e. perpendicular to the surface).
Ssnow
Gold Member

Is as in one dimension where the angular coefficient of the tangent line of a function ##f(x)## is the derivative in this point. In this case you have that the surface ##S## is a function of two variables ##f(x,y)## so the partial derivatives generate a plane (not a line!) that is the tangent plane at ##P## ... I simplify a lot with the hope to clarify the concept ...
Share:
Share

M
Theorem that says partial and ordinary derivatives are mixed?

H
I Partial and Full derivatives
2