How do plasma particles interact with a magnetic field?

How does plasma particles (ions, electrons, neutral particles as a whole) interact with an applied steady-state magnetic field? If you have plasma at atmospheric pressure ejected from a plasma torch in the z-axis direction (upwards/north), how will two permanent magnets, axially aligned N-S to N-S in the x-direction (left to right across the page/screen) interact with the plasma to deflect it, specifically, at what angle would the plasma be deflected at in the y-direction?

rca3g7 said:
How does plasma particles (ions, electrons, neutral particles as a whole) interact with an applied steady-state magnetic field? If you have plasma at atmospheric pressure ejected from a plasma torch in the z-axis direction (upwards/north), how will two permanent magnets, axially aligned N-S to N-S in the x-direction (left to right across the page/screen) interact with the plasma to deflect it, specifically, at what angle would the plasma be deflected at in the y-direction?

Your Profile page says that you have a Master's degree, and are working on your PhD. From your question, I'm guessing that your MS degree is not in Physics or Engineering? Can you please tell us a bit more about your educational background? Have you learned vector calculus yet? That would help us a lot in answering your questions about plasmas and magnetic fields. Thanks.

Also, it's helpful to know what density of a plasma you are talking about. At very low plasma densities, you may just be able to use the Lorentz Force for simple calculations (are you familiar with that equation?).

At higher densities, you have to deal with some pretty complex fluid dynamics effects, as addressed in the classic Plasma Physics textbook by Chen (and others).

Finally, is this question from your homework? 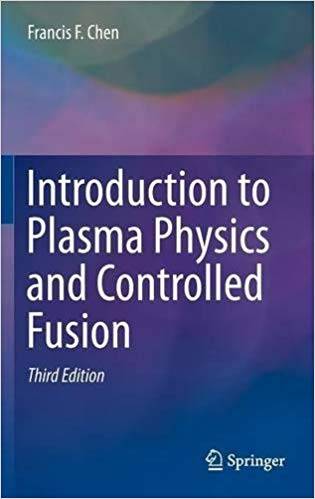 Thank you for the reply! I am a PhD candidate in Mechanical and Aerospace Engineering. I do have Chen’s book as it was the first place I turned to in attempting to answer this question (not a homework problem). I am familiar with the formula you proposed however, it is for single particles perturbed by an electric and/or magnetic field. I am more so trying to expand on the problem of what happens to plasma (as a collective group of ions, electrons, and heavy/neutral particles) at atmospheric pressure, with a high number density upwards of 10^21 persay in LTE or, based off Dalton’s law of partial pressures, having a degree of ionization of 10% let’s say as a sufficient yet arbitrary value.

My goal is to determine what is the best way to approach this problem, and if possible, an equation or system of equations which would allow me to determine the deflection angle of the plasma should it be deflected by an external steady state magnetic field.

Most information on this (magnetically deflected arcs) seems to be oriented towards transferred arcs or free-burning arcs and not towards non-transferred atmospheric pressure plasmas.

I kept my post vague initially in an effort to not hinder views or thwart help on the subject matter so I hope this clairification makes sense. Again, thank you for your help.
kimbyd
Science Advisor
Gold Member

That does sound interesting for sure. Unfortunately I haven't really dealt with this kind of thing, so I don't know precisely how it's done. I do know that what you're looking for is likely to fall under the header of plasma hydrodynamics.

All that said, one way to try to make headway might be to treat the plasma as if it were a thermal gas of charged particles. If you did that, you'd have a distribution to use for the momenta of the individual particles, which could be used to estimate how the motions of the particles would be changed by the application of a magnetic field. You may have to consider feedback effects, where motion of the plasma changes the electromagnetic field.
rca3g7

To continue the discussion:

Should the magnetic field be strong enough, the particles will become entrapped as in the case with magnetic mirrors.

When dealing with the Lorentz force equation if there is no externally applied electric field does E=0 in the Lorentz equation or, because of the existence of both electrons and ions, is there an induced electric field that must be taken into consideration and thus a self induced magnetic field?

When solving the Lorentz force equation you can set

which can be used to then relate to the centripetal force and thus deduce the radius of the orbit of gyration of the particles about the magnetic field line.

Is there some way to determine if the particles will stay "attached" to the magnetic field lines or rather be slingshot around them thus producing a deflection angle from their incident trajectory along the x-direction? In other words, what requirement is there that a particle has to gyrate around a magnetic field line?

Related Threads on How do plasma particles interact with a magnetic field?

How do magnetic fields interact?

M
Plasma in a Magnetic Field

S
Impact of magnetic field on a dirty plasma.

R
Penetration of magnetic field into a plasma?

Plasma in magnetic field in equilibrium

S
How do I contain a magnet's magnetic field?