TL;DR Summary
I have a system that seems to suggest that it may possible to transfer information at much greater speeds than light. This seems completely ridiculous and I am definitely missing an important factor in my speculations/calculations. I need help understanding this phenomenon and where am I going wrong in this thought experiment.

Let us consider a hypothetical scenario, where we are able to translate any mass at a constant speed of 10m/s w.r.t to a given frame of reference. For simplicity, we are going to assume that the object is at rest initially.

Case 1 -
Now, consider 2 points A and B at a distance of 10m, and our goal is to transport some information from point A to point B in 1s. Now, this is a trivial case, in this case, we can simply send a point mass M at the constant speed of 10m/s and achieve the goal.

Now, similarly carrying on for extremely large distances (please refer to the image), this framework seems to suggest that any arbitrary distance can be covered in just 1s without any cosmic limits affecting it. Of course, the setting is hypothetical and practically it may never be possible to achieve such a mechanic.

This mechanics is causing a lot of confusion and I am unable to figure out what's wrong with my calculations. Of course, the scenario is completely hypothetical, but I believe imposing natural boundaries that we can never build such machinery shouldn't stop us from speculating a possible observation if it were to exist. This model suggests that the information the point mass is carrying is traveling faster than light which should not be possible. I am not really concerned with the relative speed of the innermost trailer wrt to an observer on A, but rather being mostly confused about the fact that how is such a large distance covered in just 1s. Case 1, 2, 3 are not so fictional and we can see this happening in real life as well. So how is it that just by increasing the number of outer trailers I am bounded by space and time to not exceed the speed of light wrt someone else?

PS: I am not sure if the question is a repeat of someone proposing a similar scenario, I am new to the forum and couldn't find anything similar to the scenario that I am looking for, and it was incredibly hard to find material on what's going on with the distances! 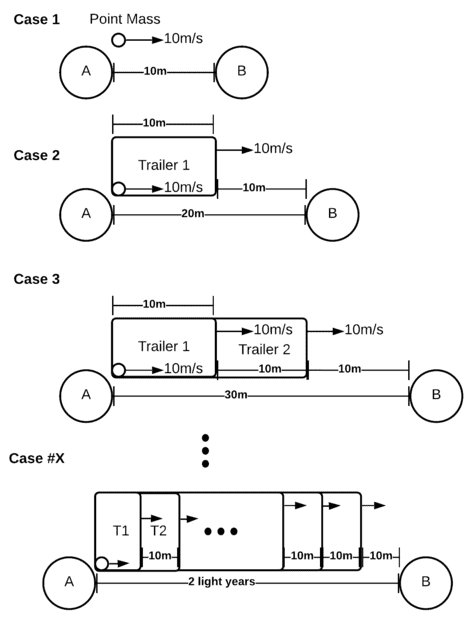 You’re using the Galileo velocity addition formula, which is only accurate for speeds much less than c.

Actually, I am aware of the relativistic velocity addition formula, however, what I am unable to understand is what happens to the distances. For an observer inside the innermost trailer, for him he should travel the 10m in 1s, and so should all the trailers, so an observer on each trailer should note only 1s as the commuting time. As I say it, I conclude is it so that the time for the innermost trailer is not the same as the outermost trailer?
PAllen
Science Advisor

kurosama said:
Actually, I am aware of the relativistic velocity addition formula, however, what I am unable to understand is what happens to the distances. For an observer inside the innermost trailer, for him he should travel the 10m in 1s, and so should all the trailers, so an observer on each trailer should note only 1s as the commuting time. As I say it, I conclude is it so that the time for the innermost trailer is not the same as the outermost trailer?

Ever heard of length contraction? time dilation? Also, please forget the nesting. It is a wholly unnecessary complication. One trailer and one mass are sufficient to understand all the issues, with high relative speeds.
PAllen
Science Advisor

One question you ask is how a large distance is covered in a short time. The key is that if the distance is per A and the time is per a mass moving at high speed with respect A, there is no limit to such a ratio. There is no problem having a clock traverse the distance from Earth to the Andromeda galaxy while elapsing only one second on the clock.
Last edited: Aug 31, 2021
Ibix
Science Advisor
Insights Author
2022 Award

kurosama said:
Actually, I am aware of the relativistic velocity addition formula, however, what I am unable to understand is what happens to the distances.

It's a bit messy because you need to account for time dilation, length contraction and the relativity of simultaneity. It's very simple to apply the Lorentz transforms and work out what's going on (at least if you follow @PAllen's recommendation and use one car inside another instead of a huge stack of nested cars, although I'd recommend using 0.8c as the velocity because at least some of the numbers are nice). But because the outer car's clocks aren't synchronised in the ground frame you can't simply add length contracted distances and expect them to add up to 1s times the velocity addition formula velocity.
Share:
Share

I Thought Experiment for General Relativity

B Does force travel faster than the speed of light?

B A twins paradox thought experiment

B Does this thought experiment show that Space must be curved?

B Thought Experiment : Try and get Alice to "0%" the Speed of light

I Metrics of general relativity