Watching a court case on TV. This is the set up: 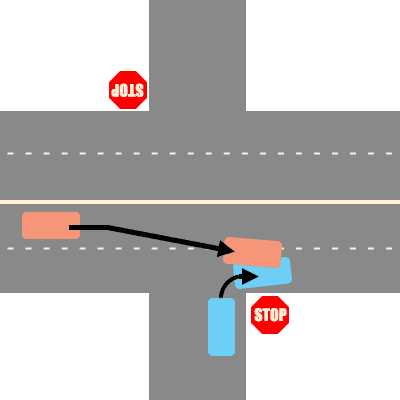 There is a collision. Who is at-fault? (Or who is more at fault?)

I have always understood that it is illegal to change lanes in an intersection (though it appears to be in contention as to whether that is a law).
I am not sure if a cross road with a 2-way stop constitutes an intersection.
If this does count as an intersection, then blue car may have been within his rights to pull into a lane that was ostensibly clear of oncoming traffic.

What do you think? And is the law specific to your state/region?

DaveC426913 said:
I have always understood that it is illegal to change lanes in an intersection

It's legal to do that in California, provided you do it right. i.e. the intersection is irrelevant.
Astronuc
Staff Emeritus
Science Advisor

DaveC426913 said:
If this does count as an intersection, then blue car may have been within his rights to pull into a lane that was ostensibly clear of oncoming traffic.

What do you think? And is the law specific to your state/region?

Technically, the blue car must wait for oncoming traffic to pass, even though a driver should not change lanes while crossing the intersection.

When I was in grad school, my wife was involved in a similar accident, but she was doing a left turn instead of right. She saw a truck in the far lane of a two lane, and she decided to turn left. However, the truck changed lanes without signalling and the trailer being towed hit the right corner of my wife's car taking off the front fender. My wife was entering a four lane highway with a median for left turns. She claims she had completed the turn, or at least had entered the lane before the other driver changed lanes. When I checked under the car, I found yellow paint from the median barrier. I then checked the scene, where she was forced over the median about a car length from the intersection. So, the evidence suggested she was already occupying the lane when the other driver changed lanes and struck her car.

Nevertheless, she was cited for being at fault and for not yielding to cross-traffic. The officer didn't bother checking the evidence supporting her claim that she had successfully occupied the lane and the other driver did an illegal lane change. I found out after the fact, when I arrived back at our apartment, and my wife was sitting in a tow truck, and her car was backed into the parking space, and the front bumper was in the back seat protruding through an open window. I told her she should have called my office, since I was only a couple of miles away from where the accident happened. However, she was too shaken up to think to call me, and she was upset that she was cited for being at fault.
berkeman
Mentor

What was the verdict in that court case? What state was it in?
DaveC426913
Gold Member

berkeman said:
What was the verdict in that court case? What state was it in?

It was on Judge Judy*.

She declared that Ms. Redcar, on the main road, had right-of-way, and Mr. Bluecar did not yield to traffic.

Mr. Bluecar tried to argue that Ms. Redcar changed lanes in an intersection and JJ shut him down before he could finish his sentence.

News Nobel on the way?

"New" theory of human movement as described by Tesla. Right?

Difference between trademark and design right?

Should I submit an outlandish physics idea that feels right?

Video games have become a joke (way too easy to finish)

One who knows enough to think he is right, but not enought to.... ;)

The right of way in a certain situation
2