It's another block/incline question - plus friction and a force

It's another block/incline question -- plus friction and a force

This shouldn't be difficult. I've tinkered for a few hours, and I know I'm just missing some ticky thing about getting it setup right. I'm going to post the /whole/ question here, but really if somebody can just help me get started, I should be able to solve it.

In fact, I've already made an incorrect attempt...so the computer has given me new numbers. I'm truly more interested in learning the concept than getting the right answer...

I know n should be mgcos(theta)
I know F=ma
and that the resistant force from the friction (And we'll use the kinetic friction, I believe) is friction*normal

Where I'm getting super lost is this:
If the surface was frictionless, I could easily determine the force from the acceleration. Because friction is involved I need "N" -- but I can't figure out how to find "N" without "F" -- so lost as to how to find "F" from "a" without "N" to help me know what the friction-force is.

Correct typoIf you don't know something give it a name and do some algebra. If you do things right, it will work out in the end.

Let N = the normal force and F = the horizontal force.

Can you do the following? (Never mind that you don't have a value for F or for N)

1. Find an expression for the sum of all the force components in a direction perpendicular to the plane.

2. Solve the above expression for N in terms of the other quantities.

3. Find an expression for the sum of all the force components in a direction parallel to the plane.

4. Set the sum of the "parallel to the plane" force components equal to mass times acceleration.

I'm getting 2 equations and 2 unknowns. That's fine -- but solving for the unknown values does not give me even close to the right answers.

Ok, thanks for the help. I'm going to work on it right now -- but if that's wrong than my trig is screwy. Can we take a side trip and figure out what misconception I'm running on? Here's the way I'm visualizing it: 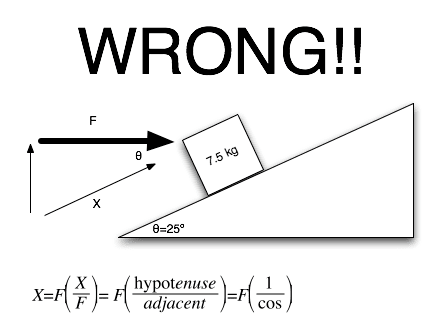 It seems (to me) like Fcos25 would give me F^2/X (Where X is the component of F pointing up the incline) -- where I'm trying to have F cancel out in the trig and leave me with X.

Ok -- I had an aha moment, and realized that F is the hypotenuse, not one of the sides.

Right. The magnitude of the vector is the hypotenuse here.
Last edited: Jan 26, 2010
mcleanrs 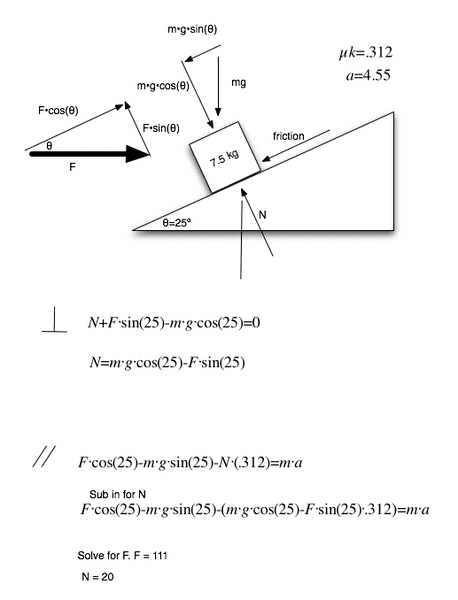 I know it's wrong because I'm given a range for N between 100 and 120, and I'm only getting 19. Again...not the foggiest idea what's wrong.
mcleanrs

It's the direction of my F*sin (θ) arrow. That's increasing N, not decreasing. Going in for round 20.
kuruman
Science Advisor
Homework Helper
Insights Author
Gold Member

mcleanrs said:
It's the direction of my F*sin (θ) arrow. That's increasing N, not decreasing. Going in for round 20.

That's the only problem that I can see with your diagram. You should be able to get it now.
mcleanrs

Got it that time -- thank you very much. Never again will I be phased by such a problem!
Log in or register to reply now!

Block on an incline and frictional force

Another friction and inclined plane question.

Block over another block, with friction force

Block sliding down an incline then collides with another block question.

Friction and moving blocks on inclines

A block on incline and forces acting upon it

Friction and Tension with blocks on an incline

Friction pinning a block on another block

Block on an incline with Friction