Length of the box based on the fringe pattern? I think I'm close. 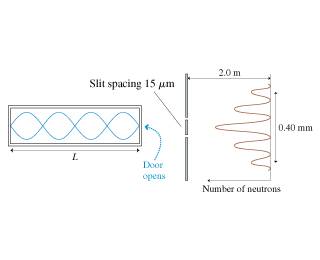 shows a neutron in a one-dimensional box. If the right end of the box is opened, the neutron travels out of the box, impinges on a double slit, and is detected 2.0 m behind the double slit. Repeating the experiment over and over produces the fringe pattern shown in the figure.

What is the length (in nm) of the box?

Variables in equations explained in "The attempt at a solution"

I thought I could use the fact that the fringe position is y(m)=(m*lamda*L)/(d) where lamda is the wavelength, m is the number of fringes which should be two (m=2) since the central max. is m=0. Then L is the length behind the double slit. d is the fringe spacing. I then plugged that into the formula for the wavelength of a open-closed tube which is lamada(m)=(4*L)/(m) where m in this case is m=4 since there are 4 modes in the wave. The two fours cancel out giving lamda=L so, L=0.0165nm but that is not right. So, I tried using the fact that the fringe spacing (instead of fringe position) was (delta)y=(lamda*L)/(d) and I got an answer for L=0.033nm. I know I am close... I'm not the best at physics so can someone spot where I am going wrong?

1. I wouldn't use L in the diffraction fringe equation, since it could get confused with the length of the box L.

2. What numbers are you using for Δy and d in the diffraction fringe equation? And what do you get for λ as a result?

Please check that equation. I'm pretty sure the "4" should be a "2".
Log in or register to reply now!

Related Threads on Length of the box based on the fringe pattern? I think I'm close.

Fringe with of interference pattern

Fringe spacing of the Interference pattern due to two Coherent waves

Fringe pattern of a vapour lamp

Electron in a box. Finding the length of the box. (infinite well)

Find the tension T of the two blocks. I think I'm doing something wrong

I'm lost on this one, i think its a torque question.

Finding the speed of a bowling ball based on the length of the lane and sound.