Maximizing rocket velocity - shoot fuel at once, or slowly?

I stumbled upon a 3-year old article from Wired that poses this question on rockets:

Suppose I have two rockets with a mass M and fuel mass m. Rocket A shoots all the fuel at once (again, like a nuclear propulsion engine) with a fuel speed of u and rocket B shoots two blobs of fuel—first a shot of m/2 and another one of m/2. Both start from rest. Which rocket has the higher final velocity? 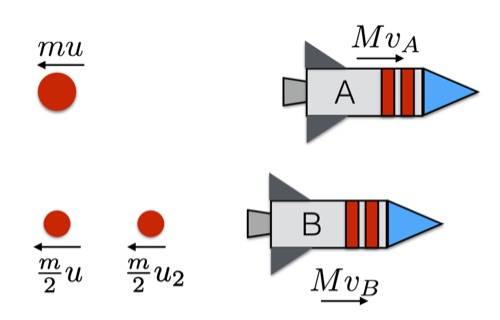 The author claims that rocket A will have the higher velocity, but if I actually write out all the momenta, it seems to me that rocket B should be faster. I believe the author's error is that the velocity of the fuel shot from rocket A should be [itex]v_A - u[/itex] not [itex]u[/itex], since [itex]u[/itex] is the fuel speed relative to the rocket. Am I correct in thinking that the author is mistaken, or am I missing something?

Calculate the total momentum of the left-moving mass. By momentum conservation, that will be the final momentum of the right-moving rocket. Which is greater? It will be more clear what is going on if you imagine the first case as the simultaneous expulsion of ##m_1## and ##m_2##; both end up moving to the left at speed ##u## in the first case. But in the second case, how does the speed of ##m_2## compare with the speed of ##m_1##?

At a more handwaving level.... in the second case, some of the momentum gained from expelling the first mass is "wasted" accelerating the second mass to the right.
gumby

The first page of these lecture notes explain my point: https://ocw.mit.edu/courses/aeronau...fall-2009/lecture-notes/MIT16_07F09_Lec14.pdf
Nugatory
Mentor

gumby said:
Hold on. The fuel speed is u relative to the rocket.

Yes, but it is relative to the speed of the rocket at the instant before the fuel is ejected, not the instant after.

Otherwise ##u## wouldn't be a constant, it would depend on the mass of the rocket plus the remaining fuel onboard.
gumby

Suppose there is some amount of energy [itex]E[/itex] stored in the rocket that will be completely converted into kinetic energy after ignition. Then we have [itex]E = \frac{1}{2} mv_{fuel}^2 + \frac{1}{2} Mv_{rocket}^2[/itex] (velocities relative to a stationary observer). If the rocket is massive enough such that the rocket's final velocity is essentially 0, then we will in fact have [itex]v_{fuel}=-u[/itex]. However if the rocket is light enough such that the rocket achieves non-negligible velocity, then the speed of the fuel will be less than [itex]u[/itex], so [itex]u[/itex] cannot be the speed relative to the initial rocket speed.

Finds over 200 000 hits. That program goes back over 40 years. If I recall correctly, the error checking in the DEC minicomputer version was incomplete. If you were low on fuel you could enter a short time, high, negative acceleration and "gain" fuel in your tanks. You could then proceed with the usual slower acceleration to a successful landing. That may have been a quirk in the program, but it seems to support that your B rocket would be faster. Then again, our current space program uses the A approach. Oh well. It was a fun game at the time.

That is a reasonable simplifying assumption. It amounts to assuming that the kinetic energy provided by the cartridge is identical in either case.

If one makes this assumption then it is clear that firing two notional bullets using one notional double-charge of powder is more efficient than firing two notional bullets in sequence one after the other. In either case, one has two bullets flying away and carrying momentum determined by their combined mass and the motion of their combined center of mass. But in the one case those two bullets are also carrying excess kinetic energy due to their relative motion. This leaves a tiny bit less kinetic energy available for the recoil of the gun.
Last edited: May 29, 2018
Filip Larsen
Gold Member

However, if the rocket is in a gravity field then the Oberth effect [2] comes into play. Here most of the delta-V from an impulsive burn will go into changing the rockets orbital energy if the maneuver is performed at periapsis. In this case your situation A will give more orbital energy than B if the second burn in B is done away from periapsis.

Related Threads on Maximizing rocket velocity - shoot fuel at once, or slowly?

Maximizing Momentum for a Rocket

Conservation of energy in a rocket

L
Thrust in a Water rocket (or any rocket?)

B
Escape velocity for rocket launches
2

Momentum of a rocket with pressurized gas