In another amazing photograph, the Mars Reconnaisance Oribiter (MRO) successfully utilized its fantastic HiRISE camera to take a picture of the Curiosity rover DURING PARACHUTE DESCENT.

The amount of perfect synchronization between teams during this landing is just staggering- Curisoity's descent telemetry signal was relayed through the Odysesy orbiter, and photographed MID FLIGHT by the MRO HiRISE camera.


Planetary.org said:
In 2008, Mars Reconnaissance Orbiter snapped an amazing photo of Phoenix descending to the surface of Mars under its parachute. Now it's repeated the feat, with Curiosity. I think this image pretty much speaks for itself. Absolutely stunning.

I want you to sit back and think about what was going on when this was taken. Both spacecraft were operating totally autonomously, based upon commands uplinked to them a long time before. (Some timing parameters were updated hours before.) This is a spaceship at Mars, and we have a photo of it in action, just minutes before its historic landing. Incredible.

I for one can't wait to see the images taken by the rover during final descent after the heat shield was jetissoned!
Mech_Engineer
Science Advisor
Gold Member

NASA released a low-res low framerate version of the "landing video" yesterday. It's a pretty amazing watch, especially the end with dust blowing and the wheel touching down. The video shows the last 2.5 minutes of the descent, starting with the heat shield falling away. Pretty fantasctic stuff, looking forward to the full-res video in a couple of weeks too.

Note the video is actually running at about 2.5x speed, due to the limited number of frames currently downloaded. The "real" video at 20 fps will be really nice...

Also a nice picture of the science "goal" mount sharp: 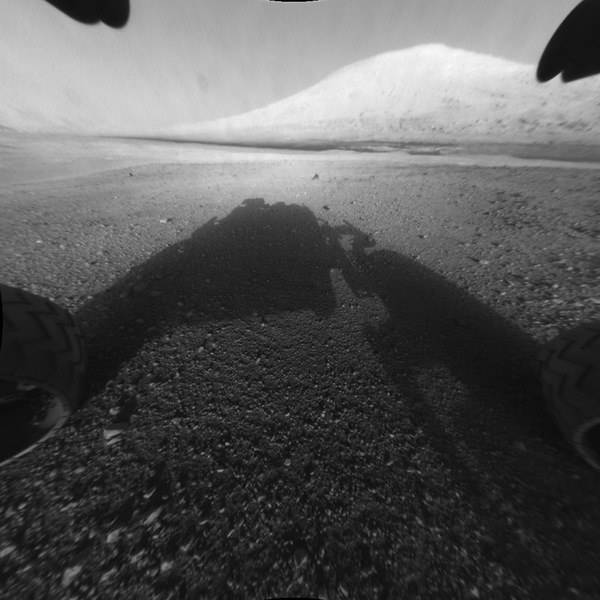 HiRISE also photographed the heat shield as it was falling.

Apollo landings to be photographed

O
News What are your thoughts on how we can successfully win in Iraq?

T
What would you do if you were famous and was photographed when picking your nose?

K
Photographs of a UFO
2

Just out of curiosity.