Hello everyone.
I have a question about the fact that there is no drag in the thin airfoil theory. I have read that it comes from inviscid and incompressible flow (potential flow) but what i can not understand is why there would be no drag from pressure differences ?
The skin drag is of course 0 since the flow is inviscid, but if i imagine the flow around a angled thin airfoil, I would think that the projection of the pressure on the flow direction (let's say x) would create a drag force !

Also, I do not understand why adding viscosity/Boundary layer would all of sudden allow the pressure drag to exist ?

On an angled flat plate (AoA different than 0) in potential flow, the leading edge is a singularity point. This basically means that the velocity goes to infinity there, so you have infinity suction on an infinitely small area.

You can see the flat plate as a classic airfoil with a limit of thickness going to zero. As you approach zero thickness, the leading edge radius becomes smaller and smaller, and the suction there becomes bigger and bigger. In potential flow, the total drag remains zero until you reach the singularity.

@boneh3ad Please take a look at this thread and give your comments, particularly with regard to post #2.
boneh3ad
Science Advisor
Insights Author
Gold Member

Are you familiar with D'Alembert's paradox, @PHstud? Thin airfoil theory assumes an inviscid flow, so D'Alembert's paradox applies. You might take a look at the concept of conformal mapping and the Joukowsky transform to illustrate how an airfoil behaves, in many ways, similar to flow around a circle. Perhaps that is more intuitive to think about as a zero-drag shape than an airfoil? Ultimately, though, the drag on a subsonic airfoil comes from two primary sources: viscosity and finite-span wings, both of which are neglected by thin airfoil theory. You need the account for a finite span and viscous drag to get the total drag on a wing.

Regarding singularities, the velocity does go to infinity at a singularity such as a source/sink or point vortex in potential flow, but I fail to see how that intuitively has anything to do with the OP's question. In a potential flow, the drag is zero period. This is D'Alembert's paradox, and the reason why there was a schism between the fields of hydraulics and fluid mechanics for over a century. Theoreticians predicted zero drag, while engineers observed clearly finite drag, so they just stopped talking to one another almost until Prandtl described the boundary layer in the early 20th century.

This is... wrong. I mean, sure, adding a boundary layer means there is a nonzero displacement thickness, so you have to account for some finite thickness to get a "correct" answer. Simply adding some thickness wouldn't change the answer according to thin airfoil theory, though, which assumes an infinitely thin airfoil regardless.

More importantly, though, pressure has precisely nothing to do with skin friction drag. The pressure gradient through a boundary layer normal to the surface (or an airfoil or anything) is zero, so the pressure at the edge of the boundary layer is identical to that at the surface. Further, the pressure force always acts normal to a surface, so it cannot create any component that is locally tangent to said surface like skin friction does. Skin friction drag arises purely due to the fact that viscosity requires the no-slip condition, so there is a nonzero velocity gradient at the wall, which means there is a shear stress. Thin airfoil theory cannot predict this. Iniviscid panel methods cannot predict this. No theory based on potential flow can predict this. You must incorporate boundary-layer theory to model it.
Murmur79

boneh3ad said:
Regarding singularities, the velocity does go to infinity at a singularity such as a source/sink or point vortex in potential flow, but I fail to see how that intuitively has anything to do with the OP's question. In a potential flow, the drag is zero period.

So, suppose the following. Imagine an infinitely thin, 2D flat plate of finite chord, at a positive angle of attack. In potential flow, and adding the Kutta condition on the trailing edge, the result is positive lift and zero drag.

How can you explain this paradox of a paradox, without resorting to singularities?
Murmur79

I also realized that the second answer to the OP in my first post was a mess, well I deserve it remains online as my personal wall of shame.

So I re-read the second question of the OP and now I think I understand what he was asking.

The answer should be that the presence of the boundary layer, in addition to creating friction forces over the surface, also changes the pressure distribution around the airfoil, and integrating the pressure over surface, there is now a resulting component in the horizontal direction that is the pressure drag.
PHstud

Thank you for all your answers.

I do understand that drag will come from viscosity and finite wing (if you are talking about induced drag, right ?).
I got an answer for half of my question, indeed, it is easy to see why a sphere does not have drag in a inviscid flow (because of the total symmetry of the flow).

My concern is : When we add viscosity, a term of drag that is called pressure drag, or form drag appears. Like this picture explains : 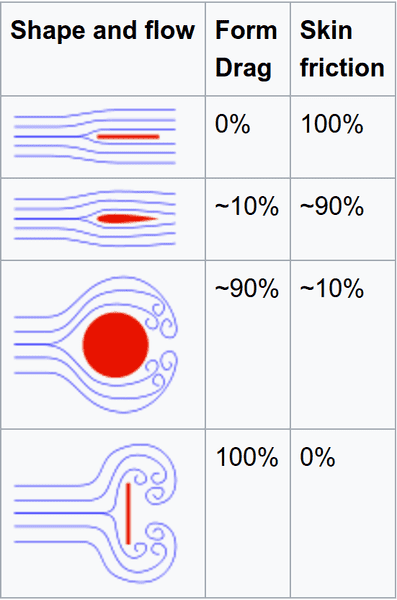 Is this form drag coming from the fact that, due to viscosity, we have a "stalling" of the flow, and thus the pressure is not symmetrical anymore ? Or is it due to something else I don't understand ?
Thanks

No, the separation of the boundary layer is not necessary for pressure drag to appear.

Consider an airfoil in inviscid flow at zero AoA. As you said, in this case there's no either friction, nor pressure drag.

When you add the effects of viscosity and the boundary layer, not only you now have friction drag, but the presence of the boundary layer also modifies the volume in which there is potential flow. This change is accompained by changes in the distribution of pressures outside of the B.L., and hence also on the airfoil surface, such that when you integrate the modified pressures on the surface of the airfoil, you now have a horizontal component that is the pressure drag.
PHstud

I hear what you say, but in that case, a flat plate perpendicular to the flow(100% pressure drag) doesn't really have a behaviour with a boundary layer like you describe it, does it?
Murmur79

In a flat plate perpendicular to the flow, the B.L. is of course separated. Every time there's a B.L. separation, you can be sure that there's pressure drag as well. A B.L. separation completely changes the pressure distribution around the body.
Share:
Share

Does induced drag theory include the Lift = Weight condition?

Pressure drag and the Reynolds number

Drag on a Supersonic Baseball (from SmarterEveryDay)

Clarifications about the aerodynamic centre of an airfoil