We tried to make some quantitative measurements with a Pasco ripple tank system, a video camera and software for video analysis. We generated circular waves and tracked the propagation of a crest, from which the software computed the phase velocity: 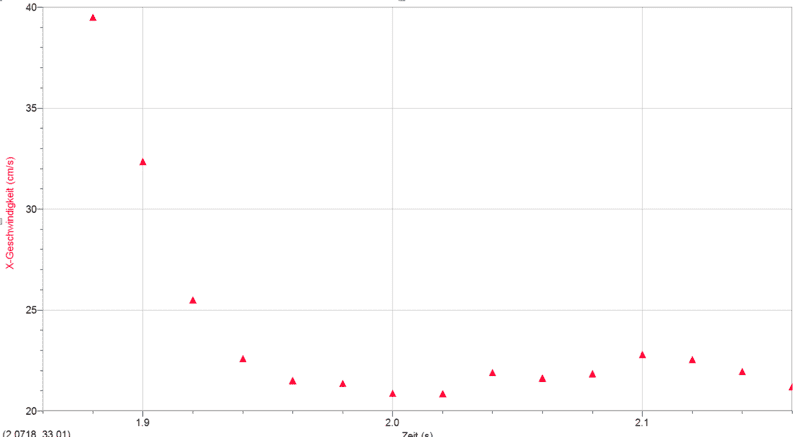 We used 5 Hz, 10 Hz and 20 Hz; unfortunately I'm not sure what the setting was for this particular measurement (they all look similar anyway).
The phase velocity seems to stabilize around a constant value (as the wave velocity should be according to linear wave theory) somewhere before 2.0 s, but why is it so much faster before that?
It seems that the ripple generator does more than just excite the waves by moving up and down, maybe it introduces a nonlinearity of some sort?

Or might this be a dispersive effect? Then again, why would there be dispersion if the frequency is constant?

…It seems that the ripple generator does more than just excite the waves by moving up and down, maybe it introduces a nonlinearity of some sort?

Following the link you provided, I did not find any videos of the ripple generator in action, but from the photos it would seem that it works by moving horizontally, not vertically. Is that the case? If so, you may be seeing the waves start off at the whatever speed the generator is moving.
tech99
Gold Member

Can you please tell me the name of the X axis.
I presume the ripple tank uses a vertical "dibber" to make the waves.
tech99
Gold Member

For a radiated wave, I expect to see energy being carried away from the source.
If the phase velocity is high at the start, I read this that a blob of water initially tends to go up and down with the dibber, rather than forming a radiated wave.
The dibber drags a mass of water up and down with it. Only a part of this energy is radiated. Most of the energy is stored in the vibrating system, the voice coil etc, which now includes the mass of a blob of water.
A similar effect occurs with a radio transmitting antenna, where very close to it we see a lot of stored energy. The up and down displacement of your water
resembles the electric field of the antenna. Very close to the antenna we see a strong electric field which appears to have an outward phase velocity greater than light. This strange effect was first noticed by Hertz when he first made radio waves.
The region very close to the source, where we have a lot of stored energy, is called the reactive near field.
Do not confuse this reactive near field with another region in the ripple tank. Very close to a directional wave source, such as a vibrating bar, the waves travel away in a parallel beam. But eventually they spread out. These two zones are sometimes called the near and far radiation zones.
Log in or register to reply now!

I Do non-monochromatic "waves" exist in dispersive media?

Speed of Ripples in a Pond

What is ripple factor in halfwave rectifier?

I Dispersion: expansion of wavenumber as function of omega