Radiant intensity of a Lambertian surface 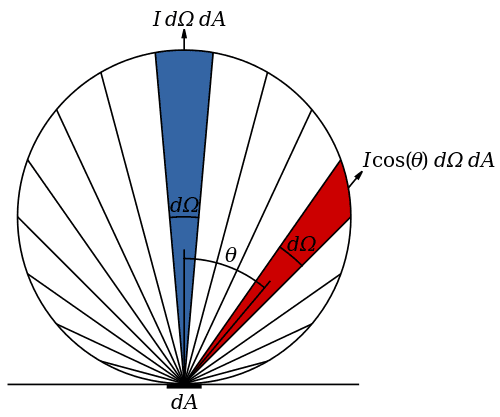 which, the way I see it, would mean that the radiant intensity is maximum in the direction normal to the emitting surface, and approach zero as the direction becomes parallel to the surface.

What am I not getting there?

Perhaps you are not accounting for the cos(q) term- dA*cos(q) is the apparent area of dA, as determined by the angle between the surface normal and the propagation direction.

Here's how I describe a Lambertian emitter (which is not an isotropic emitter) such as a piece of paper or the surface of the moon: each area element dA appears as dA*cos(q). Since the radiant intensity of the Lambertian surface is given by I cos(q)dAdW , the irradiance I/dA = I cos(q) dAdW/dA*cos(q) = I dW and is independent of the orientation of the surface with respect to propagation direction: the lunar surface appears flat, not curved.

Related Threads on Radiant intensity of a Lambertian surface

Radiance of a Lambertian emitter

L
Relationship Between( Intensity Level and Intensity of Object)

Intensity of a Gaussiam Beam