Resistance of a non-ohmic device from its I/V graph

Thread moved from the technical forums, so no Homework Template is shown
What is the resistance of Device Q when a current of 200mA flows through it?

Wouldn't the resistance of the device be approaching 0 Ω as its characteristic resembles one of a diode (gradient = 1/R)?

Apparently, the answer is just using V = I R, and solving for the resistance.

Is there something I am missing? Thanks. 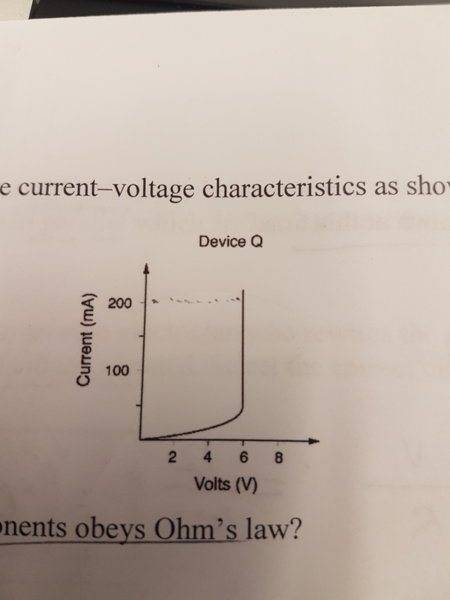 Use the derivative definition of the resistance, and look at what that tangent line is at the current they are asking about...

Thank you for the help. I think the answering scheme was dodgy, the resistance should be very small.
sophiecentaur
Science Advisor
Gold Member

Appo said:
Apparently, the answer is just using V = I R, and solving for the resistance.

Using that calculation you get a low answer for 'resistance' (lower than if you do the same calculation for the lower part of the curve. The dV/dI formula gives you a much lower value. But I have a real issue with giving great significance to these calculated values of 'R'. They are not constant and can't be used in any of the circuit calculations that you can happily use with linear resistances. i.e. you can only use them if you already know the value of, say, Current through them. You could only do that if all the other resistances in the circuit were so high (compared with your R) that the diode performance is 'swamped' by the other components. This would assume a 'Constant Current' source into the diode.
To use this Pseudo R, you would need to know the variation of R with I, which is no more use than knowing the variation of V with I. Sometimes there may be a linear portion to the curve but even then, you need to include an extra Voltage across the diode if you want to use its 'Dynamic Resistance' - so nothing is straightforward.
CWatters
Science Advisor
Homework Helper
Gold Member

There are two ways to calculate the resistance at point X. You must find out which your exam board or sylabus expects...

In the UK, the exam board my children had wanted method 2. It appears yours does as well.

Method 2 gives the value of a resistor that could be used to replace the device leaving the voltage and current unchanged. This is also called the static resistance.

Method 1 would give a value for the small signal resistance. This allows you to calculate the voltage and current changes that would occur if there was a small signal (change) applied to the DC operating point X. This is also called the dynamic resistance.

CWatters said:
Method 1 would give a value for the small signal resistance. This allows you to calculate the voltage and current changes that would occur if there was a small signal (change) applied to the DC operating point X. This is also called the dynamic resistance.

That is the only way that a non ohmic device can be usefully be described in terms of a Resistance but, even then, the dynamic resistance cannot be assumed to stay the same once the external conditions change so you need to take great care when trying to use just a single value of Resistance and check that it's valid for each example.
CWatters
Science Advisor
Homework Helper
Gold Member

Im afraid I dissagree. So suppose you wanted to replace a light bulb with a resistor that dissipated the same power. Which method of the two I described would you use?
sophiecentaur
Science Advisor
Gold Member

CWatters said:
Im afraid I dissagree. So suppose you wanted to replace a light bulb with a resistor that dissipated the same power. Which method of the two I described would you use?

In that case, when the supply volts are the same (near enough) all the time, V/I would be appropriate but still not a lot of use if you were to use the bulb in another application. For instance, in the days before solid state lighting dimmers, it was common practice to use two bulbs, connected in series, parallel and one bulb, to get three brightness settings. When in series, the bulbs would be getting half supply volts so what 'resistance' value could you use if you wanted to calculate the dissipated power. You would need to include the R variation with temperature information. Electric cooker hot plates used the same arrangement but then the resistance did not change significantly with temperature so you could guarantee Full, Half and Quarter power settings would actually work but only because no one made any non-Ohm approximations.
Otoh , working out the AC gain of a feedback circuit could involve the dV/dI formula and that would be 'ok' but each set up would need a different Requivalent.
In either case 'handle with care' and avoid trying to teach at an elementary level because there is no easy solution to any circuit problems involving non linear components.
CWatters
Science Advisor
Homework Helper
Gold Member

My position is that they are both equally important.

I would urge the OP understand both and to speak to his teacher or supervisor to find out which they should give as their answer if the question is not clear. It may well depend on which exam board they use.

My twins approached me with this very question a few months before their gcse physics exam and I initially told them it was the slope of the tangent line that they should give. That turned out to be wrong for their exam board.
sophiecentaur
Science Advisor
Gold Member

CWatters said:
My twins approached me with this very question a few months before their gcse physics exam and I initially told them it was the slope of the tangent line that they should give. That turned out to be wrong for their exam board.

This is yet another example of the way that school syllabi are thrown together with no thought for context the confusion that can be generated. There is plenty of stuff that would be useful for GSCE students to be taught but there is not time because the programmes of study are clogged up this sort of thing. There is no need to bring calculus into the Electrical syllabus at this level. When would a GCSE student be dealing with an AC circuit with a non linear element, except for mains electric lamps? I showed some students how the 'effective resistance' of a light bulb varies with supply frequency and I realised that it was just outside their comfort zone. OK on a qualitative level but just keep it at that.
My theory is that the committees who put the syllabi together are composed of people who actually don't know much real Science and people who know a lot of Science but have no empathy with young people's inexperience. Like car salesmen, they are over optimistic but won't accept responsibility when their optimism ends up with a disappointed customer.
Incidentally, I looked at the 2016 AQA GCSE Physics Spec and could find no mention of anything but the VI curve of a filament bulb and a comment about the measured resistance with no discussion of the implications. I am not aware of the slope being mentioned in any of the specs that I have worked to.
Share:
Share

L
Give an example of an ohmic and non-ohmic device

C
Finding resistance and its change from a V-I graph

C
Resistance from I vs. V graph problem

A
Resistance from a V-time graph

J
How to determine the change of resistance from I-V graph?

Finding the smallest resistance on a I-V graph