These questions are just to clarify some conceptual issues I am having.

When finding the vertical force component exerted on a curved surface, we have used two major methods:


I) When am I allowed to use Buoyant force, and when can in not be used?


Here is an example: 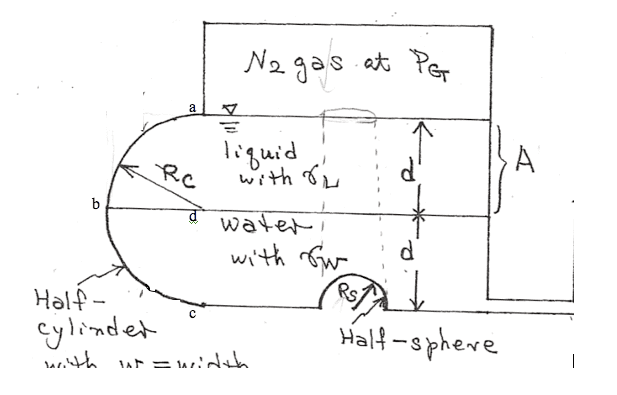 If I want to find the vertical force acting on the half-cylinder abc =FV,Cyl

I can use buoyant force or the weight of the liquid above.

However, to find the vertical force acting on the half-sphere, I cannot use buoyant force.

Why not? Is it because there is a vertical pressure difference between the inside and outside of the sphere? (i.e., the inside has Pgas acting down whereas the outside has Patm acting up)

Is there a general rule that allows you to apply buoyancy that I can check for?

Maybe it's better to understand why you can use the missing liquid method.

Conceptually if you had an imaginary sheet that was curved to fit the same boundary, and you submerged it at the same depth, then you can imagine if the pressure differential is identical to 0 at all points along the surface of each side that there is no net force on the sheet. If those forces cancel out completely, then that would seem to suggest that the force on the inside is pushing with the same weight as the water above the boundary.

Note that no water was displaced in the explanation of this concept.
Saladsamurai

I would be lying if I said that I followed you LP. I am not sure what you mean by pressure differential. And why is it zero?


Also, you can always use the missing liquid method from what I gather. But in a lot of cases, buoyancy should be easier I believe.
LowlyPion
Homework Helper

Saladsamurai said:
I would be lying if I said that I followed you LP. I am not sure what you mean by pressure differential. And why is it zero?

Also, you can always use the missing liquid method from what I gather. But in a lot of cases, buoyancy should be easier I believe.

In figuring the force on the wall of a tank, as you were in one of your problems the other day, the weight of the water above works well. For if I curved a thin membrane, and I submerged it at the same physical points in space beneath the surface of the water as though the wall of some imaginary tank, and I wanted to figure the upward force on that surface, then, noting that since it is submerged at the same depth at all points beneath the surface, then necessarily there is no pressure gradient across the sheet at any point. Since there is no net force, then I can model the upward force on the irregular surface as merely the weight of the vertical column of liquid (the downward force which must be equal) to the surface over that irregular area.

With buoyancy you are displacing water with something of a different density. If the density is ≡ to water then there is no net force on the submerged object. If the density is greater then it sinks with a negative buoyant force, and less than water it floats with the buoyant force. In both cases the magnitude is determined of course by the difference in densities times gravity.
Saladsamurai

Ok. First, I presume that you are talking about the half-cylinder abc and not the half sphere right?

I am not sure why I don't see what you are saying. I don't see how the half-cylinder is different from the half-sphere.

My professor dod the same thing with the half-cylinder abc that I think you are saying: He took it and shifted it to the right so that it lies completely inside the fluid.

But I don't see why you can do that?

I don't see why you keep saying that

If you look at abc as it is, right now, then there is definitely a pressure difference between the outside and inside if the wall and it varies with depth. So how is there no pressure gradient?

Sorry, I just don't see it

(Maybe I just turned senile? I think you just physically witnessed the the transition from normal though processing into senility. Annoying huh? )
Last edited: May 18, 2009
Saladsamurai

Anyone else want to add on? My text does not give any kind of description as to when it is appropriate to use buoyancy instead of wt of liq above method.

I guess for now, I just won't use buoyancy since the wt of liq method will always do the job.
LowlyPion
Homework Helper

Saladsamurai said:
If you look at abc as it is, right now, then there is definitely a pressure difference between the outside and inside if the wall and it varies with depth. So how is there no pressure gradient?

Of course there is a pressure across the surface - from the inside to the outside - when that surface is actually the outside of the container.

But use your imagination for a moment. Suppose that surface (both sides) was beneath the water - no longer the outside of the container with air on the other side. We will assume that it is in equilibrium beneath the water. Then isn't it true that there is necessarily no net pressure (one side to the other), leaving aside any consideration that pressure may vary by vertical height (i.e. along the surface, since it will vary equally on both sides)?

Okay. Now how does this concept translate to the half-sphere?

Why can't I "pretend" that it is completely submerged?

Thanks for your help LP! I feel like any moment now it is all going to click
LowlyPion
Homework Helper

Saladsamurai said:
Okay. Now how does this concept translate to the half-sphere?

Why can't I "pretend" that it is completely submerged?

Thanks for your help LP! I feel like any moment now it is all going to click

Looking at your problem, now, and please realize I was speaking more generally before as I was addressing your more general question about when to use the weight above, I see that there are some twists that I wasn't addressing at all.

Edit: by previous problem I was referring to the "missing water" method.
Last edited: May 18, 2009
Saladsamurai

My general question was actually when to use Buoyancy. The weight of liquid above method can always be used. No big deal though; six in one, half-dozen in the other


The hemi-cylinder is a little different because there is air underneath isn't it?

This is where I was confused. Apparently you can use Buoyancy for the half-cylinder.

But this is not the case with the half-sphere For this, you must use the weight of the liquid above method.

My professor (whose English leaves something to be desired) said it has something to do with the fact that the half-cylinder satisfies the hydrostatic condition whereas the half-sphere does not.
Share:
Share

Suggested for: Some Hydrostatics ConceptsWhen to use Buoyancy/When to use

Use the energy method to find the distance moved by particle

When it states "in terms of a, b, c" do you need to use all variables?

How to use Weibull distribution when it comes to wind?

How to choose the correct function to use for a Taylor expansion?

How to use Kirchhoff's voltage law on this circuit?

Can someone tell me which formula to use here? (time to boil water)

When to use the Lumped Capacitance method in Heat Transfer problems?