As already posted on PF, and you have likely seen in the news, a SpaceX rocket exploded, September 1, 2016. Elon Musk is reaching out for help in finding out how it happened. http://www.csmonitor.com/Science/20...calls-on-public-government-in-explosion-probe

I took the video and placed it in this, to allow frame-by-frame examination:
http://rowvid.com/?v=_BgJEXQkjNQ
Just in case... you can set the speed, for example, at .25 by clicking that button. Use the < and > buttons to move one frame at a time.

I already have my idea of what might have happened, and sent it along to reports@spaceX.com, but I want to let everyone else look for themselves to see if they can deduce anything. Some of the smart people at PF might be able to see something that the SpaceX people have not noticed.

Did Musk also release detailed drawings of the Falcon 9 and minutes of the test? With just a video there's no way to come to any realistic conclusion that isn't pure conjecture.
liometopum

Musk is asking if anyone else has photos or videos, so conjecture away! They have all the technical info, and they are stuck and need help. The people here might make a difference for them, by seeing things differently.

Try it, for real. What can you deduce from the video? What do you see?
jim hardy
Science Advisor
Gold Member
2019 Award
Dearly Missed

I dont know how to single frame Youtube, arrows only give me 1/4 second increments.
here's best i can get

This is the 'raw' site: You can't use YouTube to advance by frame. Use this link: http://rowvid.com/?v=_BgJEXQkjNQ
(You can use that site for other videos too. )
Or http://anilyzer.com/

With that said, you got the first frame of the explosion, or what I get, at least. But using rowvid.com is easy.

Where'd it start ? well it's hard to say
My best guess follows.


i find anilizer just typical recalcitrant software, a bundle of excuses to not do anything.

well! What a pleasant surprise rowvid WORKS GREAT ! Sure beats trial and error on Youtube. 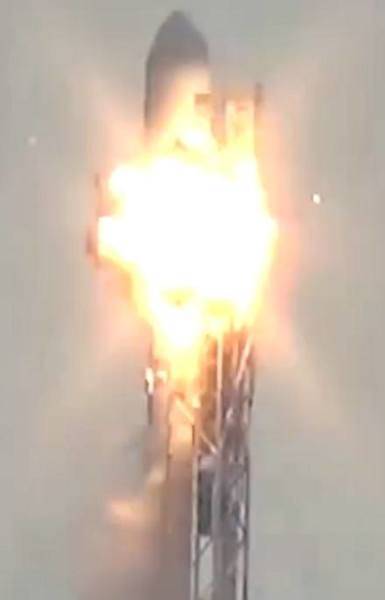 Seems to me a kerosene leak would have run down and set the whole rocket afire, slowly like charcoal lighter. Clearly this was a kerosene & LOX mix burning, 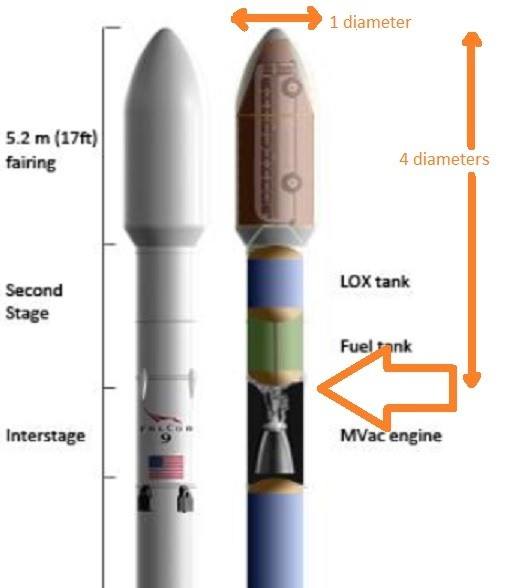 Whole 2nd stage got engulfed in a fireball and blew apart.
Would've taken failure of both tanks to let fuel and LOX mix
so
My guess is 2nd stage engine somehow got a start signal .
See my signature ..............

https://en.wikipedia.org/wiki/Falcon_9
Both stages use a pyrophoric mixture of triethylaluminum-triethylborane (TEA-TEB) as an engine ignitor.[51]
[see msds's linked below - old jim]

SpaceX uses multiple redundant flight computers in a fault-tolerant design. Each Merlin rocket engine is controlled by three voting computers, each of which has two physical processors that constantly check each other. The software runs on Linux and is written in C++.[52] For flexibility, commercial off-the-shelf parts and system-wide radiation-tolerant design are used instead of rad-hardened parts.

Just looking at the basic images may be of limited use .

More effective would be to find ways of processing the primary images to give a series of new images each covering a restricted range of light wavelengths .

Breaking down into primary colour images is certainly possible and that would be useful but ideally ways might be found of getting some IR images as well - even poor quality ones would be very useful indeed .
Greg Bernhardt
Admin
Insights Author

If a PF member could help that would be incredible! PF team assemble! :)
RonL
Gold Member

Using the four light rays in that first picture seems to show an X as in x marks the spot. pretty much where the steam or smoke was showing the frame before.
TheQuietOne

It looked like the fuel tank... I agree with Jim hardy
Filip Larsen
Gold Member

For what its worth, Scott Manley has posted a nice commented video analysis:

Doing frame by frame, this is what I see:

71.77: In 40 msec or less, the "explosion" is already 17 feet high and wide. This is excluding illuminated sections of the booster that, on first glance, might appear to be part of the fire. Presuming that we started with a point source of ignition, this means that the illumination border has been moving at 8.5 feet in no more than 40msec or >210 feet per second or more.

71.81: In the next 40msec, the flames have continued to expand laterally, but the bottom of the flame has actually shortened!! Moreover, a "cloud" created from cold temperatures along the bottom half of the booster is left undisturbed during this time - and for at least 10 frames that follow.

So at first, it would seem that what we are seeing in these first two frames is purely a flame propagation front. It would seem that an invisible and combustible mixture of gases was already there, hanging as a cloud in the air, when it became ignited.

But there's a problem. Flame propagation rates are measured in cm/sec, with our 210 feet per second being over 5300 cm/sec. Among the fastest propagation rates in air is a 38% mixture of hydrogen which tops out at roughly 480 cm/sec (http://www.comtherm.co.uk/CT-7a Fig.pdf). So, unsurprisingly, we are definitely working with something more potent than air.
Perhaps the chemists among us can come up with a mixture that will propagate at 6400 cm/sec. For comparison, the source above rates methane/air at about 70 cm/sec while this http://www.sciencedirect.com/science/article/pii/S0360544212005579 shows a oxy-methane mixture at about 295 cm/sec. Even assuming that hydrogen gets the same boost (haven't found a source on that), it would still fall short of our 6400 cm/sec. Besides, our gases should be on the cold side - slowing the burn rate down a bit.
So did something, perhaps turbulence or heat, enhanced the flame speed? Or perhaps the flame spread without incandescing for a few frames before becoming visible?

The flame propagation theory seems to have a problem.

Alternatively, both the the material that is burning and the oxidant could be ejecting laterally from the tank - carrying the flame with it. From what I can tell, this is exactly what is happening. The combustion started within the tank, created a lateral crack in the wall, and sprayed out.
Last edited: Sep 12, 2016
berkeman
Mentor

liometopum said:
Musk is asking if anyone else has photos or videos, so conjecture away!

Greg Bernhardt said:
If a PF member could help that would be incredible! PF team assemble! :)

So the Mentors have been discussing this thread, and the thread should be fine as long as it sticks to the established facts and the science behind the rocket. The PF rules obviously apply, so please be like Jim in your posts, and show the science behind your speculations about what may have happened.

As a side note on rowvid.com, I was puzzled by that domain name, so I looked into it.
From http://hackersome.com/p/CalumJEadie/rowvid-version-0
"RowVid was originally created by Calum Eadie, Andrew Ratomski and https://twitter.com/busterlj [Broken] at an Entrepreneur First Hackathon, to help rowers analyse training and race videos.
Since then it has evolved into general purpose player for frame by frame and slow motion playback of any YouTube video."

It makes sense now. I assume they were rowers at Cambridge. See https://www.linkedin.com/in/calumjeadie [Broken]
Last edited by a moderator: May 8, 2017
Stephen Tashi
Science Advisor

It might be useful to have some links to videos of other similar sized explosions that had known causes.
Tom.G
Science Advisor 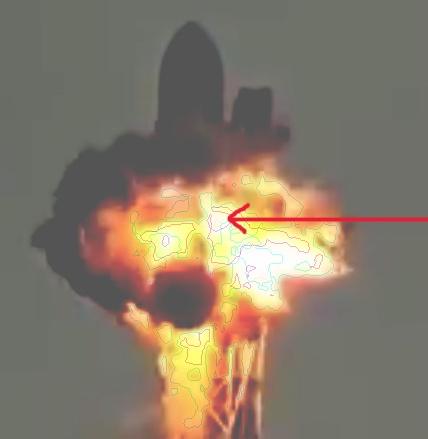 Here is what it looks like with the intensity range restricted so the bottom half of the intensity range is compressed.
The contour lines are brightness/color contours.
After viewing the video forward, backward, and stop-frame, the ignition point appears to coincide with the crescent shaped area at the arrow head. This is partially supported by a subtle color change within the crescent area (less Blue).

Visually, from the video, the initial flame front seems to travel toward the 7 o'clock position but rapidly changes to about the 5 o'clock position. Based on the above image, the origin is 3 to 3.1 nose cone diameters from the the nose cone tip at the right edge of the rocket.

Viewing the video backwards, the fireball seems to converge to a point 3.3 diameters from the tip, at the center of the rocket body.
Jonathan Scott
Gold Member

Could this be a variant of the same failure as before? If a helium tank support strut broke because of buoyancy forces during loading of the oxygen, the excess pressure in the LOX tank could split the second stage, releasing both fuel and oxidiser and also generating enough heat to ignite the mixture.
However, in that case I'd have expected the tank pressure telemetry to have recorded enough information to make that clear.
Jonathan Scott
Gold Member

After thinking about it some more, it seems likely that something to do with the helium tank could be relevant, as a sudden failure would be able to rupture the second stage very abruptly in a way which would open up both the LOX and the RP-1 tanks. The fact that the LOX tank was only passing 70% full at the time of failure might be enough to rule out anything relating to buoyancy (but I don't know the details). If a strut broke as before, I would have expected a larger time interval between the initial problem and the rupture.
Dotini
Gold Member

Would a cosmic ray passing through the tanks be enough to cause concern?
Nidum
Science Advisor
Gold Member

The oxygen tank on Apollo 13 exploded because a faulty electrical device in the tank sparked .
mfb
Mentor
Insights Author

Dotini said:
Would a cosmic ray passing through the tanks be enough to cause concern?

Every second, about 100 muons cross every square meter of the surface of Earth. No, those are completely irrelevant.

I guess SpaceX will monitor all future static fire tests and launches with a high-speed camera (maybe they do that already).
Last edited: Sep 13, 2016
liometopum

This compilation is nice. The first rocket, at 15.5 seconds, appears to explode from higher up than the Titan, in the previous post (which is included in this video compilation).
http://rowvid.com/?v=m6qJh9upqW8

You might notice that these explosions are very different from the SpaceX disaster. 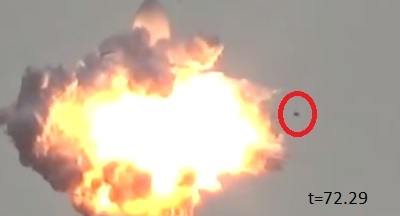 Anyone know how much delay there is in the telemetry ?

Jim, that is not a piece flying away. Go to 71.94 and look at the point at the bottom left hand corner, and then click until about 72.54. You will see the point go to the top right corner. I think that is a jet taking off from a nearby airport.
You must log in or register to reply here.

Related Threads on SpaceX Needs Us!