I'm in my second year of my degree in Physics specialising in Theoretical Physics. My second year is coming to an end now and next year we will begin a course called Advanced Classical Physics (ACP) which will introduce Lagrangian and Hamiltonian mechanics as well as SR and electrodynamics in four-vector notation. We covered SR very briefly in first year and the course was not very well taught however it is assumed that we will be proficient in answering basic problems in SR using lorentz transformations etc. for the ACP course

I was wondering if there are any textbooks that I could use for self-study over the summer which provide a good mathematical perspective (tensors and four vectors) on SR but assume no prior knowledge of the physical principles and introduce the reader to the basics of relativity as well.

I have considered "Special Relativity" by Woodhouse from the Springer Undergraduate Mathematics Series. Does anyone know if this would be suitable for a physicist with a strong mathematical inclination?

Thanks a lot for any help you could provide!

Woodhouse is a good book for your inclination.
Check out his lecture notes: http://people.maths.ox.ac.uk/nwoodh/

Thanks a lot for your help. His lecture notes look like a pretty good supplement but I think I'd probably have to go out and buy the book for a full understanding. Are the problems in the book the same as those in the problem sheets?
Goldbeetle

To really understand what's going on behind the formulas I suggest " A traveler's guide to spacetime" and "Spacetime physics" (the red cover edition).
Daverz 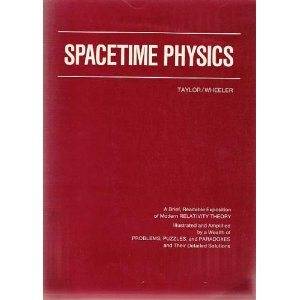 With problems and full solutions (specifically the edition above).
You must log in or register to reply here.

Other Need Help With HSC Self Study Textbooks

Other Physics textbook for self study

Physics Textbook for Self Study?

Other Maths textbooks for self-study