Speed of light circling around a black hole

Let us imagine a photon circling around a black hole, as the picture shows. 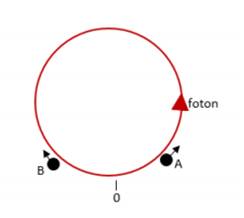 The gravity of the black hole curves the movement path of the photon into the shape of a circle. From point 0, geometric points A and B appear simultaneously with the photon, each in its own direction. The points travel slowly along the photon circumference. After the finished circle, both points and the photon return simultaneously to point 0. The photon is faster, therefore, during the time of one full circle by points A and B it makes N circles. The points encounter the photon. They do not perceive the photon and their encounters are monitored at the level of geometry. Point B, moving in the opposite direction than the photon, encounters the photon N + 1 times. Point A, which moves in the direction of the photon motion, encounters the latter N-1 times. Points A and B finish the circle simultaneously. Equal times of the circling are the result of the simultaneous departure of the points from point 0 and their simultaneous return to point 0 after the completed round-trip. The points (observers at those points) find that point A detects less encounters with the photon than point B, and thereby also shorter photon paths. Point A detects the path of the photon in the length of (N-1)- times the 'length of the circumference', while the point B detects the path in the length of (N + 1)-times the 'length of the circumference'. The points detect different lengths of photons paths within the same time. They detect different photon speeds. Our belief that light has the same speed in all situations is thus perhaps not justified.

Your post is based on misconceptions about how spacetime geometry works. You cannot use arguments like this, which are essentially based on an underlying Euclidean spatial geometry. If the photon travels in a circle (for which there is only a single fixed radius for a Schwarzschild black hole that is possible), then nothing that moves slower than light can travel on the same circle. Your observers A and B would quickly fall into the black hole.
Rozman

The circular path of a photon instead of a black hole can create a circular optical fiber. What would be the explanation in this case?
Orodruin
Staff Emeritus
Science Advisor
Homework Helper
Insights Author
Gold Member
2021 Award

First of all, light does not propagate at the speed of light in an optical fibre. Second, both your observers would have different notions of both time and space as compared to the rest frame of the optical fibre so you cannot really use the concept of space from the optical fibre rest frame to deduce the speed as measured by the observers. The speed you are imagining is essentially a coordinate speed, not a physical one, which is what is measured locally by the observers.
Nugatory
Mentor

Rozman said:
Our belief that light has the same speed in all situations is thus perhaps not justified

You are misunderstanding what it means to say that the speed of light is the same in all frames. If a freefalling observer at point A or point B were to measure the speed of the flash of light as if it passed them, they would get ##c## regardless of their state of motion. That's what we mean when we say the speed of light is constant.
Nugatory
Mentor

In the fiber optic case, we can replace the cable with a series of mirrors bouncing the light around the path - yes, now the path is a polygon instead of a circle, but that doesn't change the general idea. But do our two observers, moving relative to one another, agree about the distances between the mirrors after allowing for length contraction? Do they calculate the same length for the path the light followed? Googling for "Sagnac effect" will find much more about this particular experiment (which, unlike the black hole one, can and has been done).

In the black hole case, it's impossible to arrange for the same freefalling observer to encounter the flash of light twice. The best we can do is to replace each observer with a pair of observers, and then carefully time when we drop them into the black hole so that they both encounter the flash of light. But that creates two new problems: first, how do we synchronize their clocks; and second, which two points in the orbit of the flash of light are we trying get to? These are arbitrary choices, and the "speed of light" that comes out of them is no less arbitrary.
Dale
Mentor
Insights Author
2021 Award

Rozman said:
Our belief that light has the same speed in all situations is thus perhaps not justified.

Your belief may be not justified because it is based on a misunderstanding. My belief is justified. Your belief is not the same as mine.

The effect you are describing is commonly called the Sagnac effect. The correct understanding of the 2nd postulate can be used to derive the effect. So not only does it not represent a failure of SR, it is a result of SR.
PeterDonis
Mentor
Insights Author

Nugatory said:
In the black hole case, it's impossible to arrange for the same freefalling observer to encounter the flash of light twice.

Actually, it isn't--the observer can be flying upwards in free fall at the first encounter and falling back down at the second.

Also, one could set up a scenario where the observers were not in free fall but using rocket power to hover at the same altitude as the photon orbit.

None of these refinements affect the main points of the comments by you, @Orodruin, and @Dale.
gmax137
Science Advisor

Dale said:
Your belief may be not justified because it is based on a misunderstanding. My belief is justified. Your belief is not the same as mine.

This may be true, but it is a bit harsh. At least the OP is thinking, not sitting passively in class absorbing the words of the lecturer.
Dale
Mentor
Insights Author
2021 Award

gmax137 said:
This may be true, but it is a bit harsh. At least the OP is thinking, not sitting passively in class absorbing the words of the lecturer.

It is accurate and clear, so as to prevent any possible misunderstanding. Based on previous interactions with @Rozman I think that clarity is absolutely essential. Particularly since he has previously indicated similar confusion about non inertial reference frames.

Also, at no point did I make any sort of ad-hominem remark saying anything negative about him as a person. I was entirely addressing his incorrect idea. I did so firmly, clearly, and without any personal attack.
Share:
Share

Related Threads on Speed of light circling around a black hole

Speed of light and a black hole

H
Speed of light in a black hole

P
Black hole traveling near the speed of light

Speed of Light and Black holes

E
I Black hole waterfall analogy and speed of light

Question about speed of light and black holes