The Triumvirate of Maths, Matter & Mind

The views important to this thread are probably best espoused in the following video and paper:


Piet Hut said:
We discuss the nature of reality in the ontological context of Penrose's math-matter-mind triangle. The triangle suggests the circularity of the widespread view that math arises from the mind, the mind arises out of matter, and that matter can be explained in terms of math. -- On Math, Matter and Mind

I am interested in the opinion of others with regard to this 'ontological triangle'.

Do people think it exists and is it a valid description/exploration of reality?

Which of the three pillars is most 'fundamental'?

Does that question even make sense?


I'd love to hear what you have to say, so please discuss away!

Kherubin said:
I am interested in the opinion of others with regard to this 'ontological triangle'.

Which of the three pillars is most 'fundamental'?

Starting with the elements of the triangle, matter is ontology (a term for physically real stuff or substance). Maths is epistemology (a term for the modelling of form - the patterns and self-consistent organisation we observe in nature). Mind is, well, a term that inhabits an uneasy position in that it is both physically real (we exist) and is also the basis of epistemology (modelling is in general what minds do, maths being the most generic basis of how minds do it).

So restating the triangle in epistemological terms, it would be a relationship between the model (the mathematically described form) and the material measurements (the physical observations that animate the dry equations).

And all this take place in the mind of a modeller. Which specifically is usually taken to be a conscious human. But described generically, would be just a modelling system. So a thermostat could be taken as a very reduced type of epistemological triad. It embodies a model that makes measurements and does all this for a purpose.

So described epistemologically, there seems no big mysteries here. Models, measurements and modellers form a natural system. All three elements are fundamental to the business of modelling and stand in a relationship.

Then ontically, we could instead say there are the physically real elements of matter, organisation and system. You need local substance, you need global form, and with the right interaction you get the persistent structure of a system.

Again, where is the mystery now?

Time and again people ask is maths real, is matter platonic, is mind the source of either or just an epiphenomenal result? But this is because epistemology gets confounded with ontology.

Now the two can be mapped on to each other. This is what semiotics does. The physically real - the universe as a whole, with its matter and laws - can also be seen as a modelling relationship.

But it has to be done this way, as an epistemological triangle mapped to an ontological one. Not by mixing up terms from the two sides of the relationship between a model and the modelled.
Q_Goest
Science Advisor
Homework Helper
Gold Member

Perhaps it would be worth adding a bit more background. Here's an excerpt from Penrose, "The Road to Reality" (pg 17) I think you need to look at the figure Penrose supplies when reading this.

Thus mathematical existence is different not only from physical existence but also from an existence that is assigned by our mental perceptions. Yet there is a deep and mysterious connection with each of those other two forms of existence: the physical and the mental. In figure 1.3, I have schematically indicated all of these three forms of existence - the physical, the mental, and the Platonic mathematical - as entities belonging to three separate 'worlds', drawn schematically as spheres. The mysterious connections between the worlds are also indicated, where in drawing the diagram I have imposed upon the reader some of my beliefs, or prejudices, concerning these mysteries. 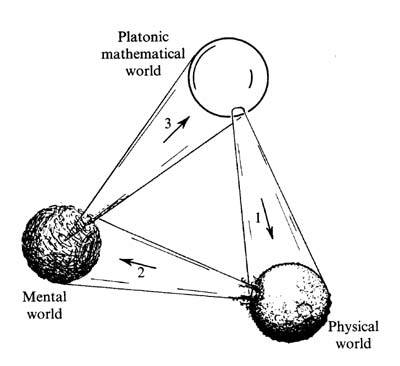 FIG 1.3 Three 'worlds' - the Platonic mathematical, the physical, and the mental - and the three profound mysteries in the connections between them.

It may be noted, with regard to the first of these mysteries - relating the Platonic mathematical world to the physical world – that I am allowing that only a small part of the world of mathematics need have relevance to the workings of the physical world. It is certainly the case that the vast preponderance of the activities of pure mathematicians today has no obvious connection with physics, nor any other science, although we may be frequently surprised by unexpected important applications. Likewise, in relation to the second mystery, whereby mentality comes about in association with certain physical structures (most specifically, healthy, wakeful human brains), I am not insisting that the majority of physical structures need induce mentality. While the brain of a cat may indeed evoke mental qualities, I am not requiring the same for a rock. Finally, for the third mystery, I regard it as self-evident that only a small fraction of our mental activity need be concerned with absolute mathematical truth! (More likely we are concerned with the multifarious irritations, pleasures, worries, excitements, and the like, that fill our daily lives.) These three facts are represented in the smallness of the base of the connection of each world with the next, the worlds being taken in a clockwise sense in the diagram. However, it is in the encompassing of each entire world within the scope of its connection with the world preceding it that I am revealing my prejudices.

Thus, according to Figure 1.3, the entire physical world is depicted as being governed according to mathematical laws. We shall be seeing in later chapters that there is a powerful (but incomplete) evidence in support of this contention. On this view, everything in the physical universe is indeed governed in completely precise detail by mathematical principals – perhaps by equations, such as those we shall be learning about in chapters to follow, or perhaps by some future mathematical notions fundamentally different from those which we would today label by the term ‘equations’. If this is right, then even our won physical actions would be entirely subject to such ultimate mathematical control, where ‘control’ might still allow for some random behaviour governed by strict probabilistic principals.

Many people feel uncomfortable with contentions of this kind, and I must confess to having some unease with it myself. Nonetheless, my personal prejudices are indeed to favour a viewpoint of this general nature, since it is hard to see how any line can be drawn to separate physical actions under mathematical control from those which might lie beyond it. In my own view, the unease that many readers may share with me on this issue partly arises from a very limited notion of what ‘mathematical control’ might entail. Part of the purpose of this book is to touch upon and to reveal to the reader, some of the extraordinary richness, power and beauty that can spring forth once the right mathematical notions are hit upon.

In the Mandelbrot set alone, as illustrated in Figure 1.2, we can begin to catch a glimpse of the scope and beauty inherent in such things. But even these structures inhabit a very limited corner of mathematics as a whole, where behavior is governed by strict computational control. Beyond this corner is an incredible potential richness. How do I really feel about the possibility that all my actions, and those of my friends, are ultimately governed by mathematical principles of this kind? I can live with that. I would, indeed, prefer to have these actions controlled by something residing in some such aspect of Plato’s fabulous mathematical world than to have them be subject to the kind of simplistic base motives, such as pleasure-seeking, personal greed, or aggressive violence, that many would argue to be the implications of a strictly scientific standpoint.

Yet, I can well imagine that a good many readers will still have difficulty in accepting that all actions in the universe could be entirely subject to mathematical laws. Likewise, many might object to two other prejudices of mine that are implicit in Fig 1.3. They might feel, for example, that I am taking too hard-boiled a scientific attitude by drawing my diagram in a way that implies that all of mentality has its roots in physicality. This is indeed a prejudice, for while it is true that we have no reasonable scientific evidence for the existence of ‘minds’ that do not have a physical basis, we cannot be completely sure. …

A further prejudice of mine is reflected in the fact that in Fig. 1.3 I have represented the entire Platonic world to be within the compass of mentality. This is intended to indicate that – at least in principal – there are no mathematical truths that are beyond the scope of reason. Of course, there are mathematical statements (even straightforward arithmetical addition sums) that are so vastly complicated that no one could have the mental fortitude to carry out the necessary reasoning. However, such things would be potentially within the scope of (human) mentality and would be consistent with the meaning of Fig. 1.3 as I have intended to represent it.

Q_Goest said:
Perhaps it would be worth adding a bit more background. Here's an excerpt from Penrose, "The Road to Reality" (pg 17) I think you need to look at the figure Penrose supplies when reading this.

The Hut/Alford/Tegmark paper starts with the general agreement that Penrose's triangle is incoherent and then debates the reasons why it is incoherent. Are you saying you find it coherent?
apeiron
Gold Member

Another view of this tries to map Popper's three worlds to Rosen's modelling relation. Again there is a problem in keeping like with like, epistemology with epistemology and ontology with ontology, but it may illustrate the issues.

Basically Dress says there is a material world that minds model. The material world is objective. But so too are the cultural products that result from the collective actions of mind, products such as maths and other stuff that gets physically written down or otherwise materially instantiated (Popper's definition of world 3).

So you have maths as ontically real in a third realm of ideas concretely expressed, with mind being the subjective realm handling the intermediary activities of prediction and measurement (or encoding and decoding as Rosen puts it, the informal part of modelling).

And contrariwise, while the objects of our thoughts can be given concrete expression, that is only a writing down of symbols. The meanings they symbolise remain subjective, epistemic. World 3 does not really have a physical existence. Even if it is really handy to have books, computers and other ways to make records and manipulate symbols that other minds can read meaning into.

apeiron said:
The Hut/Alford/Tegmark paper starts with the general agreement that Penrose's triangle is incoherent and then debates the reasons why it is incoherent. Are you saying you find it coherent?

Did you watch the interview with Max Tegmark? I don't believe the paper is suggesting Penrose's triangle is incoherent. The three authors of the paper take different views of it. So if it is incoherent, it is only incoherent to the degree of one's intepretation. That's essentially what Tegmark is saying in the interview regarding the paper.
apeiron
Gold Member

Q_Goest said:
I don't believe the paper is suggesting Penrose's triangle is incoherent.

I dunno. It looks like they wanted to cross out respectively one, two or all three of the suggested connections that made his triangle. That certainly looks to me like a lack of triangular cohering.

So are you saying you go with Penrose? Or do you have some other view?
Log in or register to reply now!

Related Threads on The Triumvirate of Maths, Matter & Mind

Mind and matter, one and the same ?

Mind Over Matter and Ice Cubes

Law of Magnetic Attraction?Power of mind over matter?

Math things that blew your mind
3

Perspectives of the Mind