Thought experiment with one photon

No, and any time you find yourself saying "at the same time" you should stop and think about the relativity of simultaneity. After one year as measured by A, the light will be one light-year as measured by A from A; and likewise for B. However, thanks to length contraction and time dilation, those two events do not happen in the same place.
phinds
Science Advisor
Insights Author
Gold Member
2021 Award

How could the photon be 1 light year away from #2 ??? It's one LY away from where he was when it was emitted, but he's not standing still. If he were traveling at .999c (tough to do, but this is a though experiment) how far away from him to you think the photon would be?
yuiop

Here's a spacetime diagram depicting the situation in observer #1's rest frame. Observer #1 is shown in blue and observer #2 is shown in black. The path of the photon is the thin blue line and after one year according to observer #1's clock, I have placed a green dot to show where it is (one light-year away or 12 light-months away). The other dots mark off one-month increments of time for the two observers: 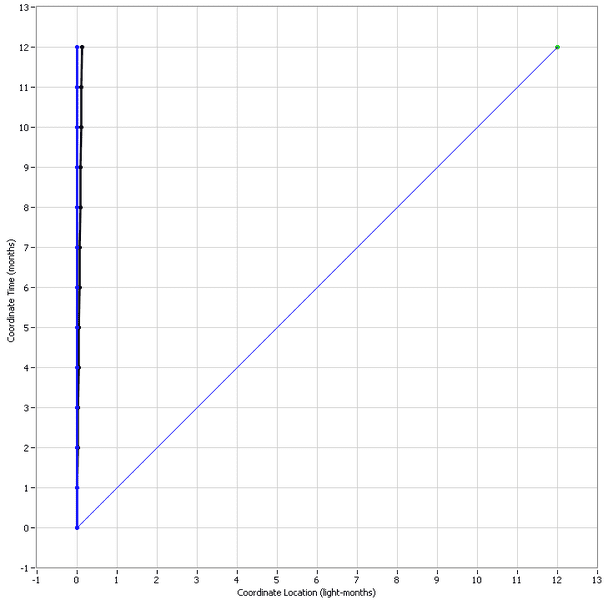 Now to see what this looks like in observer #2's rest frame, we have to apply the Lorentz Transformation process to the events (dots) and we get: 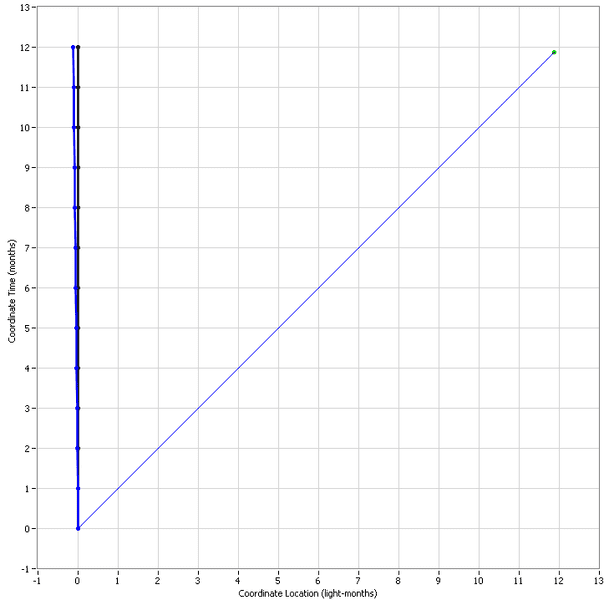 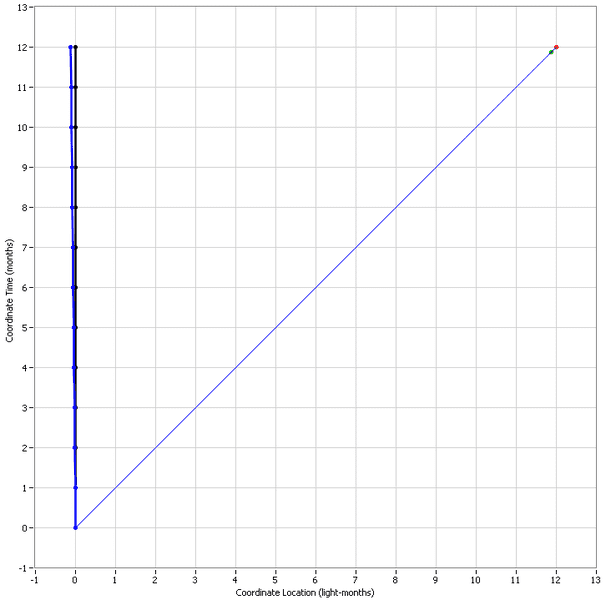 And for completeness sake, we can transform this new event back into the rest frame of observer #1: 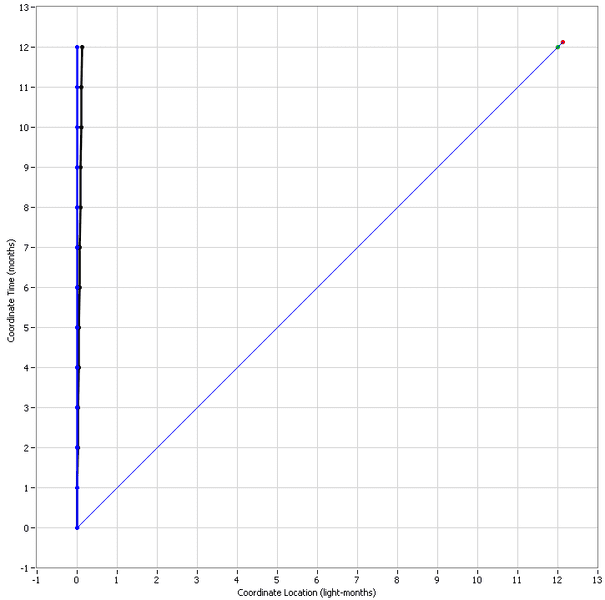 This really has nothing to do with Time Dilation or Length Contraction since at 0.01c gamma is 1.000050 and not observable on these diagrams. It only has to do with the assignment of the speed of light to be c in any inertial frame and light is not subject to Time Dilation or Length Contraction. In any case, using the Lorentz Transformation process on the coordinates of events in one inertial frame to see what they look like in a second inertial frame will always give you the correct coordinates.

And one other thing I want to point out, this also has nothing to do with any measurement. Once the photon is emitted, neither observer has any awareness or knowledge of where that photon is--they can't see it, it's simply a matter of applying Einstein's second postulate to any inertial reference frame, that the speed of light propagates at c.

Does this all make sense to you now?

ghwellsjr, may be you should make pictures using a larger speed. something like v=0.5c. That would make it easier to see your point. As is, you pictures look too much like each other due to the small speed v=0.01c and that's not helping the point you made.
ghwellsjr
Science Advisor
Gold Member

dauto said:
ghwellsjr, may be you should make pictures using a larger speed. something like v=0.5c. That would make it easier to see your point. As is, you pictures look too much like each other due to the small speed v=0.01c and that's not helping the point you made.

I did what the OP asked for and I think it makes the point quite well. What did you think is the point I made that isn't already covered?
ghwellsjr
Science Advisor
Gold Member

keepit said:
Assume you have observer #1 who emits one photon (can that even be done?)

It's not possible to control the exact moment that a single photon is emitted but we can assume that it did happen for the sake of illustrating principles.

Again, it's not possible to set this up to happen exactly as you describe, but if we repeat the experiment many times, we can eventually find a case where it did happen, at least close enough in time that we can use it for illustrating the principles of Special Relativity.

Of course, we have this other little problem of getting an actual observer to travel at .01 c relative to another observer for a whole year (do we have to bring him back?) but since this is a thought problem, we ignore all the practical details and just pretend that we could actually overcome all the technicalities (including the effects of gravity). We even pretend that a photon occupies zero space (which it doesn't). But if we wanted to, we could specify a more realistic and complex scenario and use that to illustrate the principles of Special Relativity, but it wouldn't be any more enlightening than a more simple but unrealistic scenario like we are doing in your specified scenario. And keep in mind that we are also ignoring quantum effects in thought problems like this.

No, a photon is only in one place at any given time according to a specified Inertial Reference Frame (IRF) and if we specify the time, place and direction according to a particular IRF, then according to Special Relativity, we know it's trajectory until it hits something. Once we specify a particular scenario (that is, where everything is as a function of time in one IRF), we can apply the Lorentz Transformation process to the coordinates of all events (their locations and times) and see what it looks like in any other IRF. This is what I did for you in post #5. Did those diagrams help you understand the answers to your questions?
Share:
Share

Suggested for: Thought experiment with one photon

Help with a thought experiment.

B Thought Experiment With Test Particle

A Thought Experiment with Time Dilation