I'm currently taking a college level physics course, and I'm struggling with the idea of angular momentum, whereas linear was fairly intuitive I guess something seems amiss when trying to understand rotational applications. Lets take the idea of a spinning wheel. The direction of angular momentum is a cross product giving it a direction perpendicular to the wheel this seem odd as no component of the wheel is moving in this direction. I've seen applications like gyroscopes but I guess I don't really understand, If anyone has anything to help explain angular momentum it would be appreciated. This is a first post, I've really been quite taken with physics since enrolling in this class, and this forum appears to be a gold mine of resources. Thank you in advance.

Yeah, the direction of the the angular momentum vector can seem rather perplexing at first. I'll gloss over the technical explanation and try to give you an intuitive one.

If you need anything elaborated on, just say so.
undereducated

Appreciate the answer monocles, but to tell you the truth I'm still fuzzy. I'm with you on why it is practical to attach the vector to the axis of rotation. It seems that there is more to the direction of that vector though, than just bookkeeping. I guess I'm wondering how the direction of spin imparts a physical property to the object that affects it in a direction other than the way its spinning . Maybe my question is mathematical, why cross product? Because that's what's giving it the perpendicular direction, no? Anybody got a good derivation for dummies on this. I think a lot of people in my class just want to know how to 'work' the problems so we seem to avoid the 'why' a little bit.
rcgldr
Homework Helper

Consider the alternative of using a two dimensional "disc" to represent angular components. The size of the disc could represent the magnitude, and the axis of the disc would be the axis of rotation of the object being represented. The problem is how to perform math on planes instead of vectors.

Vector math is easier, so vectors are used to deal with angular momentum, torque, acceleration, ... The vector coincides with the axis of rotation, and the length of the vector represents a magnitude.

Angular position is a bit tricky, since it's just an angle, and you'd need some consistent rule for what a position of zero angle is.

Regarding cross product, it just works out that the cross product of a linear radial vector and a linear tangental vector produces an appropriate vector to represent an angular quantity, such as torque = radius times force.
atyy
Science Advisor

Jeff Reid said:
Consider the alternative of using a two dimensional "disc" to represent angular components. The size of the disc could represent the magnitude, and the axis of the disc would be the axis of rotation of the object being represented. The problem is how to perform math on planes instead of vectors.

That's interesting! I think area is also a cross product - do you think that's a way to go from your disc idea to the cross product?
vorcil

why does the angular momentum go through the z axis? 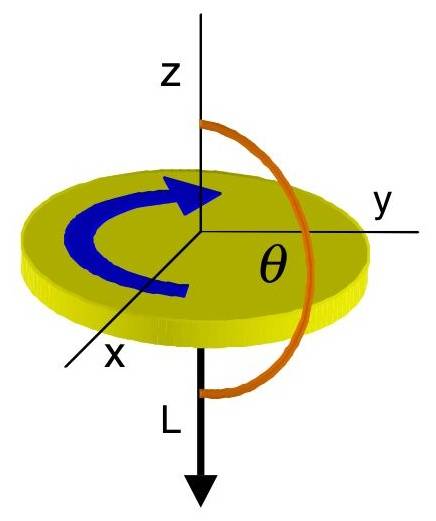 i don't get why, i would've thought it was along the x axis due to some kind of PI product?

vorcil said:
why does the angular momentum go through the z axis?

It's actually located in the X-Y plane but as I mentioned above, how do you do math with "planes" or "discs" as opposed to vectors? It's just a convention to mathematically represent angular momentum as a vector perpendicular to the plane of rotation.
Monocles

I think it's just bookkeeping. To me it's very natural that the cross-product represents rotation because of the right hand rule. When you do axb, you use your right hand and curl (rotation!) your fingers to sweep a into b, and where your thumb points gives you the direction. Using your right hand instead of left is just a convention, just like clockwise and anticlockwise are conventions.

I know there are two right hand rules. Some people use the one where three fingers stick out. I'm talking about the one in this picture: http://hyperphysics.phy-astr.gsu.edu/hbase/magnetic/magfor.html.
undereducated

undereducated said:
Why does the right hand rule apply in nature?

It doesn't, left hand rule would work just as good. In the cases of charged particle centripetal acceleration perpendicular to fields, we chose a sign for the direction of the fields and particles that work with right hand rule. We also chose to mathematically represent current flow in the opposite direction of electron flow, something that could be changed but isn't because we can't teach the old mathematicians and physicists new tricks.
undereducated

Ahhhh, thanks Jeff. I see what you are saying. My precession example (I saw the old bicycle wheel on a stool bit) is really just a relationship between two angular momentums, and the direction of vectors just keeps track of the spin. Its a matter of convention that allows you to be consistent. Good to know. Thanks everybody.
Share:
Share