Two electric field problems - pick one or both!

Here are two problems, both of which I'm not really sure where to start. The simpler (?) one first:

A 1.10-mm-diameter glass sphere has a charge of +1.10 nC. What speed does an electron need to orbit the sphere 1.80mm above the surface?

I thought of using v = (2*pi*r)/T because it is circular motion, but I can only derive "r" (I got r = 0.00235m, though I'm not sure if this is right. I know the sphere acts as a point charge and measured the 1.8mm and the radius of the sphere.). I don't feel like the electric field equations would get me anywhere.

The ink drops have a mass m = 1.00×10−11kg each and leave the nozzle and travel horizontally toward the paper at velocity v = 22.0m/s . The drops pass through a charging unit that gives each drop a positive charge q by causing it to lose some electrons. The drops then pass between parallel deflecting plates of length D0 = 1.65cm, where there is a uniform vertical electric field with magnitude E = 8.10×104N/C .

If a drop is to be deflected a distance d = 0.250mm by the time it reaches the end of the deflection plate, what magnitude of charge q must be given to the drop? Assume that the density of the ink drop is 1000kg/m3 , and ignore the effects of gravity. 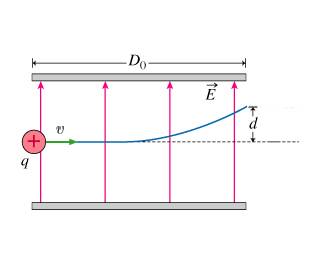 This one ... not a clue where to begin. I've got my electric field formulas ready to go. I'd appreciate any nudges you guys can give on either problem.

For the first, you can think of the Coulomb force as the equivalent of the Newton gravitational force for charges (this is not quite right, accelerated charges would radiate, but I think that's all what the problem is about, just neglect radiation).

For the first, I've got nothing. Generically, I developed:

Well, the charge q appears in the Coulomb force, which gives you the acceleration, right?
Log in or register to reply now!

Related Threads on Two electric field problems - pick one or both!

One pulley attached between two blocks, both sliding on wood.

A particle accelerating in both magnetic and electric fields

Two metal rods, one silver and the other copper, are both immersed at

Gamma radiation. Nuclear, electromagnetic or both?

Magnitude of force one crate exerts on another (both touching)

This one has bothered me for a while (electric field)

Problem with Sines on both sides