When acceleration and velocity vectors on the same graph.

For my question I stated above, I know that we can break them apart into vector components i and j; however, I don't understand what that means in real life and what is going on.

jlyu002@ucr.e said:
So basically, on an x-y coordinate system, the acceleration vector is in between 0 degrees and 90 degrees pointing north east, and the velocity component is pointing directly east resting on the x-axis. I was wondering what phenomena this represents in real life

Any situation where the applied force is not in the same direction as the velocity: take your pick.
eg. speeding up while going around a corner ... the instantaneous total acceleration will be the sum of centripetal and tangential accelerations ... in this example, the center of the turn is to the north at the instant described. You'd also get this from (say) a hovercraft traveling at a constant speed east while the wind blows from the south-west - pushing it off-course; or where a charged particle is fired at an angle to the electric field.

and I was also wondering, with the velocity pointing east resting on the x-axis for the next cases, what would it look like when the acceleration is pointing northwest, southwest, and south east.

You can work it out by resolving the acceleration vector against the E-W axis ... the N-S component will push it off line and the E-W component will speed it up or slow it down.

This is not the case - you have already said that there is an acceleration so, by definition, the velocity cannot be constant.

Breaking into components is a handy way to analyse the effect of forces/accelerations on motion ... what the force does is change the magnitude and the direction of the momentum vector.

A simple example ... the object moves to the east with constant speed ... then a force is applied producing an acceleration to the west. Initially the object slows down... then it stops ... then it heads off to the west, picking up speed.

If the same force is applied, but always north-west, then the object drifts to the north and slows down, changing direction and speed until it is traveling north-west and picking up speed.

If the same force is applied due north, then the object travels on a parabolic path towards the north... the rate of travel in the easterly direction is not affected.

Here's an example of two cases... 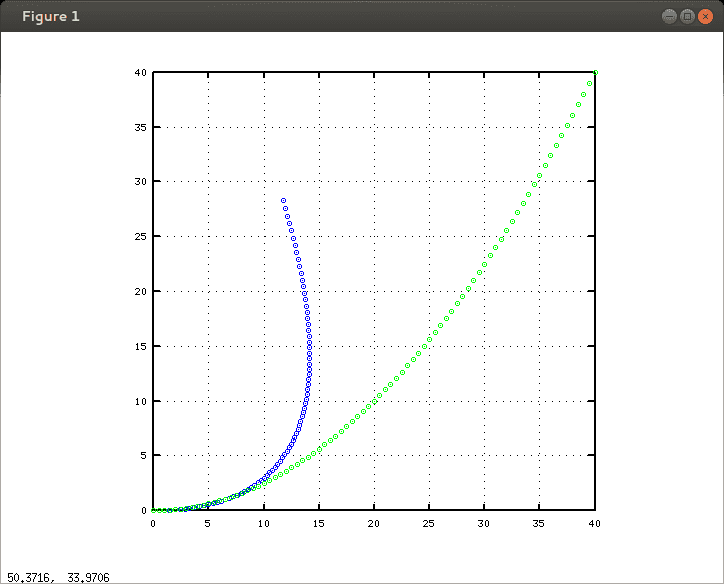 These are the trajectories of two objects both experiencing the same acceleration (0.2cm.s-2) from the same initial velocity (2.0cm.s-1 E) and sampled at 1/4 second intervals over 20 seconds. Both objects start out at the origin. +y is North and +x is East. Axis are labelled in centimeters.

Everything else is pretty clear; however, for the situation in which the acceleration points north and the velocity points east, does that mean only direction is changing? Because there is no j component for velocity and an only i component.
jlyu002@ucr.e

oooo i get it. There is an acceleration pointing up. therefore the object traveling in the positive direction is being forced upwards.
jlyu002@ucr.e

Yes! I get it!
Simon Bridge
Science Advisor
Homework Helper

That's right, it's the green one above.

Notice that the distance between circles gets bigger too? This means the total speed is increasing as well as the direction of travel changing.

The blue one has the force 45deg W of N ... as that angle gets closer to 90deg W of N, the curve gets tighter and sharper until, at 90deg W of N = due W, the object just doubles back on itself.
jlyu002@ucr.e

Cool, yeah as the velocity of the object turns into the direction of the acceleration it starts to speed up. Thanks so much Simon. Phew. Lastly, is the graph that you posted position vs time? I think it is because the slope of that graph represents velocity increasing. and the slope velocity increasing would be a constant upward acceleration. Nvm, figured it out. haha.
Simon Bridge
Science Advisor
Homework Helper

You can plot these things yourself ... I used gnu/octave.
I had to resolve the vectors to components to compute x(t) and y(t) but I plotted (x,y).

Suggested for: When acceleration and velocity vectors on the same graph.

I When are the initial and final momentums the same (conserved)?

B Trying to understand this paragraph on speed, acceleration and velocity from my textbook

Why is the velocity (vector) the same value as the speed (scalar)?

I Reaction moment on I.C. engine when we increase RPM

If moving water vapor transitions to ice in space, do the acceleration and velocity change?

Newton's 2nd law -- How can force only depend on mass and acceleration and not on velocity?

When a mass is in SHM, what is the relationship between velocity and acceleration?

I Wave number, frequency, and velocity in dispersive waves