Today, my class had a dispute between who was right. Two answer keys for this problem was provided, so nobody knows the exact answer to this problem. Half of my class said 100 N while the others said 298 N or something.
We won't talk about how I wasn't listening to that because I was trying to figure out why we had two answers...
Anyways, please help me figure out the true answer to this problem: Will it, or will it not?

1. Homework Statement
The maximum force that the handles on a grocery bag can withstand and not rip is 250 N. If 20 kg of groceries are lifted from the floor to the table with an acceleration of 5 m/s2, will the bag hold? 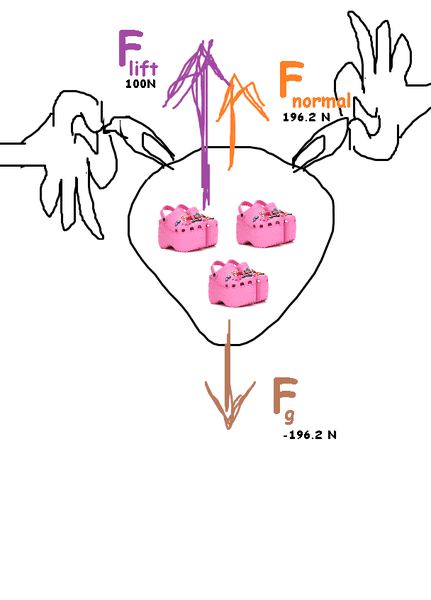 "is it the force of someone's money dwindling because they bought platform crocs?"

WHICH ONE IS IT?!

Your summation of forces is incomplete. You're missing gravity.
gneill
Mentor


sam cole said:
The maximum force that the handles on a grocery bag can withstand and not rip is 250 N.

Are there two handles, each capable of withstanding 250 N, or does the 250 N apply to both handles taken together?
sam cole


Are there two handles, each capable of withstanding 250 N, or does the 250 N apply to both handles taken together?

Drakkith said:
Your summation of forces is incomplete. You're missing gravity.

Okay. That was the equation given in our textbooks, and the first equation was given after looking it up.
I believe there was another one that had all the forces added, but I don't have that on hand nor do I remember using it here.
So the answer would be "No", correct?
Drakkith
Staff Emeritus
Science Advisor

sam cole said:
So the answer would be "No", correct?

I haven't checked the calculations, but if they are correct, I would say no.
haruspex
Science Advisor
Homework Helper
Insights Author
Gold Member

It is important to be clear about the system for which you are summing the external forces. The equations above are correct if the system is the bag and contents. The net force on that is indeed 100N. But that is not what you want to know - you want the tension in the handle.
What forces make up the ΣF here?
Chestermiller
Mentor
Insights Author

@sam cole : Have you tried drawing a free body diagram? What does that show? in your analysis, are you saying that, if the bag were not accelerating upward, it would require zero force to lift the bag containing the 20 kg mass? Does this make sense to you?
CWatters
Science Advisor
Homework Helper
Gold Member

What would the force be if the bag was just hanging from your hand (eg not being accelerated upwards).
Cutter Ketch

WHICH ONE IS IT?!

They are both correct. In fact they are identical. As you showed, the SUM of the forces does indeed = 100N. You just didn’t bother writing out the left hand side. The two forces which are being summed on the left are gravity pulling down and the lifter pulling up.

Cutter Ketch said:
They are both correct. In fact they are identical. As you showed, the SUM of the forces does indeed = 100N.
...

I was (and still am) inclined to say that both solutions have errors and therefore, both are wrong. However, I expect that some of the students who got 296.2 newtons for ##\ F_\text{lift} \ ## may have actually used correct justification and correct labeling of the result.

What is Newton's 2nd Law of motion? It can be stated in a number of ways. A way consistent with what you have is:

FNET = ma , where FNET is the (vector) sum of all the forces acting on a body of mass m, and a is the body's acceleration.​
RE: The attempt at a solution by you (OP) & 3 classmates.
As @Cutter Ketch points out, the sum of the forces does equal 100 newtons as you claim. However, you did not get this by summing the forces, as one force was unknown, but you got this computing ma . Unfortunately, this is not the lifting force necessary to accelerate the bag upwards at 5.0 m/s2, but it is the net force needed for that acceleration. The unknown lift force is vertically upward, weight, mg, is directly downward, so following Cutter's advice, the sum of the forces (net force) is ##\ F_\text{lift}-mg \,. ## Solve for ##\ F_\text{lift} \ ## to find the force required for an object of mass, m, to accelerate at 5.0 m/s2.

Briefly, as I see it there are at least the following two problems with the first solution, the one attributed to the other "half" of the class:
1) If FNET were to be 296.2 newtons and was applied to an object with a mass of 20kg, the resulting acceleration would be 296.2 / 20 .

It may be fine as an algebraic step in getting to the solution, but unless you have learned how to deal with accelerating frames of reference, it should not be a starting point.
The equation, FLIFT = ma + mg, might be acceptable if it's explained that the Lifting force must exceed mg by enough to produce an acceleration of ma.​
As an old Physicist and old physics teacher: Yes students, I know, I'm unreasonably picky a times.