Why the work done is the area enclosed by the graph of F versus x on x Axis?

Why work done is area enclosed by graph of F v/s x on x Axis but not y axis.
Suppose we apply a force on object which is proportional to displacement as ##\vec f##=## \vec x##²then area enclosed by Force and displacement on x Axis is integral of ##\vec x##²but on y axis it should be integral of ##\vec x##.from this I conclude that something is not correct in my reasoning but I can't figure it out.

Work done by Force along the course C of the coordinate is
[tex]W=\int_C \mathbf{F}\cdot\mathbf{dl}=\int_C (F_xdx+F_ydy+F_zdz)[/tex]
where ##\mathbf{dl}=(dx,dy,dz)## is tangent to C.
I do not find privileges among X-axis, Y-axis and Z-axis.
Dale
Mentor
Insights Author
2020 Award

@Hemant your post is pretty unclear. Are you asking about x and y axes in terms of physical space or in terms of a graph?
Hemant

Dale said:
@Hemant your post is pretty unclear. Are you asking about x and y axes in terms of physical space or in terms of a graph?

Please explain your question clearly. One word responses like this are unhelpful.
256bits
Gold Member

That's the definition.
and your post is a bit unclear.

Correct me if I have misinterpreted your post.
You are addressing, I believe something that is useful for linear (non-linear) systems that store energy, but not in any other cases, ie ones that don't store energy.
Co-energy is a useful concept in the analysis of certain systems, and you might not even know you are using it.
An explanation
http://www.encyclopedia-magnetica.com/doku.php/coenergy
Hemant

I am trying to rephrase what I want to say,
Suppose a particle is moving along a line and it's force depends on position as ##\vec f##=##\vec x##² and we want to find work done by the force then we will find area under the curve and x axis.now my question is that why work is area under curve and x Axis but not y axis.
Last edited: Feb 9, 2020
Dale
Mentor
Insights Author
2020 Award

Hemant said:
now my question is that why work is area under curve and x Axis but not y axis.

I think this entire thread shows why one cannot empasize enough that a force is a vector a vector and nothing than a vector. The work is a scalar functional of the force along the trajectory of the particle determined by solutions of the equation of motion, i.e.,:
$$W=\int_{t_1}^{t_2} \mathrm{d} t \vec{F}[\vec{x}(t)] \cdot \vec{v}(t).$$
If it interpretable as a "area under a curve", it's the area under the graph plotting the power as a function of time,
$$P(t)=\vec{F}[\vec{x}(t)] \cdot \vec{v}(t).$$
The concept of work has to be distinguished from the less general case of a conservative force with its potential, where the potential by definition doesn't depend on the specific path choosen to evaluate the potential. Then in general it's not an area under a curve, but a line integral along a path connecting an arbitrary fixed point (in the domain where the forces are well defined) and the postion ##\vec{x}##, at which you want to evaluate the potential, and it's defined by
$$V(\vec{x})=-\int_{C(\vec{x}_0 \rightarrow \vec{x})} \mathrm{d} \vec{r} \cdot \vec{F}(\vec{r}).$$
If (and only if!) the force is a potential force this integral is independent of the specific curve connecting the point ##\vec{x}_0## with ##\vec{x}##, and
$$\vec{F}(\vec{x})=-\vec{\nabla} V(\vec{x}).$$
Sometimes it's also only locally valid (if the domain of ##\vec{F}## is not a simply connected region).
jtbell
Mentor

Hemant said:
Why work done is area enclosed by graph of F v/s x on x Axis but not y axis.

Are you asking, why does the work equal this area:

and not this area?

jtbell said:
Are you asking, why does the work equal this area:

Yes,This was the thing I tried to explain but was not able to explain . 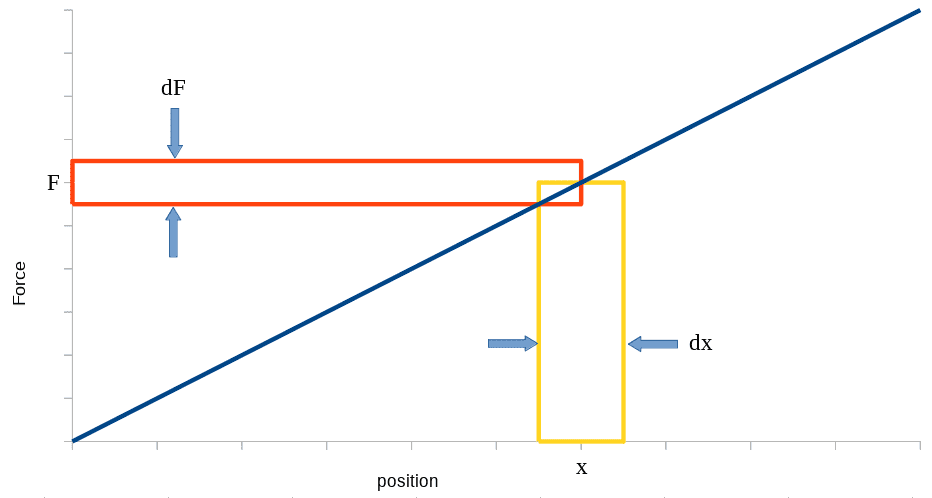 Hemant said:
Yes,This was the thing I tried to explain but was not able to explain .

Please note that this is no longer a physics question, but rather a mathematics question. It comes from the definition of the integral of a function, something that you should have come across in your calculus class.

If you have an expression where

and if you plot f(u) in the vertical axis and u in the horizontal axis, then y is the area under the graph! Notice that this has nothing to do with "work" or any other concepts in physics. Rather, it is the definition of what an integral is!

So when you apply it to work done, then when it looks identical in form to the above expression, ALL THE SAME RULES of integration also are valid there! In the example that you kept repeating, u = x, and f(u) = x2. So when you plot x2 on the vertical axis and x in the horizontal axis, then the area under the graph is the integral of that function of f(x) = x2.

Hemant said:
Why work done is area enclosed by graph of F v/s x on x Axis but not y axis.

Related Threads on Why the work done is the area enclosed by the graph of F versus x on x Axis?

Why is work done by the system a negative quantity?

Why is potential energy the NEGATIVE of the work done?

A
Work Done On or By The System

Work done by us on the spring

Why is the work done by gravity not equal to the -ΔGPE? (unrolling carpet)

Work done by the battery?

T
Why the work done is coming out to be positive?

Work done by the gravitational force