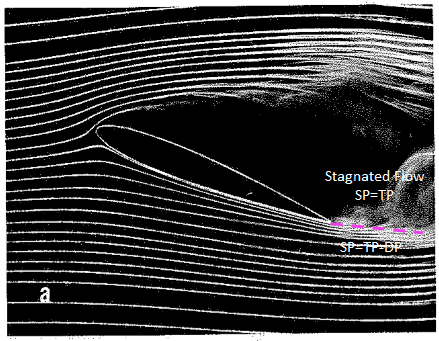 The static pressure here in the boundary layer above where the flows rejoin should be equal to the total pressure as there is no flow
SP=TP-0
Below we have a fast moving fluid with high DP as evidenced by tight streamlines
SP=TP-DP
If we were to draw a control surface line (pink line) parallel to the streamlines we have a Static Pressure gradient towards the higher speed lower pressure bottom flow
The image however shows the streamlines crossing the control surface into the higher pressure zone
How is this so
Is this the Kutta condition where SP at the trailing edge (where the flow rejoins) is stagnated therefore equal
If so we are seeing the diffusion (of the bottom flows) higher momentum towards the lower momentum area
If so shouldn't this be only at the stagnation point and further afield the pressure gradient would dominate ? We do see this as the lower streamlines actually become tighter past the trailing edge ?

What exactly are you defining as SP, TP and DP? I am just trying to make sure I am clear on your terminology.
Tom79Tom 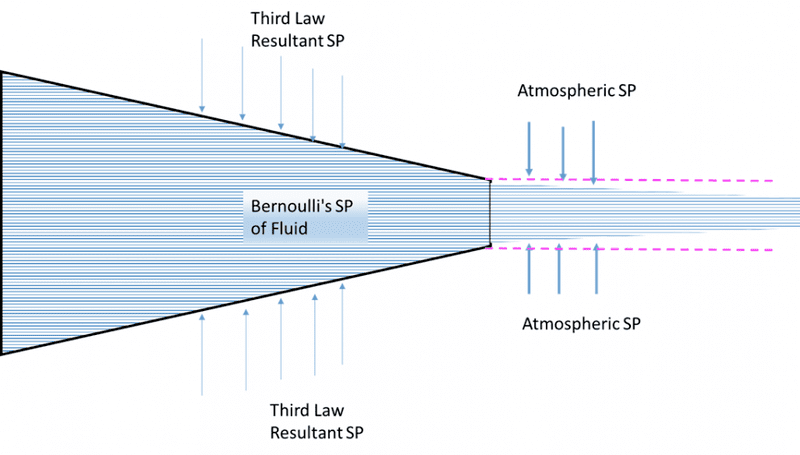 Applying this example I would expect to see the lower pressure/higher velocity streamlines below the wing converge past the trailing edge (being squeezed by the region of higher pressure stagnated flow above ) not spread out into the higher pressure zone as the original picture seems to indicate ?

What am I missing ?

Well, the flow above your control surface isn't stagnated, for one. That flow is absolutely moving. Inside that separation bubble, there is a large amount of vorticity, so it actually likely to be moving quite a bit and very well may have a very low pressure, which would explain why the flow starts to bend up at the trailing edge like that. We can't really see what is occurring inside that separation bubble, so it is difficult to make any real conclusions, but it is even possible that the flow is locally moving upstream (relative to the free stream) in some locations, which would create a whole lot of shear and could also help bend the streamlines upward.

Also, in a fire hose there is no reason for the stream to narrow like that. Generally speaking, with an incompressible jet, the outlet pressure is equal to the ambient pressure (atmospheric in this case).

Also also, if the pressure below a wing is lower than on top, the plane would fall from the sky. It would have negative lift. Now, they could be lower in pressure in the image you linked because of the huge separation region, so the wing is quite likely to be stalled at that point, but in general you shouldn't see faster, lower-pressure flow underneath. In fact, based on the streamlines, I would guess this particular airfoil is stalled and generating negative lift right now.

In this case, I would say it is simply most likely that the pressure below is still higher than in the separated region but that the overall effective change in shape of the airfoil (which now incorporates effects of the separation bubble) has caused it to enter stall, so the streamlines don't angle downward anymore like they normally would leaving the trailing edge.
Share:
Share

Suggested for: Aerodynamics vs pressure Gradient

Fluids Bernoulli and a pressure field

How water flows even after adverse pressure gradient?