Just now I began to question myself about something I learned many years ago.
When we are outside of a pool and see a coin in the floor of the pool (underwater) we think that the coin has an apparent depth that is smaller than the real depth. To calculate this we extrapolate the light ray that reaches our eyes as if it was not refracted and intercept this ray with the vertical line that passes through the coin. The point of interception is where we think the coin is, as in the figure below: 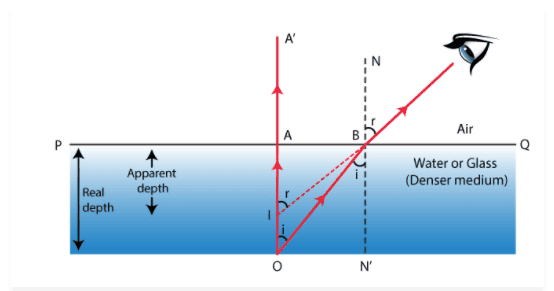 My question is: During this calculation the thing that remained "constant" was the horizontal position of the coin (we assumed that the image of the coin is in the same vertical line, perpendicular to the surface of the water, i.e. line OA). Why is that? I mean, I understand that, due to diffraction, our brain would "think" that the image is in line BI, because that is the direction of the ray that reaches our eyes. But it's not obvious to me why it would also "think" that the image is in the same vertical line as the real object.

You estimate distance from angular size in the absence of other cues, I think. Refraction has a weaker effect on the angular size than it does on the position, so your distance estimate will be only weakly affected. So I'd say the diagram is pretty reasonable, though probably very slightly idealised.
Mister T
Science Advisor
Gold Member

jaumzaum said:
The point of interception is where we think the coin is, as in the figure below:

It's where we think the coin is because that's where the image of the coin is formed. It may very well be that the image is not directly above the object, and it's a simplification made by textbook authors. I'd have to do a little research to find out.
jbriggs444
Science Advisor
Homework Helper

Mister T said:
It's where we think the coin is because that's where the image of the coin is formed. It may very well be that the image is not directly above the object, and it's a simplification made by textbook authors. I'd have to do a little research to find out.

Fair warning: this post is going to get long and has little to do with what the exercise is trying to get at.

The problem is that no clear image is formed at all.

One commonly finds textbooks talking about things like "spherical aberration" or "chromatic aberration".

Spherical aberration is, of course, the image damage that occurs when using a spherical refractor (or reflector) and looking at a portion of the image that is not exactly on the center axis. Rays from one point on the physical object will not all converge at a single point on the real image.

Say that we trace one ray that goes slightly above the line of sight and strikes the top edge of the pupil and another ray that goes slightly below the line of sight and strikes the bottom edge of the pupil. The eye attempts to focus and direct both of these rays on a single spot on the retina. The required distortion of the lens in the eye is a measurement of the divergence angle of these two rays and amounts to a triangulation -- a distance measurement.

It is hard to do the required calculations. Way harder than could be expected of the student solving this exercise. Way way harder. Way harder than I am willing to attempt here. Suffice it to say that it is doable. One could carry out a calculation and figure out the distance to the intersection point where the two arriving rays would have originated if there were no water. All things being equal, this would be the position of the virtual image of the coin.

Now let us switch to the horizontal plane. We are looking from above. We do the ray tracing and trace rays going from the coin to the right edge of the pupil and to the left edge of the pupil. Again, the lens of the eye (we hope) causes both rays to converge on a single point on the retina. Again, we can can see that this amounts to a triangulation. Another distance measurement.

This time the required calculations are not hard. They are easy. Dead simple in fact.

The two distance measurements give two different results. We have aberration.

Trust me on this, I can control both aspects of my vision somewhat independently. It is amusing to watch through one's eyes as the lens goes through autofocus and acquires an image at a different focal depth than binocular vision calls for. In normal operation, binocular vision and autofocus are strongly coordinated and binocular vision is highly constrained to face-relative horizontal. It takes practice to de-couple them. However, for some people (like my wife) the decoupling is involuntary and can manifest as strabismus or amblyopia, so one may wish to exercise due care before staring into a pegboard wall working to mis-train ones only set of eyes.


We have seen above that distance triangulation in the horizontal plane is accurate. So we can return to the original problem. We have an assumed accurate horizontal distance estimate which we accepting as a given in order attempt a vertical distance estimation: How deep is the virtual image, given that its horizontal distance is as specified. The required calculation is simple and is what the exercise asks for.
Last edited: Jun 26, 2022
sophiecentaur
Science Advisor
Gold Member

jaumzaum said:
But it's not obvious to me why it would also "think" that the image is in the same vertical line as the real object.

This a totally valid objection. If you try to harpoon a fish from the river bank you will certainly miss if you assume the fish is in the same horizontal position. Look at a long stick, half immersed and it appears bent; if that were the harpoon, you can see that the dry part is not pointing where the sharp end is.
I think you always need to be careful of over-simple diagrams in elementary Science books. However, imagine you are looking vertically downwards with both eyes. Both images will (as usual) be in slightly different directions. Your brain takes the stereoscopic images and estimates a definitely reduced apparent depth but no apparent change in horizontal position.
sophiecentaur
Science Advisor
Gold Member

jbriggs444 said:
Trust me on this, I can control both aspects of my vision somewhat independently.

Is there a chameleon somewhere in your family past?

But your condition is not so rare. I had a pal who used to have independent eye control and one of my daughters in law managed to completely flummox a research student with her abilities to choose a dominant eye. She can go binocular when she wants. She had strabismus problems as a child but she became aware of what was going wrong and learned to correct it somewhat. Also, she's had two or three sessions of surgery which allow her to 'look' ok until she gets tired.
Share:
Share

Apparent depth when two or more refracting surfaces are present

I What does a "phase reversal" really do?

I An idea involving polarised light and photography -- can what I suggest work?

In optics what do Tp and Ts stand for and what are they?

B What does "1 diopter of astigmatism" mean?

What is the physical dimension of transduction coefficient in photonics?

What if the speed of light were not constant?