Are objects moving relative to each other? 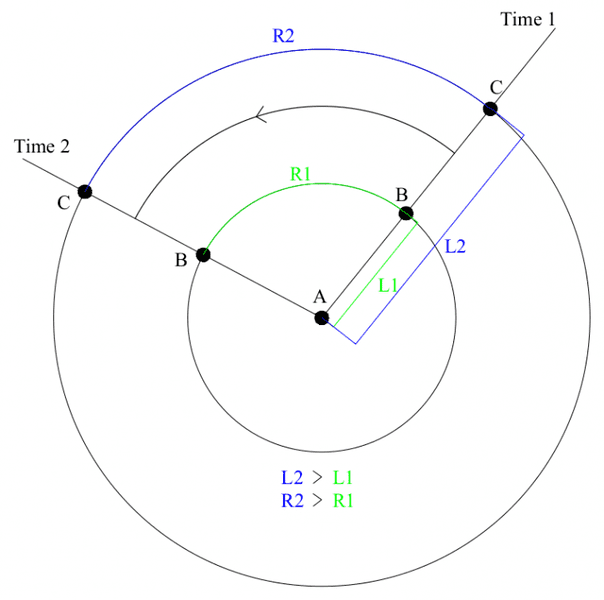 Azaravicius said:
Are clocks A, B and C stationary relative to each other or not?

Clearly not. Or do you think the moon is stationary with respect to the Earth?

No they won't, because all of the clocks are in relative motion.

I advise not trying to think about rotational motion in relativity until you are confident with linear motion. The complexities of rotating reference frames are a large part of what lead Einstein to develop General Relativity, which is a whole order of mathematical complexity worse than Special Relativity.
Azaravicius

Ibix said:
Clearly not. Or do you think the moon is stationary with respect to the Earth?
No they won't, because all of the clocks are in relative motion.

Typically, "not moving" means at rest in an inertial frame of reference, and there is no inertial frame of reference in which all of the objects are at rest. However, you make a fair point that you can adopt a rotating frame of reference in which you are not moving. But the price of doing so is the emergence of so-called "fictitious forces" such as centrifugal force and, in relativity, serious complications related to clock synchronisation. Generally, you'd consider someone "at rest in a rotating frame" to be moving because they themselves can detect the acceleration even if they were shut in a box.


Azaravicius said:
Well, point A can be earth. Point B are me in first floor of building and point C is my friend in tenth floor of building. Earth rotates around it's axis, so we move in circular rotation around earth, but at different distances from earth axis.

Earth is big enough and moves slowly enough that you can largely treat yourself as standing on a Euclidean plane at rest in an inertial reference frame. That's why you can treat your friend as stationary without worrying yourself about details. But if you make sufficiently precise (or sufficiently large scale) measurements, you'll be able to see effects from the fact that you are approximating. Notably, hurricanes.

It depends what you mean by "moving", basically. When you say that you and your friend aren't moving you are implicitly adopting a rotating frame of reference. If one adopts a non-rotating frame then you are both moving at different speeds. See my first paragraph.

Rotating frames have a lot of complications compared to inertial frames. For example, clocks at relative rest in an inertial frame tick at the same rate. Clocks at rest in a rotating frame tick slower the further from the axis they are - and you can't even be at rest when you are far enough from the axis that "at rest in the rotating frame" means "moving at or above light speed in an inertial frame". And clock synchronisation is a complicated topic. All this is why I suggest getting to grips with linear motion first.
Azaravicius

Related Threads on Are objects moving relative to each other?

Two objects moving towards each other.

Velocities of objects moving towards and away from each other

I Two observers moving in opposite directions relative to each other

If two spaceships are moving toward each other at the 0,9c

Objects accellerating due to each other's gravity

I What happens to local clock when many observers are moving wrt each other?

If everything is relative to each other in this universe

Apparent contradiction: Two charges moving parallel to each other