Are there standard axes/orientations for Rubik's Cube game programs?

I did a PF search to try to see if this was discussed before, and didn't find what I was wanting to ask about (I could have missed it).

I'm writing a Rubik's Cube game C/C# program for fun (starting with a console app and working up through various GUI options). I'd like to use a standard axis representation of the Rubik's cube if it exists already. If it doesn't exist already, I'll just define my own and proceed on.

Does anybody know of any existing standards? The two images below seem to be pretty common (and they look consistent to me). They would imply that I could define the starting x-y-z planes as G-R-Y, with the origin in the corner of the GRY sub-cube. does that seem like a standard starting origin?

Also, are all Rubik's Cubes manufactured with the same initial starting position, or can you buy different new Rubik's Cubes with the colors on different sides? No big deal for my programming exercise, but I'm just curious. Maybe there is a Rubik's Cube Standards Body that I don't know about yet.

Finally, can anybody recommend a good quality Rubik's cube for me to buy to play with along with my program? I've owned cheap plastic Rubik's Cubes in the past, and they were very frustrating to work with (very sticky and imprecise in their action). If there were a version with metal bearings, I'd be willing to pay for that (up to a point, of course). I think I've looked through the Amazon offerings in the past, and they all looked like cheap plastic versions.

EDIT -- Because of a strange forum glitch, there is another image attached at the bottom of my ost. The color oredr appears to be different in that image, but I'm not sure... 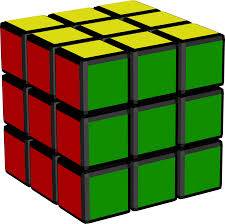 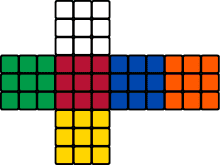 I found this while searching for Rubik’s cube notation

That's awesome jedi, thanks! I had made up my own notation (+/- x, y, z), but am open to using anything that is more standard in the game community (or using both to learn more). Thanks.
berkeman
Mentor

BTW, I enjoy playing chess, and I use standard move notation for recording my moves. Something analogous may exist for Rubik's Cubes, like in jedi's link...
anorlunda
Staff Emeritus
Insights Author

What fun. It was 40 years ago that I learned to solve the cube. It attracted attention from stewardess on planes. Then I discovered Collosal Cave Adventure and the cube was forgotten.
jedishrfu
Mentor
Insights Author

I never solved the Rubik’s cube. Not smart enough to figure it out from scratch.

However, I did solve the instant insanity cubes using a tree diagram and a rule to decide whether a given branch was valid. The rule was simple you couldn’t have more than two of any color along any path. In the end there were two possible solutions one of which was correct and other was not.

Each node of my tree were a color pair of opposite sides. It really amazed my friends who had no idea what I was doing on the paper.

As I think about it now. It would have been even more magically cool if I had lined up the cubes and rotated them in a kind of counting fashion until I found the solution but alas I just wasn’t up to the task.
jedishrfu
Mentor
Insights Author

Perhaps you could built a software version which accepted the standard notation and correctly adjusted the displayed cube.

Also your two cube diagrams look compatible if you rotate the bottom one anti clockwise by 90 degrees.
rcgldr
Homework Helper

I initially learned how to solve the Rubik's cube by noting the results of a move sequence, then taking it apart and putting it back together solved. My initial method was to solve the corners, then top, middle, bottom edges, but it turned out to be quicker to solve top and bottom edges, then the middle edges, although one of the sequences to swap two opposite edge pieces is a bit longer, which was called Rubik's maneuver.

This article starts off using down slices, but the original Rubik's maneuver started with up slices, and finished with down slices. The result is the same though.

The 4x4x4 version centers are not fixed. It's easier to place the top and bottom center pieces early on, just before or just after solving corners (they're independent, so the order doesn't matter). The edge pieces need to be paired up after which 3x3x3 moves can be used to solve them. With the 4x4x4, it's possible to end up with a flipped pair of edges (a flipped edge is not possible with 3x3x3, unless it's taken apart and put back together "wrong"). Fixing this is a somewhat lengthy sequence but fortunately you have visual cues for where you are in the process so it doesn't have to be fully memorized. The 1st and 2nd generation 4x4x4 internals includes a sphere with slots that the "legs" of the center pieces hook into. The 3rd generation is a bit different.

Speed cubers memorize patterns well enough that they don't need to see the cube state during intermediate steps, so they tend to solve one plane and then turn that plane away from them so that they only see the unsolved part of the cube. I'm only aware of "speed" versions of the 3x3x3 (a small amount of petroleum jelly or silicone spray can be used on the original Rubik's 3x3x3 cubes for speed) . The locking mechanism for the 3x3x3 pieces is fairly strong, while the internal locking for 4x4x4 and 5x5x5 cubes is not quite as strong and they tend to "snag" mid turn if not precisely lined up, so they're not good for speed solving. Computerized virtual cubes of any size can be "speed" solved, but most of the speed solving targets the 3x3x3.
Last edited: Nov 9, 2017
jedishrfu
Mentor
Insights Author

You also need some video encouragement


And this one from penn and teller fool us

And this solution video


Where the commentator discusses the rotations for the bag trick and the importance of cube orientation via the center color squares ie green face, blue face, white face...
rcgldr
Homework Helper

My wife watched that show on DVR and I looked at the Rubik's cube sequence. I figured out the "exposed" part where 1/2 the cube was solved at 3:20 into the original video. I wasn't sure about the rest of the tricks. For the puzzle handed to Simon to mix up, it's possible that there was a 3rd cube in the bag already mixed up identically to the 4th cube that the guy shows and that the 2nd cube that Simon mixed up is never shown again after it's put into the bag.
Last edited: Nov 8, 2017
rcgldr
Homework Helper

If interested here are videos of the internals. There are a few variations for 4x4x4 or larger cubes.

berkeman said:
Finally, can anybody recommend a good quality Rubik's cube for me to buy to play with along with my program? I've owned cheap plastic Rubik's Cubes in the past, and they were very frustrating to work with (very sticky and imprecise in their action). If there were a version with metal bearings, I'd be willing to pay for that (up to a point, of course). I think I've looked through the Amazon offerings in the past, and they all looked like cheap plastic versions.

Thanks for the great responses folks. Very helpful and useful.

I'd still like to buy a high-quality 3x3 Rubik's cube to use as I develop my program and work on learning how to solve the cube. I'd be willing to pay up to about $50 at Amazon if you have a good experience with a version of the cube. I'm guessing it should be made of light metal with metal ball bearings. OTOH, what do they use in Rubik's Cube tournaments? Those must be pretty easy to work with...
jedishrfu
Mentor
Insights Author

Related Threads on Are there standard axes/orientations for Rubik's Cube game programs?

Are there Standardized Computer Symbols for these Science Fields?

Writing a program to play this game?