BBC 4 Experiment on the Spreading of a Pandemic

BBC 4 with the help of a smart app tracks the spread of a theoretical pandemic:

There's an older 2011 movie called Contagion that is a kind of docu-drama with Matt Damon, Laurence Fishburne and Jude Law that covers what could happen in a real event.

I particularly liked the touch at the end where it tracks destruction of a forested environment to an infected bat dropping fruit into a pig stye. The pig is then slaughtered by a cook who doesn't use the proper hand washing procedures and begins the infection. Of course, we will never really know how a plague comes to be with that detail it is very plausible and shows the importance of everyone being educated in health protocols as the very first line of defense.
Laroxe
Science Advisor

While this is interesting, I don't see how this could really be very useful, the spread of infection isn't simply a matter of contacts there are all sorts of things that effect it, every disease behaves differently and even in a single disease like flu, not only are their differences in the different flu viruses but the virus itself changes as it spreads into the human population. A totally new strain would over time optimise itself to its new host often becoming better at spreading and perhaps more virulent then over time prolonging its incubation period and modifying its virulence to enhance its ability to spread. This means the spread would not in fact have a very predictable pattern and any figures we get will have very wide margins of error, even the real world example from 1918 will have very limited predictive value. Its interesting that diseases like Ebola are so deadly they actually interfere with their own survival, they don't give their victims time to effectively spread the virus. However even in the short time we have known of its existence there is already evidence that more people are surviving the infection and this in fact is a bit worrying, the HIV virus also appears to have undergone significant changes and for many bacterial infectious diseases we still don't even understand what drives epidemics.
jedishrfu
Mentor
Insights Author

It's a good step in the right direction. It allows the medical community to understand who the superspreaders are and to then get them vaccinated first.

Of course, diseases mutate and transform into new pathogens as they migrate through a population. The researchers could emulate that behavior too with the data they've collected and see how it could be properly detected and stopped.

We are in a fight against the forces of nature and we must use all our skills to understand and survive these types of attacks and I think this app and social experiment is one more weapon in our arsenal,

Perhaps the next step will be an app on all phones that can determine if you've been infected by your behavior, life readings or by you entering in symptoms as requested. However, to many that smacks of invasion of privacy, so it won't happen until a crisis comes and privacy concerns are side-lined in the interest of public health.

There are already a number of quite sophisticated models in use to predict flu activity which cover a number of variables in real time and google also tracks searches linked to flu to provide real time estimates. Working with real time data already provides far more accurate prediction than using historical data about the behaviour and spread of the disease. This won't really tell us anything we don't know
In this “experiment” they are not actually tracking anything its simply looking at person contact among smart phone users, the people known to be most at risk of dying or spreading the infection, the very young and the very old are the least likely to be involved. It also provides no specific behaviour about the behaviour of that particular bug. It might make an interesting TV program, but the systems already in place are already far more informative. Governments are well aware of the risks from disease and flu being so common and prone remixing its genes is a prime candidate for pandemics, we put a great deal of resources into monitoring it. Many countries still have laws in place to quarantine people perceived as a risk to public health but the phone idea couldn't work for a whole range of reasons and we still can't even get healthcare providers to get vaccinated.
There are a few articles on medical express which discuss these and even compare a number of different approaches, this one has links to others at the bottom. You might have to register for free to get access (sorry).

Laroxe said:
There are already a number of quite sophisticated models in use to predict flu activity which cover a number of variables in real time and google also tracks searches linked to flu to provide real time estimates. Working with real time data already provides far more accurate prediction than using historical data about the behaviour and spread of the disease.

Actually, while Google was able to detect patterns in their data relating flu searches to actual flu cases, these correlations did not hold in subsequent years, suggesting their approach was subject to spurious correlations and overfitting. The parable of Google flu is now used as an example of how "big data" approaches can go wrong:

I think we are talking abut different things here so I’ll leave it at that.

The BBC model also helped educate the public in a way that the scientific models do not and for that reason alone it’s a worthwhile endeavor.

Also thanks for the medical express link. It too was an interesting read.
mfb
Mentor
Insights Author

Laroxe said:
This won't really tell us anything we don't know

The scientists and the people funding them know what they can learn from it, even if you are unaware of it.

Laroxe said:
In this “experiment” they are not actually tracking anything its simply looking at person contact among smart phone users

They do so by tracking.
OCR 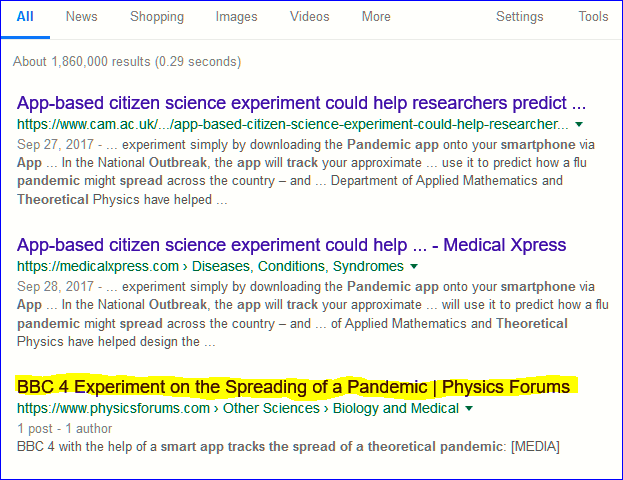 I'm not saying it shouldn't be done and indeed it may be educational and even interesting. I am aware of the problems with the google approach but this particular experiment will be using a group of people who can be bothered to download an app that allows them to be tracked and appears to serve no other function. I think this represents a sample of the population that would be even less representative than the data used by Google.
Its true that I don't know what they expect to learn from it, that's exactly what I'm saying, but if the major funding source is the BBC, I expect they expect to get a program out of it and generating discussions about the health benefits is useful advertising. There is nothing wrong with that, its a media company and I expect there may be useful spin off's in education about flu. I simply don't see how this will add much to the already massive amount of information we have about how flu "works" in a population when its unlikely that their sample will represent anything like the actual population, will under estimate the effects of high risk groups and the study can't account for the behaviour of the organism involved.
Personally I will find the details about the number of downloads more interesting as it will represent a very specific group of users, with little concern about surveillance and security. I expect that the majority will be in the UK, it is the BBC after all, so I don't see how they will be able to model a pandemic, they won't even be able to model a likely source or how it gets into the UK.
I simply don't think it will tell us much about flu. I might be wrong and it would be nice if I was really, but nothing I've seen so far makes me think it goes much beyond the usual and ever popular appeals to alarmism, maybe I'm just an old cynic.
jedishrfu
Mentor
Insights Author

Actually that's quite a good point about some folks choosing not to use the app because they didn't want to be tracked.

I wonder if they collected stats of other phones passing by a phone with the app or if that's even possible ie would Apple/Google allow an app to do that. It would be kind of like wardriving for phones.

Suggested for: BBC 4 Experiment on the Spreading of a Pandemic

BBC - Our eyes can change colour in surprising ways

Reporting on the BBC on molar agenesis in modern humans?

Recent Article on the Evolution of a Theory of Covid Origins

Policy for pandemic issues and how models shape it
2