Can we design vehicle for animal self powered?

Greeting. This is my first thread in engineering zone. Pleased to meet you all

As the topic said. I want to ask about how possible to make animal powered vehicle for animal
Or simply said, can we create bicycle for animal?

I just think that, Human walk is low efficient compare to bicycle. Even bicycle add weight into overall system. Using bicycle is faster and consume less energy than running

So, can we give animal the same kind of system? Some wheels connected to gear and.... Pedal? Threadmill? whatever. Anything and everything that can boost harness power efficiency and lower fatigue of animal

I want to find some way to let human able to use animal powered engine instead of fuel. But just using direct drafting like the old day is not enough anymore. Boosting efficiency with mechanical engineering is my hope
Do you have any idea?
Thank you 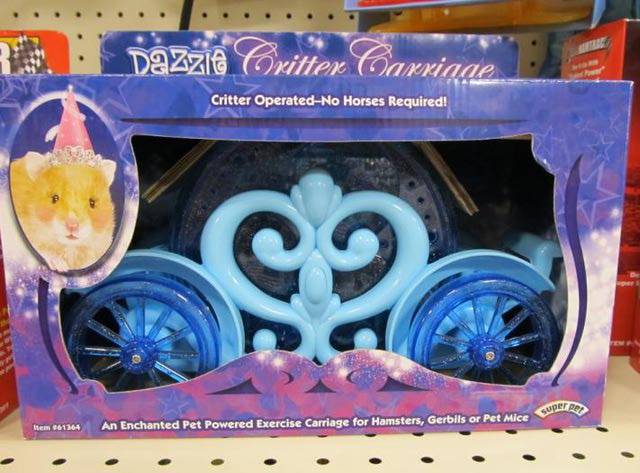 Thank you. That seem promising but are there any really workable design for working animal?
Danger
Gold Member

I hope you realize that no matter how efficiently you get the little buggers pedaling, their steering will be atrocious.
ThainaYu

Yesterday I have though the simple design maybe.... The treadmill that slope and power rear wheels. The steering would be front wheels like normal car

Maybe design it like side bike. The steering is controlled by human. Just harness the power of animal

Also if we can train. Howabout... if animal tilt its body then it turn that way? Something auto calculate the center of gravity like Honda electric unicycle?
Danger
Gold Member

With the state of computer systems and control equipment, I suppose that anything is possible as far as the animal driving and steering the vehicle goes. What I do not understand, however, is how you plan to steer the animal.
ThainaYu

Animal was on stand on the vehicle. And steering with the same as car steering system. Just take engine out and use animal walk on treadmill to power rear wheel instead

If we let animal ride this vehicle by themselves. Maybe train them to use it like we train ourselves to use bicycle
If we want to control vehicle. Then it would be another model that we sit on the side of treadmill and use normal steering wheel
Animal would stand on vehicle. Not touch the ground. Just harness their power
So what is the problem of steering?
Travis_King

How would a treadmill add any efficiency to the system?

Not to mention why you'd want to do this... Even if you somehow got an animal to use a device that made better use of their mechanical energy (which I highly doubt is possible or practical), the gains made in efficiency would be ridiculously overshadowed by the costs due to the complexity of the system as compared to having the animal simply tow you with its feet on the ground. I'm not saying give up, but maybe take a step back for a moment and reanalyze the problem.
ThainaYu

I just guess that if we can add wheel to animal it would be more efficient to harness
But to add wheel directly would be too hard to control. So the treadmill is just medium, like human use pedal for bicycle, not pushing the ground by foot
Using treadmill would decrease efficient a bit but it would be more convenient to draw the power from animal to wheel. Which wheel and freewheel would increase efficiency in return. It could also add gear and other utility for decrease animal fatigue and strain

As I said at start. I guess it from the fact that we human use bicycle as the most efficient tool in traveling. Pedaling also able to harness human power for many mechanical task like grinding. Compare to working animal we use treadmill for the same engine

But I really don't have solid idea. Treadmill is just something come up to my mind. It can be anything that could increase overall efficiency than direct drafting
Averagesupernova
Science Advisor
Gold Member

Dogs have been trained to run on treadmills to do tasks. I believe laundry.
-
As far as training the animal goes, I doubt it is possible. It is VERY possible to train them with a driver, but I doubt you could stick a dog in a self powered vehicle and say: "Ok Fido, go get the mail."
-
I have seen videos of a dog riding a skateboard and navigate corners very well. But it was all down hill.
Hercuflea 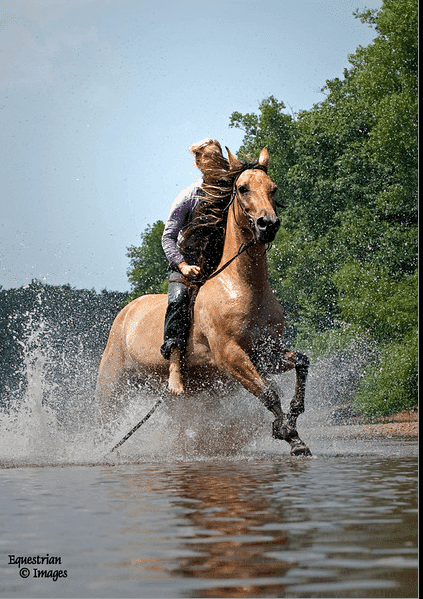 One thought would be to have a wheeled supporting cart that fits under a horse and supports 50-75% of their body weight. As long as there was enough traction between their hooves and the road to be able to propel the horse and rider forward, the unweighting would make walking and trotting easier on the horse. The horse might even be able to be trained to "glide" by lifting its hooves off the road after getting to speed on the flats, or on downhills. The rider would control the steering and braking of the supporting cart.

Wonder what the horse would think of that -- no idea if it could be made comfortable for them. This would probably only work on smooth roads (maybe smooth dirt roads too...).
Danger
Gold Member

ThainaYu said:
the fact that we human use bicycle as the most efficient tool in traveling.

But you have to have built up momentum in order to coast, at a mechanical loss.
etudiant
Gold Member

Bicycling is much more efficient than walking on a joule/km basis.
The catch is that it requires a reasonably level surface, whereas walking is much more flexible.
The power wasted in walking gets captured for forward motion by the bike.

The OPs idea is an interesting one and entirely feasible.
Here in NYC, many people walk aging pets with paralyzed hindquarters that are supported by a wheeled frame.
The concept could surely be extended to the entire animal, in line with berkeman's idea. Steering would work by flexing the carrier vehicle.
Horses are more difficult, they might have trouble breathing properly while suspended from a carrier.
Still, it would perhaps allow for much faster horses, just as bikes enable much faster humans.
Danger
Gold Member

etudiant said:
The catch is that it requires a reasonably level surface, whereas walking is much more flexible.

I guess that therein lies the basis of my disagreement. I live in the foothills of the Rocky Mountains. There's no such thing as a level surface. Two of the hills leading to and from my town are 8% grades, and the third is 6%. One east-west road is fairly flat, but has a southward slope.
etudiant
Gold Member

Danger said:
I guess that therein lies the basis of my disagreement. I live in the foothills of the Rocky Mountains. There's no such thing as a level surface. Two of the hills leading to and from my town are 8% grades, and the third is 6%. One east-west road is fairly flat, but has a southward slope.

My mistake, I meant even rather than level.
Biking preserves momentum much better than walking does. That saves energy.
The calorie burn for walking is about three times that used for biking, according to this:
http://www.worldwatch.org/node/4057
ThainaYu

Walking loses more mechanical. You build energy and lose most from break of foot touch the ground. The momentum you gain from pushing forward is just near half. Compare to pedaling and gear it loses too but less than walk

At least the kick scooter is more efficient than walk. Because the wheel draw power that normally lose from walk

All I can say with efficiency concerning biking vs. walking is how far do you think you can walk in a day compared to how far you can bike?
nitsuj

Averagesupernova said:
All I can say with efficiency concerning biking vs. walking is how far do you think you can walk in a day compared to how far you can bike?

The only additional benefit to cycling over walking that I can see is gravitational potential. letting my weight propel the bike forward, or rolling down hill.

nitsuj said:
The only additional benefit to cycling over walking that I can see is gravitational potential. letting my weight propel the bike forward, or rolling down hill.

Averagesupernova said:
Are you able to walk 75 miles in a 10 hour day?

That is your retort speaking to the comparable efficiency of a bike over walking?

well then, no I can't walk 7.5 miles an hour since my kickers are only little, must mean the bike is more efficient....or is it more effective. Shoot! now I forget/

There is no question a bike is more effective at getting from a to b compared to walking.
Last edited: Jun 12, 2013
Averagesupernova
Science Advisor
Gold Member

Depends on how fast you ride the bike. Aerobic respiration is more efficient than anaerobic, around 16x more efficient, so if your ride is full of tough sections it probably will take less energy to walk.
Log in or register to reply now!

Related Threads on Can we design vehicle for animal self powered?

Why Was the DCSS/ICPS Designed This Way (launch vehicle)?

Ways of powering vehicle that is not electricty or combustion.

How can I figure Crush on a vehicle accident?