Attempt at solution:
So I said:

Now I had the idea of making the times equal,

From here I am stuck I tryed subtracting the times, but could get any further. Help from this point would be awesome.

I have done a little diagram attached 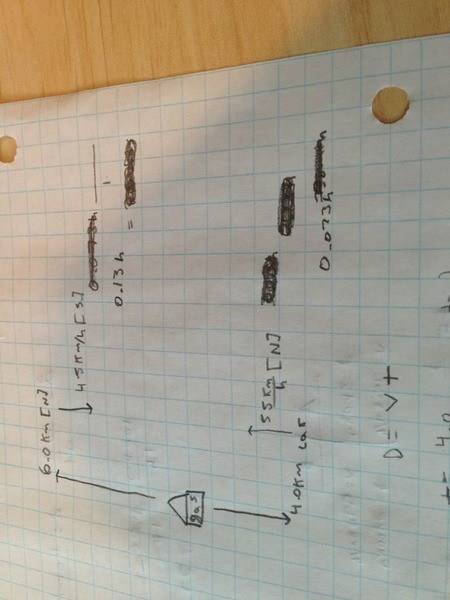 You calculated the time difference as seen at the gas station. This is not relevant for the task here.
Can you express their position as function of time?
vicsic

Would that be t=d/v=d/v??
mfb
Mentor
Insights Author

That would be the time to travel some specific distance.
No, what I mean is an equation of the type x(t)=....
You plug in the time t, and get the position x (relative to the gas station) at that time t.
vicsic

There is no change in v.

Can you find similar equations for your vehicles?
Afterwards: What means "passing" for their positions?
Log in or register to reply now!

Velocity Problem Regarding a Car Overtaking a Truck

A car and a truck

Truck and car collide, calculate magnitude of force on car from the truck

Problem with a car and a truck

I'm LOST Car is suppose to overtake truck but at what velocity?