good day to everyone,

i wish to ask what chemical in our enviroment asorb some energy from sun?

and what it has to do with high C02 level in the atmosphere?

All chemicals in the environment absorb some energy from the sun.

I assume you are referring to the greenhouse effect.

The Earth receives an enormous amount of solar radiation. Just above the atmosphere, the solar power flux density averages about 1366 watts per square meter, or 1.740×1017 W over the entire Earth. This figure vastly exceeds the power generated by human activities.
The solar power hitting Earth is balanced over time by a roughly equal amount of power radiating from the Earth (as the amount of energy from the Sun that is stored is small). Almost all radiation leaving the Earth takes two forms: reflected solar radiation and thermal blackbody radiation.

The remaining 70% of the incoming solar radiation is absorbed: 16% by the atmosphere (including the almost complete absorption of shortwave ultraviolet over most areas by the stratospheric ozone layer); 3% by clouds; and 51% by the land and oceans. This absorbed energy heats the atmosphere, oceans, land and powers life on the planet.
Like the Sun, the Earth is a thermal blackbody radiator. So because the Earth's surface is much cooler than the Sun (287 K vs 5780 K), Wien's displacement law dictates that Earth must radiate its thermal energy at much longer wavelengths than the Sun. While the Sun's radiation peaks at a visible wavelength of 500 nanometers, Earth's radiation peak is in the longwave (far) infrared at about 10 micrometres.

Because the atmosphere is such a good absorber of longwave infrared, it effectively forms a one-way blanket over Earth's surface. Visible and near-visible radiation from the Sun easily gets through, but thermal radiation from the surface can't easily get back out. In response, Earth's surface warms up. The power of the surface radiation increases by the Stefan-Boltzmann law until it (over time) compensates for the atmospheric absorption.

The surface of the Earth is in constant flux with daily, yearly, and ages long cycles and trends in temperature and other variables from a variety of causes.

The result of the greenhouse effect is that average surface temperatures are considerably higher than they would otherwise be if the Earth's surface temperature were determined solely by the albedo and blackbody properties of the surface.

It is commonplace for simplistic descriptions of the "greenhouse" effect to assert that the same mechanism warms greenhouses, but this is an incorrect oversimplification.

What country are you from?
dand5

All chemicals in the environment absorb some energy from the sun.

True, but generally speaking the atmosphere is relatively transparent to incoming solar radiation (which falls mostly in the UV to visible range). Though, some chemicals such as ozone (0_3), certain aerosols, certain hydrocarbons absorb/scatter efficiently over certain bands, most shortwave radiation travels through the atmosphere unaltered until it reaches the surface. The exception being on cloudy days since clouds tend to scatter and reflect throughout most of the solar spectrum (that is why they look white).
Mk

scorpio_wan1945 said:
i wish to ask what chemical in our enviroment asorb some energy from sun?

Also, this is a nice graph.
http://www.mwnx.net/users/mac/absorbspec.gif [Broken]
Last edited by a moderator: May 2, 2017
heavennyc

Previously, we had assumed a simplified model of Earth; one in which our planet had not atmosphere. This allowed us to examine the basic effects of albedo, latitude, and seasons on our planet's overall average temperature. We'll now add the atmosphere into our figuring; this will complicate matters, but will also make our model more realistic. We will just take a basic look at the atmosphere's influence on incoming solar radiation; we won't discuss winds and circulation patterns at this point. 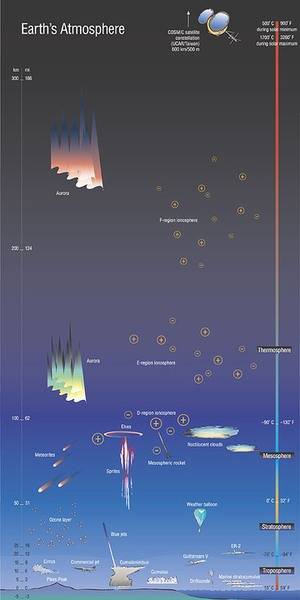 http://www.heavennyc.com
Last edited by a moderator: Apr 24, 2017
Log in or register to reply now!

CO2 Variance in the Atmosphere

Detecting CO2 in the atmosphere

Will the atmosphere run out of CO2?

Can CO2 in the Earth's atmosphere sublimate into a solid?

Atmospheric absorbance of CO2 and impact of increaseing concentration

CO2 and the correlation with rising atmospheric temperatures
2