Here is a diagram to help understand what I'm talking about: 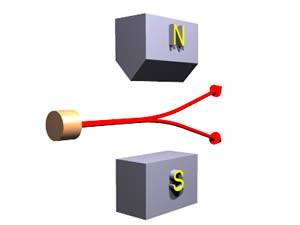 My textbook had a similar diagram that depicted the beam traveling between the two magnets as hydrogen atoms. Here is how my textbook describes it:

"When a beam of atoms that have one or more lone electrons passes through a nonuniform magnetic field (created by magnet faces with different shapes), it splits into two beams. Each electron behaves like a spinning charge and generates a tiny magnetic field, which can have one of two values of spin. The two electron fields have opposing directions, so half of the electrons are attracted by the large external magnetic field while the other half are repelled by it."

The electrons remain bound to the corresponding nuclei. The experiment does not work with free electrons as the deflection due to Lorentz forces would outweight the spin effect.
To the last question: Some electrons will show a z-component (assuming that the magnetic field is in the z-direction) of + or - 1/2. Spin is a vector, so it can orient differently with respect to an external field.
Share:
Share