Hi and welcome to PF.
From the picture it seems that their definition involves whether or not real rays of light actually pass through the object or image. A virtual object or image is just a way of describing what's happening to the light because neither can have any effect in itself. A real object actually has light coming from it and a real image actually has light actually passing through it. This is why people say that you can't project a virtual image.
A word of caution about this common worry about naming things. The terms real and virtual in this respect are only crude classifications, beloved of old fashioned ,rote teaching and don't have a lot to do with understanding how to predict how an actual optical system will perform. I can't imagine any worth while test or exam would demand that you use the 'correct' term. More important would be to predict where the image is formed.
A 'virtual Object' will have been formed by another optical element further up the chain which will have formed a virtual Image (the same virtual thing with two different names)
ninhhtt 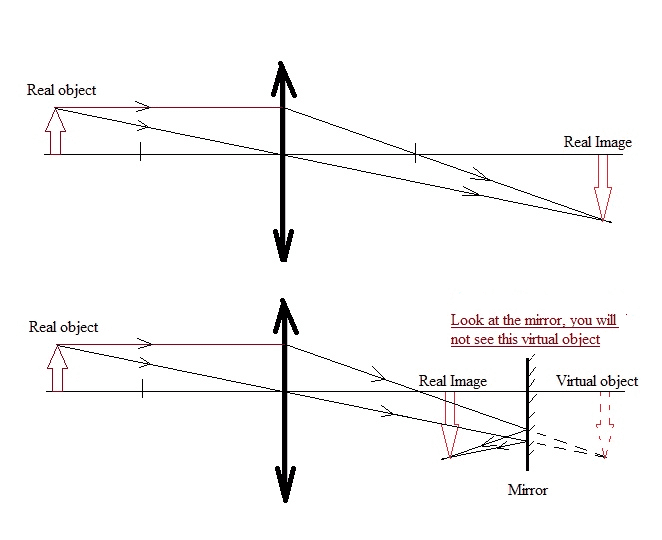 Ravik Rocha said:
I would like to know the difference between real and virtual objects. I need some examples.

Consider, for example, the Galilean telescope which contains two lenses. Its objective lens has a real object. Its eyepiece, which is a concave lens, has a virtual object.
Jyoti

A real object is one which is practically present in front of an Optical Instrument.

Suppose you have two mirrors. You place an object in front of one mirror. The mirror will produce an image and this image can be made incident on the other mirror. For the other mirror, thus image is virtual object.

you may visit cbse class10 video for more understanding on https://www.youtube.com/channel/UCPiuJvuyMVFSwcIdBCTpTyQ
spareine

Jyoti said:
Suppose you have two mirrors. You place an object in front of one mirror. The mirror will produce an image and this image can be made incident on the other mirror. For the other mirror, thus image is virtual object.

Related Threads on Difference between real and virtual objects? (optics)

L
Difference between optical and geometrical length in optical path

I Applications of Virtual objects

0
Image of a virtual object by a plane mirror

Optics question -- Object and Image on the optical axis...