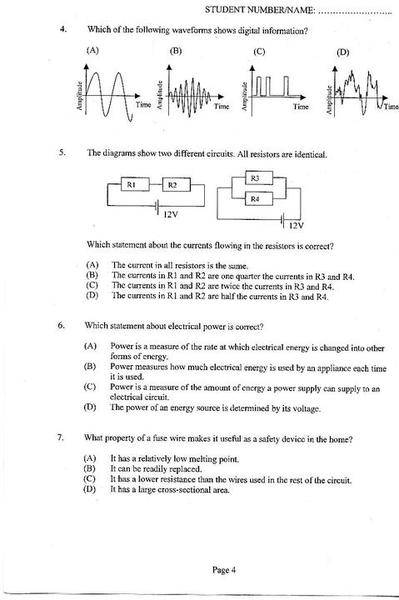 On this page, only questions 4 and 5 I need help for. For question 4, I really have no idea, and there's no real "working" that I can show to really say that I've given it a crack.

For question 5 on that page, I thought along these lines:

In series circuits, voltage changes.
In parallel circuits, current changes.
The first circuit is in series, with the second in parallel.
In the second circuit, I guess the current would be split equally across the two resistors, while in the first it would be the same in each resistor.
Therefore, I believe C is correct - however, i'm probably way off and it really needs clarification in my mind. 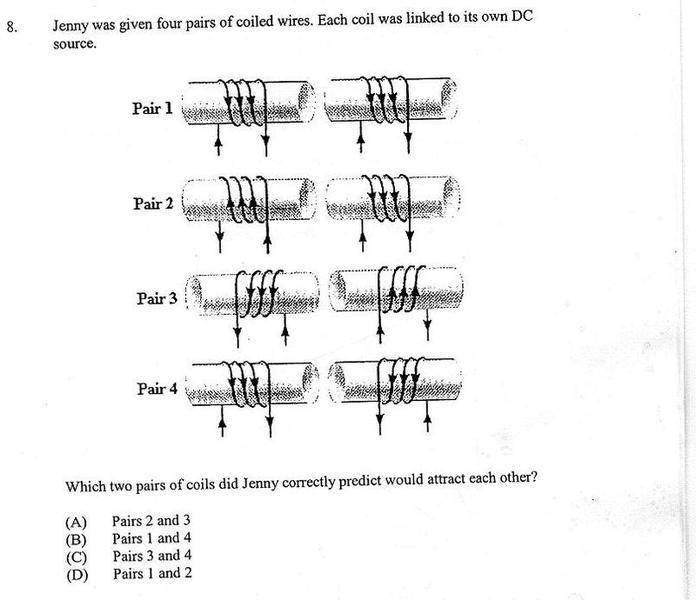 Magnetic field moves to the right in both coils, thanks to the right hand rule. Therefore they repel? Is this the correct way to go about it?

Another question I had - A sound wave is observed to change its speed, direction of travel and wavelength, but not its frequency. What can we conclude from this?

I think the wave has been refracted, but I can't find any solid proof to back my answer up.

2. This question refers to the unlabelled graph below. 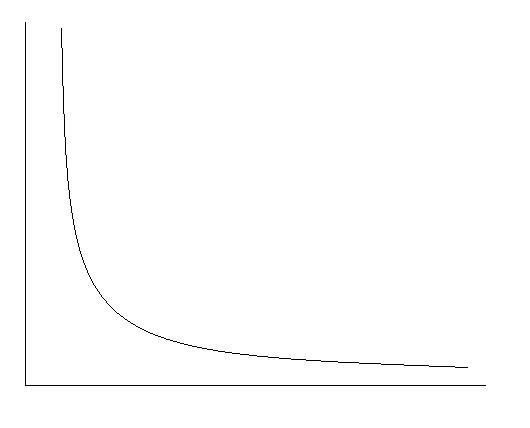 Which pair of variables, when plotted against each other, would produce a graph like this?

I'm thinking B again, frequency against wavelength, as the frequency decreases when wavelength increases, but again - i'm not sure, although I'm more certain about this than the other one.

Thanks in advance everyone. :)

#5. Let R be the resistance of one resistor. Use the formula relating voltage, current and resistance to find the current in each circuit. If you have trouble using "R", use R = 10 ohms and work it out as an example.

#8 "Each "coil" is a solenoid, hence it has a magnetic field.
You determine the direction of the magnetic field using the right hand rule (not sure on even knowing how to use the right hand rule for this)
Then, that gives the direction of the magnetic field,"
Good start! Draw the B field arrows on the diagram. Then mark N and S on the appropriate ends of each to show how it would look if it was a permanent magnet. Then you can use the fact that N and S attract, like poles repel.

Look up the characteristics of refraction. This is a good place to look if your textbook isn't handy:
http://hyperphysics.phy-astr.gsu.edu/hbase/hph.html
Also Wikipedia.

The last question/graph is a classic inverse variation as in y = k/x.
Graph y = 12/x to make one for yourself.
Check the choices to see which one has that type of formula.
Griffy11

Thanks a lot for the help Delphi! To go over what I've done now:

4) Since digital info is binary (1 or 0) I've concluded that only graph C is digital - as it only has two values - no gradual increases or decreases.

8) Glad to know I was on the right track for this one - thanks! To check:

Pair 1:
Both north poles are on the right of the solenoids = Attract.

If that's correct, then poles 1 and 2 attract, making the answer D. Is this right?

For the wave question, I couldn't find any info on the link you gave me, but thanks for that link anyway - it'll be helpful for lots of other topics! :)

After a bit more research, the best thing I could find was that "refraction is the change in direction of a wave due to a change in velocity."

As for the unlabelled graph, thanks for the formula information. The formulas that I came up with for each option are:

I've probably overlooked something, but would that mean that A is the correct answer?

Thanks a lot for all your help! :D
Delphi51
Homework Helper

Check this one again - the right and solenoid. Hold your fingers curved as if going around one of the front wires, with thumb down. That makes the field to the right inside the loops - the equivalent of a permanent magnet with the N on the right.

Refraction. Say when light goes from air into a lens. The wave slows down. And bends if it hits the glass at an angle. The frequency must stay the same so that every time a crest hits the glass, it carries on in the glass.

For the graph, you were right the first time - frequency vs wavelength because it is f = v/w. You think f = v/w rather than v = f*w because that is what means graphing f vs w. y = k/x means graphing y vs x.
v = f*w would be used to graph v vs w.
Griffy11

Thanks for the corrections on the solenoid Q8, in the end I worked out that pairs 1 and 4 attract, making the answer B. :)

Thanks again for the unlabeled graph question - looks like frequency/wavelength is it. :)

Also, was I correct in the digital waveform question? I assume since you didn't correct me on it then I was.

All correct, but that last bit about the resistors. One of the choices is for the parallel circuit to have 4 times as much current - that is the correct answer based on your 5 and 20 ohm resistances.
Griffy11

Ahh of course, thanks a lot Delphi! One last question (which I posted above a while ago) and i'll stop bugging you. ;)

A sound wave is observed to change its speed, direction of travel, and wavelength, but not its frequency. What can we conclude from this?

I think B - refracted, it seems obvious, but someone else got D, the wave was superimposed. I thought i'd just double check it.

If it just got superimposed, I don't see why it would have to change its speed, direction of travel, or wavelength (or why frequency can't change). You got the right answer: B. All of those things happen when, for example, a light ray passes from air to water at an angle less than ninety degrees.
Log in or register to reply now!

Waveform conversion of Analogue to Digital

Resistance in a Solenoid

Finding Resistance and Inductance of solenoid

Solenoid in open circuit and with glavanometer attached

Current and Voltage of Elements of a Circuit with a Solenoid.