Do carriers move across a p-n junction at 0 K?

Often a band diagram is used to explain what happens when two pieces of the same semiconductor, one p-doped, one n-doped, are put together. I am a little confused about it, so here is my question.

Initially and at ##0\mathrm{K}##, the surplus carriers should be confined to their respective acceptor and donor levels, e.g. the flatband diagram would look like follows: 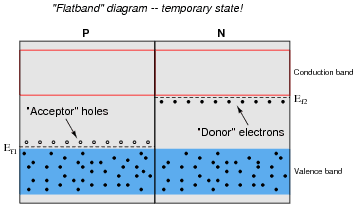 Now, there are no free carriers in the system and thus, the electrons from the donor level should not be able to recombine with the holes from the acceptor levels due to spatial detachment.

Of course, provided some temperature, the acceptor and donor carriers would ionize and free carriers would be at disposal for recombination and thus, a depletion zone would form. But at ##0K## it seems to me that this should not happen. In reality, would a depletion zone be formed anyway somehow (are there other relevant physics taking action)?

Here, I'm considering the ideal case in which ##0K## exists. Let us not go into the discussion whether it practically exists or not.

At 0 K you can't have this electron distribution. Some donor electrons at the border have to fill some of the holes until there is an equilibrium.
SongDog

Ask instead how the behavior changes as the carrier kinetic energy approaches zero: what is the limiting case?
Share:
Share

Related Threads on Do carriers move across a p-n junction at 0 K?

How does a p-n junction work?

Will absolute zero change with pressure?

Statistics of carriers in semiconductors

What happens to water at just above absolute zero degrees?

How do you make the potential zero at infinity, here

Why do bodies at rest weight more than zero?
2