Capitalism in a mixed economy world.
Chinese: Let's see, if we we put the Americans out of business, then we will make all the pie, and they will have to buy it. We will be rich.
Americans: If American companies can't compete without government help, then so be it.
Chinese: Cha-Ching!
Om: Shakes head.

So we export 685 times as much money for oil than we spend on defunct solar companies.
Seems like that could be a bit "taxing" on our economy if that keeps up.
Oh wait, it has been.

You can't compare oil vs solar panels. Most cars don't run on electricity. They run on gas. Most electricity in the US is not produced from oil. Further oil has other uses such as in making rubber, plastics and fertilizers that can't be replaced by adding electricity via solar panels.

IMO oil should be counted on its own with very little comparable to other sources of energy.
OmCheeto
Gold Member

Pfft! They are both sources of energy. They are easily compared.

Most cars don't run on electricity.

They will be when I'm finished.

They run on gas.

So old school.
Have you ever seen this image?: 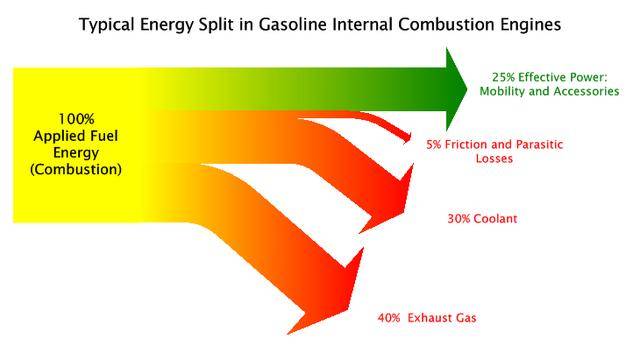 Do you know what I found out about the above graph?
25% is about the best a car can do.
In everyday urban driving, the efficiency drops to around 5%.

Most electricity in the US is not produced from oil.

Further oil has other uses such as in making rubber, plastics and fertilizers that can't be replaced by adding electricity via solar panels.

pfft! One of at least 10 reasons why I bought a Ford:


(media.ford.com)
* Ford is expanding its use of bio-based soy foam through nearly all of its vehicle lineup this year as part of an ongoing effort to use more renewable and recyclable materials
* There are more than 2 million Ford Motor Company vehicles on the road today with bio foam content; Ford’s use of bio foam has helped the company reduce its petroleum oil usage by more than 3 million pounds annually and carbon dioxide emissions by 11 million pounds

And last, but not least, this is P&WA. We shouldn't be discussing science, we should be bashing politicians!
Last edited by a moderator: May 6, 2017
ThinkToday

Dickfore said:
I am afraid the nouns and adjectives you coined up here don't make much sense for me. And my age has nothing to do with the invalidity of your argument

That’s your response to “Money is historically cheap. Borrowing is tight. You must not be old enough to remember the Carter years.”?

Seriously? At the end of the Carter presidency the Federal funds effective rate was 13.35% and the current rate is 0.1% http://www.federalreserve.gov/releases/H15/data.htm It is hard to image money any cheaper than it is now. On the other hand, a business getting credit isn't as easy http://www.slate.com/articles/business/small_business/2012/01/small_businesses_in_the_economic_recovery_the_disproportionate_impact_of_the_credit_crunch.html So, my position is entirely valid, supported by the facts, and I see no merit in your use of the term "coined up", for that matter I'm not even sure what it's supposed to mean, as you used it.
As for referencing your age, it has to do with what might be your point of reference. I think $4/gal gas is nuts, but I recall buying gas for less than 25 cents/gal. So for you, $4/gal may be high and $2.50/gal may be acceptable. My grandfather swore he'd part his truck if gas hit $0.25/gal. So, point of reference (age, in this case) matters. I don’t know. What I do know is “By this, I mean that the current interest rate for borrowing is sufficiently high, …..” isn’t supported by reference (e.g. the one I gave above) or experience.


Dickfore said:
And, finally, you show why you started this thread. It's simple Republican propaganda.

Good luck to you, Good Sir.

It has nothing to do with "Republican propaganda". You would be surprised at just how deep in Democrat party politics my family has been. Both parties have done the same things. In fact, the Republicans look to be the bigger “bailout party”, http://www.propublica.org/special/government-bailouts So let’s just step back from the party accusations, as they are just false unsubstantiated arguments that are irrelevant to the discussion. It's about the role of government and mucking around in economy on a microscopic scale by making individual loans, credit lines, etc. to companies. Clearly, one can argue the government has a role with assuring a level playing field; e.g. fair credit rules, non-discrimination, fair trade policy, safety standards, etc., but those are macroscopic things. As I said before, I can see the case for the government involvement in developing cutting edge technology that isn't within the risk/reward window that would yield private investment, such as fusion power.

Was there ever any doubt China or a similar country would provide cheaper solar panels than could be made in the US? So why would the government ever sink our tax dollars in this plant?

In looking up sources, this was surprising to me - "[We're] one of the last makers of nails in this country," company president Roelif Loveland said. About 90 percent of nails come from China and, Loveland said, if he could double sales, he could add 25 more jobs." "A box of nails is $5 more than those made in China and steel is $146 more a bundle." We can’t even make nails cheaper, and we don’t have to pay to ship them across the pacific ocean.
http://abcnews.go.com/Business/Economy/made-america-blueprint-creating-jobs/story?id=14719487

Hopefully, the government won't get into the nail business too.
Astronuc
Staff Emeritus
Science Advisor

Closed pending moderation
You must log in or register to reply here.

News Here we go with the friendly fire again
2

Does anybody here play Go?