First, let me clarify if my understanding of length contraction is correct. Is it accurate to say that relativistic velocities not only affect the measured length of an object in the direction of motion, but also the distance to the object from an observer in the direction of motion? For example, if a 1m wide object (at rest) is 100m away from an observer and travelling away at 0.87c (γ = 2.0), length contraction states that the observer will measure the object as being 0.5m wide. But, does the observer also measure the object to be 50m away, due to the fact that the measured distance gets length contracted?
If so, the following diagram is correct, no?

Anyways, if both the measured length and the measured distance become length contracted, doesn't that mean that the measured velocity becomes length contracted as well? If an object begins at an observer and travels away at 0.9999c with γ = 71, it will have traveled 0.9999 light-seconds in one second (from the observer's perspective). But, due to length contraction, it will appear to have only traveled 0.0141 light-seconds. This means it will appear to have a velocity of 0.0141c, correct? Would an object travelling at 0.9999999999c appear to travel at 0.000014c, and so on?
Taking into account the propagation of light, the observer is said to observe Terrell Rotation. In "Invisibility of the Lorentz Contraction" (1959), Terrell claims that "a Lorentz-contracted moving sphere produces a round photographic image." But, if we agree that the measured velocity of an object is length contracted as well, a ball travelling at a relativistic velocity will be measured to have a velocity far lower than it actually has. Using these assumptions, I have attempted to model the appearance of a relativistic sphere, taking into account length contraction and light propagation, and have found that the sphere appears partially contracted in the direction of motion. How can this be explained?
Finally, is the Doppler Effect affected by an object's actual velocity, or its measured velocity? Would an object travelling very near the speed of light undergo very little Doppler shift due to the fact that an observer would measure a very low velocity?

Nugatory said:
No. Only if the endpoints are moving is the distance between them length-contracted. 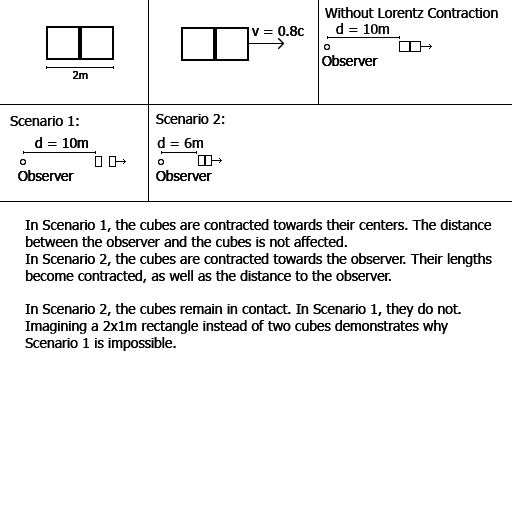 Length contraction is not about an object physically contracting. In its own rest frame, the object will appear just as usual with its normal rest length. In relation to the observer which it is moving relative to, the object is already in motion and therefore length contracted. The only question you could ask is "how did it become like that when it speeded up?" but this is then a question of how the object was accelerated which is not really a necessary condition to discuss length contraction on its own, which is just about how an object appears in a frame different from its rest frame.
taylorules

Okay, is this diagram false, then?

Suppose we have spaceship that is 100 meters long as measured by an observer who is at rest relative to the spaceship. and is moving from left to right at .6c relative to you and me (I chose these numbers to make the arithmetic easy). Because of length contraction, the spaceship is 80 meters long according tou measurements - any given time the position of the nose of the ship will be 80 meters from the position of the tail at that time.

The problem does become much more complicated interesting if you imagine the ship starting at rest relative to us and accelerating to .6c. In this case, its measured length will start at 100 meters and contract down to 80 meters as it gains speeds and then settles down at .6c. We will find that different points along the ship accelerate at different rates and that while the ship is accelerating the speed of the nose is not equal to the speed of the tail. Thus, the calculation of the position of the nose and tail and the distance between them becomes much harder than after the ship is at constant speed. However, even in this case, the distance to the position of the nose, the tail, and anywhere in between will be unaffected by length contraction - just as in classical physics, we'll calculate the position of any point on ship at time ##T## as ##s=\int^T_0 v(t)dt## where ##v(t)## is the velocity of the point in question as a function of time.

To really understand the relationship between length contraction, measured distances, and acceleration, you'll want to google for "Bell's spaceship paradox" and "Born rigid motion". Be warned that the spaceship paradox in particular has tripped up even some respected experts.
Mister T
Science Advisor
Gold Member

Suppose you had a train moving along the track at a relativistic speed. You fly by in your space ship, moving in a direction parallel to the track. You will measure both the train and the track contracted (the train more so). If instead you were standing beside the track, even if very far from the train, you would measure the train contracted, but not the track. In both cases you would determine the amount of contraction based on the speed you measure relative to you.
A.T.
Science Advisor

@taylorules Distances and time intervals in a frame of refernce are measured by rulers and clocks that are at rest in that frame, and thus not contracted or dilated. The velocity of objects in that frame is defined based on those resting rulers and clocks, so it`s also not affected in the way you suggest.
Log in or register to reply now!

B Light clock and length contraction in general relativity

I Does Length Contraction Actually Happen?

Is length contraction relative or absolute?

Perspective on Relativity and Length Contraction
9