Find an explicit formula for this n-sum problem

TL;DR Summary
Find simplified expression of multiple sums with almost same borders and depending on one given constant. Also nice looking equal-length pyramide if visualized.

In the end, I would love a direct expression that just contains the number of sums in the expression. and the a which is the low border of the outmost sum.

I know, I can painstakingly try to solve this by hand.
but after simplifying the first 2 innermost sums, I would start to need some formulas for "the sum of the first n numbers ^3,^4,^5,etc.".
which to my knowledge, closed expressions for that exist only for ^2 and ^3 at most.

So I am at a loss here but hope that some smart people hear have some ideas.
On a sidenote try to mentally imagine this picture in the 3d realm:
we place a 1x1x1 unit long block right in the "corner" next to the origin.
3 of this cube's edges touch the 3 coordinate axis.
now along each of the 3 coordinate axis', place another 49-1 blocks in a straight line.
so that you have, including the startiung block, 49 blocks next to each other in eahc of the 3 axis directions.
now fill in blocks so the whole thing is like a 3 equally sided pyramide, tilted in a way so it's top is touching the origin and the 3 edges go along the coordinate axis.
and obviously we are in minecraft so the base of the pyramide due to the blocks sticking out isnt a flat surface but a spiky wasteland.
sorry if my explanation is... bad.

but jsut imagine each.
nyways for this weirdly rotated blocky pyramide the number of blocks in it actually are exactly S(1,3) from above, so the triple sum where the outermost sum goes from a=1 to 49.
if a=5, then the pyramide will have the (top touching) 3 sides of same length=49-5+1=45. so pyramide is simply smaller but same proportions.

if we had n=2 (instead of 3) we would be in 2d instead but the concept would be the same.
same for higher dimensional rooms (at least very likely) but obviously we cant visually imagine it.

but such nice symmetry, there must be some rule to it.

and literally while writing this , the "common denominator" hit me:
say we have a=1, so pyramide lengths=49 and have n=3, so 3d.
say we put a player inside the first (origin touching) block, right in the middle (at coordinates 0.5,0.5,0.5).
and the player can only move away from the origin, one blocks width per step.
a step can be done in any of the 3 directions parallel to the coordinate axis, lets call them up, right,forward.
so the player, by doing 0-48 steps, can reach a bunch of positions. how he gets there doesnt matter.
the total number of possible positions he can reach in a maximum of 48 steps (so including doing 0 steps and therefor also counting the start position), is exactly equal to the number of blocks and therefor also S(1,3).

Now if only we can find some way to calculate the number of n-tuples where the sum of each tuple's components <=49-a, we have won.
cause that's precisely S(a,n).
If I am not completely wrong and this is all utter nonsense so far :-)

Why not write a python program to compute it using a recursion function?

1. You need another parameter for your numbers, which is the 49. So instead write S(a, n, m) where m is the number that goes where your 49s are. So all your formulas are for numbers of type S(a, n, 49)

andrewkirk said:
1. You need another parameter for your numbers, which is the 49. So instead write S(a, n, m) where m is the number that goes where your 49s are. So all your formulas are for numbers of type S(a, n, 49)

1. I can follow.
2. I will jsut accept it even though it "seems sus" to me that youc an basically let the outermost border go from 1 to (50-a) insted of a to 49 like before. But I'll just accept it for the moment.
after that, I am kind of lost.
S(r,m) still depends on n even though you havent listed it as a parameter anymore?
"r is the upper limit of each summation"
not sure what you mean there?
like, the outermost sum now goes from 1 to 50-a. and the inner ones from (outer variable) to a.
or did you mean to transform all sum borders?
3. I don't need to mention that I havent even remotely ever heard of this type of numbers, right? :-)
will look through the link and try not to totally fail at understanding anything there :-)
anuttarasammyak
Gold Member

Basically, yeah. Except in my case here, b is always 49.
but otherwise, you got the idea.
Haven't really checked your calculation there, just checked the basically recursive formula for S(a,b,n) that you described there.

Cant exactly followed how you did those calculations there.
but yeah, as you might have guessed, for like S(a,,n) with n=4 or bigger, you will inevitably coem face to face with having to solve a sum of cubed or higher potency numbers.
so 1^4+2^4+...+n^4 and such.
which might or might not even have an explicit formula.

not to mention that calculating each recursive step by hand until you reach S(a,b,n) is a huge PITA and super easy to make tiny mistakes that ruin everything :-/
berkeman
Mentor

bernd said:
3. I don't need to mention that I havent even remotely ever heard of this type of numbers, right? :-)
will look through the link and try not to totally fail at understanding anything there :-)

bernd said:
Basically, yeah. Except in my case here, b is always 49.
but otherwise, you got the idea.
Haven't really checked your calculation there, just checked the basically recursive formula for S(a,b,n) that you described there.

I am glad to know that I have gotten you. 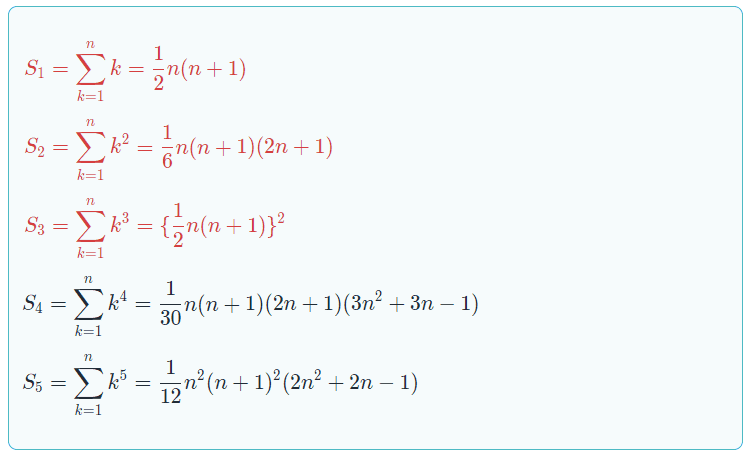 Suggested for: Find an explicit formula for this n-sum problem

A Formula for this curve?
2

I Finding a general formula for a recursive sequence

A Higher approximations of Ramanujan formula for ##\pi##

MHB Find the sum of x, y and z