First, I drew a diagram. Because the direction of the resultant is not stated, I positioned it going south. I then drew the known vector 30 degrees from the tail of the resultant. So it's tip acted 30 degrees on the tail of the resultant, as stated in the problem. I labelled that as b. Then I drew in the unknown vector, which I labelled as a. It makes an unknown angle with the resultant and has an unknown magnitude.
I tried using the cos law/sin law way of solving this, but all I could figure out is that vector a makes an angle of 60+x degrees with vector b.
I also tried solving with components. I calculated 4N and 7N for the hor. and vert. components of b, respectively and 0N and 15N for the resultant. But after this I am completely lost!

I would really appreciate some feedback just on how I have my diagram set up and maybe some tips on where to go from here, if I have anything correct! Thank you!

Yes, that is what I meant. Here is a very messy depiction of what I have: 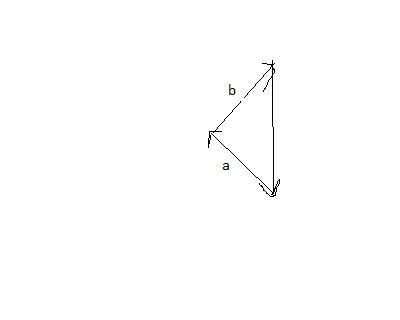 I know this is an easy problem but I'm so confused!
tiny-tim
Science Advisor
Homework Helper

deathcabislov said:
I also tried solving with components. I calculated 4N and 7N for the hor. and vert. components of b, respectively and 0N and 15N for the resultant.


show us what you did after that ​
deathcabislov


show us what you did after that ​

that would be a formula for a right-angled triangle with 15 on the hypotenuse, wouldn't it?

Ohhhhhhkay. And once I find those, I can find the magnitude of a. And then can I just use one of the component formulas to find the direction of a?
tiny-tim
Science Advisor
Homework Helper

Suggested for: Finding Vector with Known Vector and Resultant Vector

Finding a vector given a tangent vector