I don't know what all the celebration is about, but it must be a very important day in history. My neighbors seem to know something I don't.

Anyone else absolutely despise fireworks? I think they're one of the worst things in the world that don't get any attention as being absolutely terrible things.
America spends hundreds of millions of dollars a year on nearly pointless explosives where the cons vastly outweigh the pros.
Pros: It's fun for children, and adults who have the minds of children.
Cons: They are sound pollution, air pollution, dangerous, they scare the hell out of pets, and they piss off all the non-neanderthals who live in the neighborhood, especially when they occur every day for a week leading up to July 4th and January 1st.

Apparently several laws just fall by the wayside on those days and, apparently, days leading up to those days. Laws against owning explosives are gone, noise ordinance doesn't matter, and you're allowed to litter all over the place. When you're shooting explosives up into the air, that garbage will land somewhere, and the user is not expected to go find it and dispose of it.

And these things are getting louder. We used to have laws against bottle rockets. Now people are basically shooting dynamite up into the air.

As I get older, I get more and more disgusted at the people of this world.

I'm not so annoyed with fireworks except when they are launched days before the 4th or before Xmas or New Years especially when you're trying to sleep and have to work the next day. We live in Texas where everyone thinks its their God given right to light up the sky. I have one dog who is terrified of the sounds won't go out for his walk unless I drag him and then immediately upon hearing one go off wants to get back home and hide in the quietest closet in the house. Our other dog was trained as a pup to ignore loud sounds thanks to my sons rock band and his drum practice both of which practiced at our home. (band disagreements to be settled by Starcraft play but I digress).

Personally as a kid, I was fascinated by them and was a little afraid to light one up. One time my uncle light up a small firecracker but it didn't go off so he asked me to go pick it up. I hesitated and then boom it went off. I never forgot the experience realizing I could've been hurt. Our firecracker equivalent were cap pistols with rolls of caps and when we got tired of shooting them one at a time, would take the roll and hit it with a hammer for a bigger boom.
Fervent Freyja
Gold Member

Someone must have thrown a firework on you in childhood!
collinsmark
Homework Helper
Gold Member

Apparently, the inspiration for Kerbal Space Program was born out of fireworks.
http://venturebeat.com/2013/11/05/m...aunched-an-indie-darling-from-out-of-nowhere/


“It was just this very dangerous thing that I used to play with my friends with actual fireworks,” Falanghe told GamesBeat. “We’d take them apart and assemble spacecraft , I guess you could call it, with struts and fins. Then we’d make little men out of tin foil and strap them into the cockpits. We called them Kerbals. That’s how the concept was born.”​
Happy 4th of July. For hours I've been listening to people shoot off illegal fireworks in my part of town. I don't mind, as long as no one is injured. It sounds like freedom.

What is the meaning of the 4th of July? How is it related to physics and other sciences? It's about freedom. There's a reason so many great scientists came to live in America. Just think of all those Jewish scientists the demonic Hitler and his Nazi thugs would have murdered. The scientists came here and helped develop the A-bomb for the USA instead of for the Reich. Here no one cares what your background is. You have freedom. It's about the individual, not the group.

We need freedom to develop physics and other sciences. Read Arthur Koestler's great book "The Sleepwalkers." Read about Copernicus, Kepler and Galileo, and what the anti-science tyrants did to them. Read about how the forces of darkness tried to prohibit the work of scientists. But thanks to the genius Gutenberg and his mechanical printing press, there was an information explosion like the world had never seen. It's a fascinating story, and Koestler was a brilliant writer.

Here are some videos. Sorry, my project is still not completed. Meanwhile I can only provide opinions and videos. I hope they are useful.

This one may be a bit strong for some, but it should be considered in its historical context.

This one is very personal but still of general interest. During WW2, the Merchant Marine had the highest casualty rate of any branch of the service. The Marines came second. Long live freedom!

I saw a very interesting story on the TV news last night. In some places (especially where there is a high risk of wildfires), drone light shows are replacing the fireworks shows... 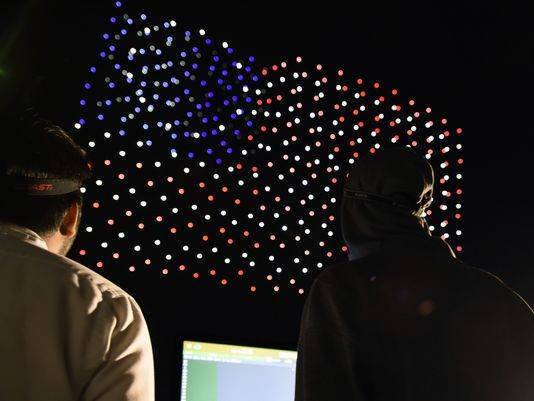 And you can re-use the drones!

We didn't venture out for the fireworks show in the next town over... too hot and muggy. But we did hear the neighborhood kids setting off firecrackers last night.
Share:
Share